Emerging markets are going to outperform developed markets like the U.S. at some point.

Is it time to dip a toe into the murky waters of emerging market equities?

The U.S. stock market continues to outperform and represents more than 50% of the value of all listed stock market companies on the planet. But the U.S. population is only about 5% of the world total and U.S. GDP is about 20% of world economic activity.

Relative to emerging markets, U.S. companies are more expensive than emerging market equities. This is probably because investors feel that U.S. markets are safer than other markets and due to a desire to hold U.S. dollars.

However, in times of crisis, most investors run for cover by returning to their home base. They also look for safety in U.S. dollar markets. A crisis can trigger a massive sell-off in emerging market equities as in the Asian crisis of 1997 when the Thailand baht collapsed overnight. Foreign debts were too large for many Asian countries when foreign investors tried to remove their investments. Emerging market countries learned a lesson from that crisis and now maintain much higher reserves to prevent such a panic. 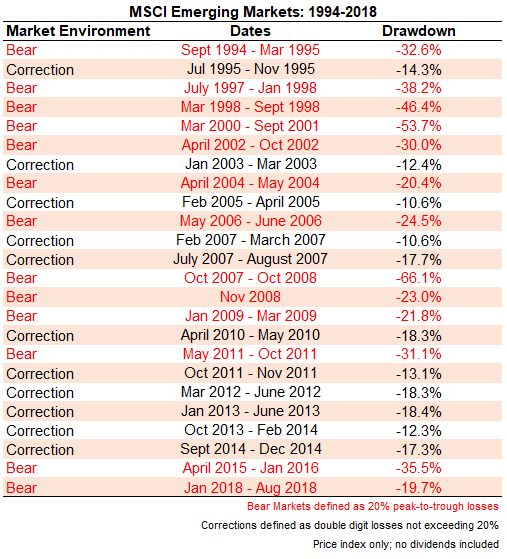 Fund manager Blackrock offers an ETF called iShares MSCI Emerging Markets ETF (symbol EEM) that holds a basket of many companies and countries. The price of this ETF (US dollars) is used as an indicator of emerging markets, and is trading this week at $43, less than double the low in 2009 of about $25.

EEM is trading at relatively inexpensive valuations today, probably due to uncertainty over global trade.

Emerging markets are much cheaper than U.S. markets but is it a good time to buy?

Trade war anxieties are the most important factor for the short term in deciding to buy emerging markets. The trade war is driven by U.S. actions and a U.S. President who believes that winning trade wars is easy. But, if the U.S. abandons its trade war efforts at some point, we might look back on this as a wonderful time to buy.

But what about the timing of the next recession? The time since the last recession is very long and the consensus is that the U.S. economy will endure a recession in 2019 or 2020. Recessions and bear markets often go together.

Given the superior growth outlook for emerging market countries and the much cheaper valuations it might be worth buying now. Or, for those who want to time it perfectly, waiting for the next bear market could pay off.

Since market timing is so difficult it could be sensible to dip a toe into the emerging markets now with the plan of adding exposure when the markets correct.