Canada could become a superpower

The dire predictions of the English cleric Thomas Robert Malthus in 1798 have proven to be incorrect, so far. Malthus predicted that rapid growth in human population coupled with slower growth in food production would lead to widespread famine and death.

Jeremy Grantham, of GMO and the Grantham Foundation for the Protection of the Environment is now making similar claims for agriculture, population growth and global warming.

Will a Malthusian catastrophe occur due to food shortages and population growth? What would happen to Canada?

Jeremy Grantham presented to the BCA Research Conference in 2003. He opened by saying, “I have never been wrong …. {long, awkward pause} … “I’ve been early”. The room erupted in laughter as Grantham was known and respected as a skeptical investor who heads a Boston-based firm which oversees more than $120 billion in client assets.

Grantham predicted the 2007-2009 global financial crisis and stock market crash as well as the bursting of the dot-com bubble in 1999-2000. Both times he was early but eventually proven correct.

So, what is Grantham predicting now?

His recent White Paper is “The Race of Our Lives Revisited,” available with free registration: www.gmo.com.

Sounding very gloomy at times, he adds to the debate with impressive analysis and research.

Carbon dioxide is essential for human life, but higher levels lead to a warmer climate. In the last 400,000 years CO2 levels fluctuated between 180 and 300 parts per million but have recently surged to 400 PPM. Over the millennia, there has been a direct correlation between CO2 levels and temperature.

World population will grow to 11 billion by 2100, requiring humans to burn enormous amounts of fossil fuels, unless there’s a decarbonization of the economy.

Africa will have the fastest population growth, going from 1.2 billion to 4.5 billion people.

Agricultural production is affected by warming temperatures, with increased fire, drought and floods. Increased water vapor in the atmosphere leads to heavy downpours that cause soil erosion.

Loss of topsoil means that food production growth is slowing.

Extreme weather events are on the rise:

Extreme Weather Events on the Rise 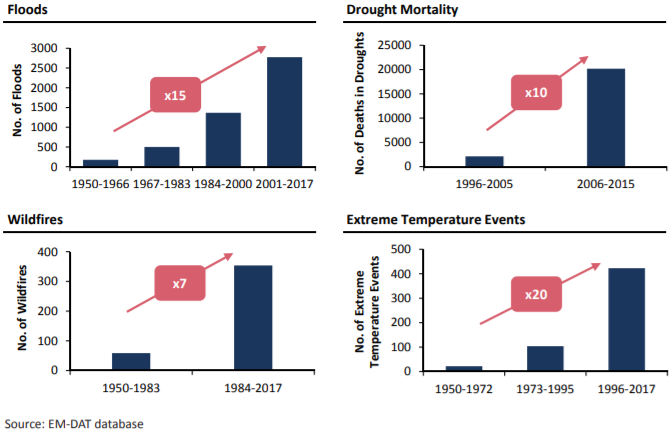 Giant wind turbines are coming in the next five years. Currently at 2 megawatts, some producers are offering 12 megawatt turbines for delivery in 2022. 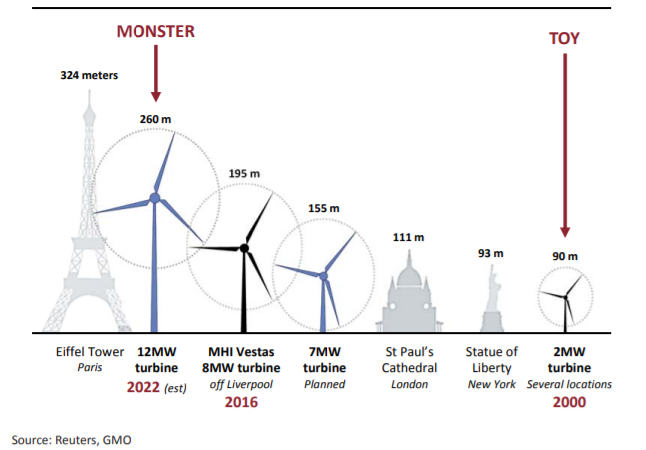 How does Canada fare in a warmer world?

While Canada’s most valuable exports are autos, crude oil and bitumen, Canada is a major agricultural exporter too. And Canada might be in the sweet spot for temperature as the farmland further south suffers from too much heat. Parts of northern Canada would be ideal for increased habitation and agricultural production global warming continues.

Canada’s population could grow to 100 million, 200 million or more.

Canada has 20 percent of the world’s fresh water supply. Shipping through an ice-free Artic Ocean will shorten routes between Europe and Asia.

And there is plenty of room. All of Germany’s 83 million people would fit into an area smaller than Alberta, at Germany’s current density.

It would be foolish to ignore Grantham’s predictions given his track record, even if they seem extreme. But, among the dark clouds, there could be a silver lining for those living and working in Canada.