Mother nature, not a bubble

Canadian housing myths are plentiful. But a new myth popped up recently in the form of a suggestion that “mother nature” is pushing house prices higher in Vancouver and Toronto.

Is “mother nature” driving house prices in those two large cities? Does that mean it’s not a bubble?

Many people, including former Ministers of Finance, have perpetuated the myth that Canada’s house prices are not a problem, except in Vancouver and Toronto, where special factors support their elevated house prices.

The special factors most often mentioned for Vancouver are a lack of land as it’s wedged between mountains and the Pacific Ocean. And for Toronto the justifications used are phrases with little or no meaning like “world-class” and alleged record levels of immigration and population growth.

But now there is a new term to justify the bubble.

Recently the governor of the Bank of Canada, Stephen Poloz, suggested that “mother nature” was responsible for house prices.

As quoted in Bloomberg on June 4:

After years of hand-wringing over foreign investment in Canada’s most-scrutinized housing markets, Bank of Canada Governor Stephen Poloz argues fundamentals are at work as prices climb back in Vancouver and Toronto.

“A year-and-a-half ago we had the changes in the Vancouver market and there was an initial effect and then a bounce back, and that just shows you that Mother Nature is still there – that the fundamentals for housing remain quite strong,” Poloz said in an interview with BNN Bloomberg late Friday in Whistler, B.C.

“And I think the same thing is there in Toronto – that’s what it looks like. There’s very, very strong fundamentals.”

Poloz goes on the talk about the debt that’s been created during the housing bubble and says that current changes in regulatory measures are designed to make that debt more sustainable. He expects that the financial burden will become “more bearable with time”.

The argument that fundamentals in Vancouver are strong and therefore price gains, almost five-fold since 1999, are not unusual is ridiculous. For one thing, Vancouver has always been in the same location and there have been serious house price corrections in the past, although not recently.

And the argument that price gains in Toronto, approaching four-fold since 1999, are justified by high levels of immigration and the notion of a “world-class” city is equally nonsensical. The rate of increase of Toronto’s population has been about average for Canada, and for the five years between 2011 and 2016 that rate of increase was only slightly more than half that of Calgary. But people repeat these myths so often that they become part of the lexicon and get picked up by people in authority like central bankers.

Three years ago, on May 20, 2015, the-Minister of Finance Joe Oliver made a similar “there is no bubble” comment:

The reality is very different. There is a serious bubble in Canadian house prices and it’s widespread across large cities and most smaller ones too.

Prices in the top six markets have tripled, quadrupled and even quintupled since 1999 in all major Canadian cities, an unprecedented increase in prices in such a short time. 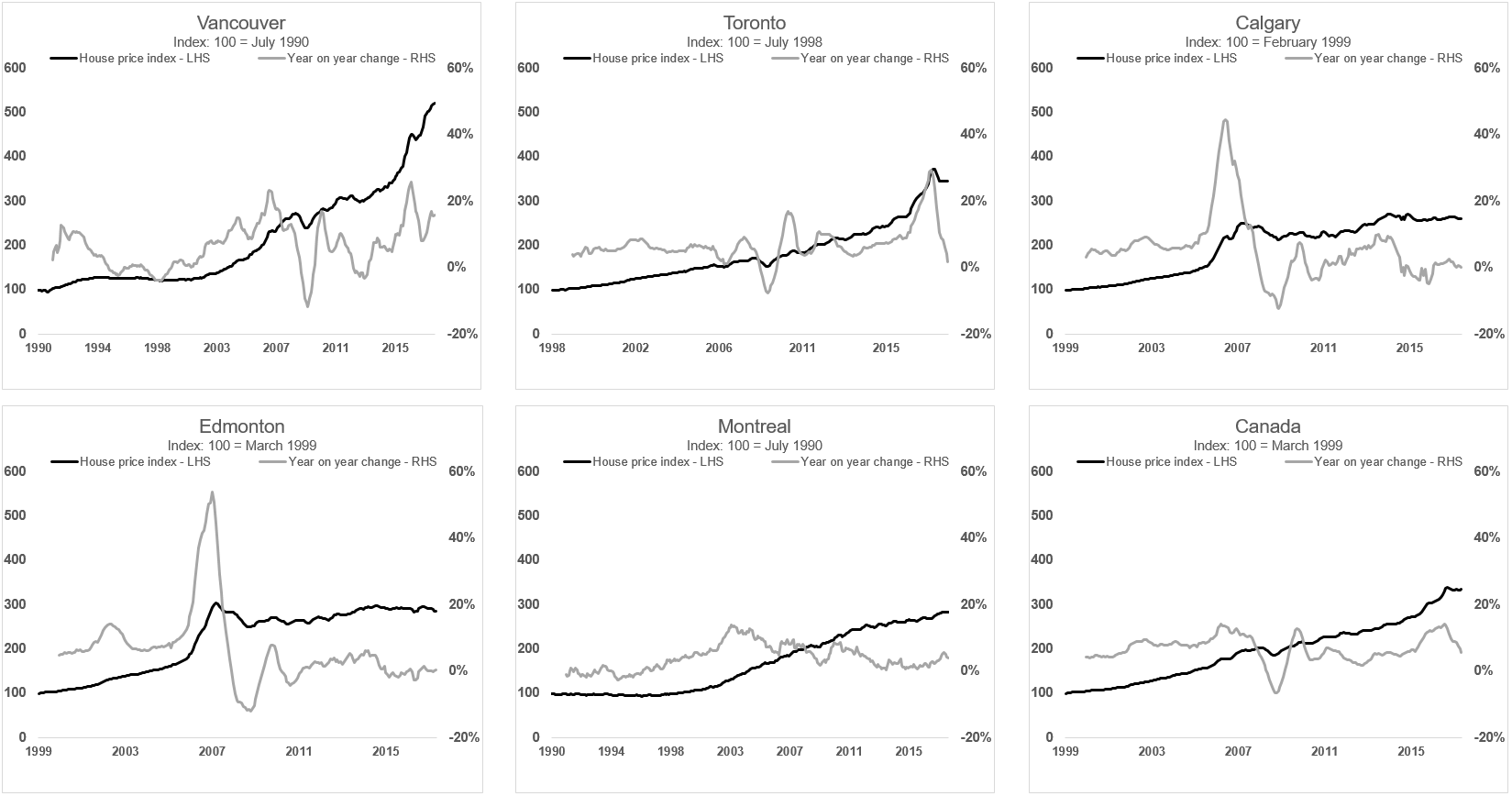 Regarding “mother nature”, Canadians shouldn’t need to be reminded that nature can be harsh at times. Every winter we get that message.

But wise people do make plans for those hazards and take preventative action to mitigate the damage.

If only Canadian leaders had made similar plans for when this housing bubble bursts, instead of denying the risks.