The price of crude oil pushed above $70 in the last week, bringing back memories of previous oil shocks that shook the world. In decades past, oil price surges have been highly correlated with the onset of economic downturns.

Is this latest move to higher oil prices going to interrupt the economic recovery this time?

In the 19th and 20th century oil prices have been a key factor in the cycle of economic growth and recession. It has been a decade since the onset of the last U.S. recession and that recession was accompanied by a surge in oil prices. A paper published in the National Bureau of Economic Research, “Historical Oil Shocks,” by James Hamilton of the Department of Economics, University of California, San Diego, shows the impact of price surges like the one we are now experiencing. The paper is here.

The column headed “price increase” refers to the price of crude oil.

While some people, like me, might react by thinking the connection between oil and automobiles and the economy is weaker than in the 1970s another paper published by NBER, “Oil, Automobiles, and the U.S. Economy: How much have things really changed?” by Valerie Ramey and Daniel Vine finds that the relationship is still strong.

So, what about this time?

According to Hamilton, supply disruptions from dramatic geopolitical events are the cause of several episodes of oil price increases and recessions.

The unilateral abrogation of the Iran nuclear accord by U.S. President Donald Trump might be the catalyst this time, as a geopolitical event like some of the other events. Iranian exports of about 2 million barrels a day could be restricted by sanctions that will be re-imposed. The reaction of other countries like France in sending their most senior politicians to try to convince Trump not to walk away from the deal indicates how important the deal is to some countries in Europe.

Several of the episodes that preceded recessions had substantial Iran involvement, as in the 1973 OPEC embargo (Iran is a founding member of OPEC), the 1979 Iranian revolution and in 1980 with the Iran/Iraq war.

But perhaps the U.S. won’t be impacted as much this time. One factor is the U.S. is once again a major producer of crude oil. 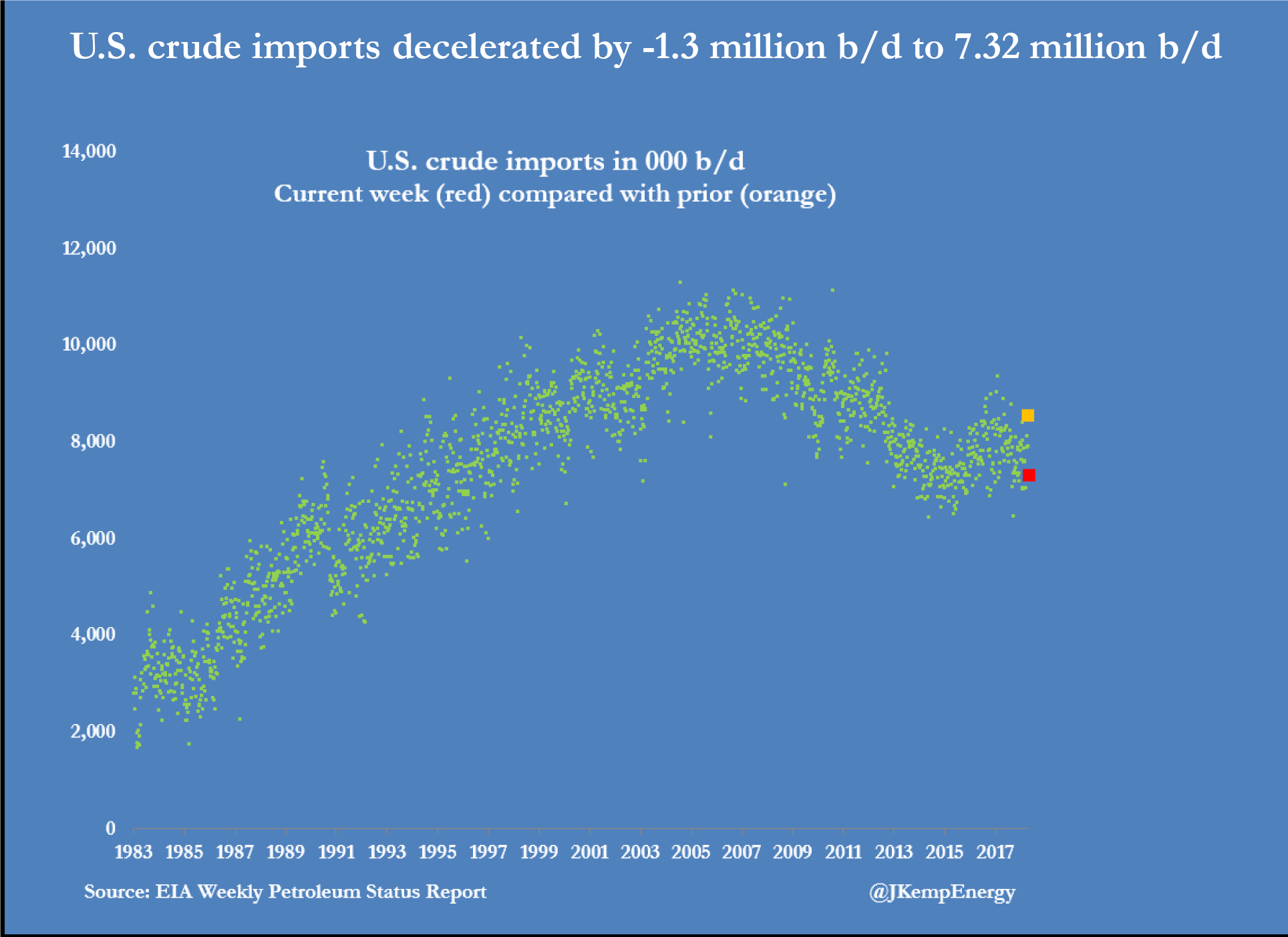 The red square is the latest data point.

As discussed in previous notes the U.S. is rapidly becoming more self-sufficient in energy. Crude oil exports of 2 million barrels per day are balanced against imports of between 7 and 8 million barrels a day.

Most of the imports come from Canada, currently 3.5 to 4 million barrels a day. With the surge in prices U.S. shale oil production can be expected to increase to record highs, reducing the need for Canadian imports.

Perhaps this latest change in the world’s crude oil markets will be the exception to the rule that oil price surges precede recessions. But the possibility that the oil price increase and the Iran turmoil eventually pushes the economy into recession deserves our attention.

Watch for further oil price surges and geopolitical events in the Middle East and be prepared for the likely adverse impact on economic activity in the U.S. and the world.