The U.S. government recently enacted deep tax cuts that were designed to boost the economy.

But tax cuts could mean smaller government revenue, and projections for deficits in government spending indicate huge increases in total government debt over the next decade and beyond.

Will tax cuts be a plus or a minus for the US over the medium term?

The US government approved generous tax cuts in early 2018, giving companies a boost in after-tax earnings by cutting the corporate rate from 35 percent to 21 percent. The quarterly results for publicly-listed companies are running 20 percent higher than last year, mostly based on lower taxes payable and a recovering economy.

Financial companies are some of the biggest beneficiaries of the government largesse. It’s not clear how increased after-tax profits will boost the economy since most of the big banks are desperate to start paying large dividends again, after a decade of regulatory pressure built up capital. Banks also are not known for capital investment and their payrolls have been shrinking due to technological advancements. Perhaps the cuts will indirectly help the economy when shareholders re-invest or spend those dividends.

Along with a jump in profits for companies the tax cuts will lead to bigger deficits for the federal government, due to lower tax revenue.

The projections for future government deficits are shocking. Here’s a chart comparing the US to other jurisdictions, showing ever-increasing borrowing requirements for years: 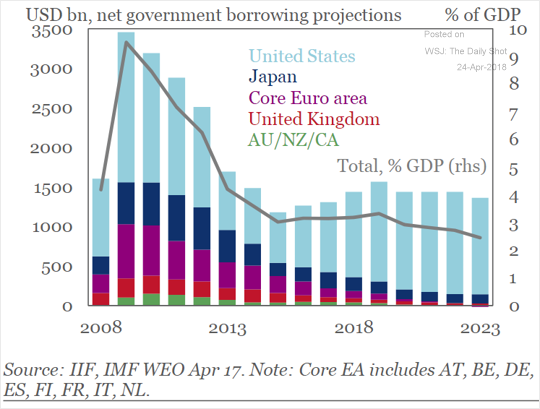 The large blue shaded area in the graph shows the US borrowing requirements while the other areas like Europe and Japan are tiny in comparison. The US does have the benefit of being the reserve currency for the world which means that many countries that sell products to the US — like China and Japan — are likely to continue to leave their profits in dollars and buy U.S. government debt (Treasuries). But there’s no guarantee they will continue to do that forever.

The US government is not at serious risk of having an unmanageable amount of debt, yet. At about 110 percent of GDP the U.S. government debt level is comparable to other developed countries.

As Shawn Tully wrote in Fortune on March 2018:

“By 2028, America’s government debt burden could explode from this year’s $15.5 trillion to a staggering $33 trillion—more than 20% bigger than it would have been had Trump’s agenda not passed. At that point, interest payments would absorb more than $1 in $5 of federal revenue, crippling the government’s ­capacity to bolster the economy, and constraining the private sector too. Contrary to the claims of the President and his supporters, the U.S. can’t grow fast enough to shed this burden.”

President Reagan tried something similar in the 1980s and was forced to reverse course by RAISING taxes a few years later, as the budget deficit soared. Here we see that the U.S. Debt/GDP from 1980 to 1990 increased by 50%, most of which occurred during Reagan’s eight years. 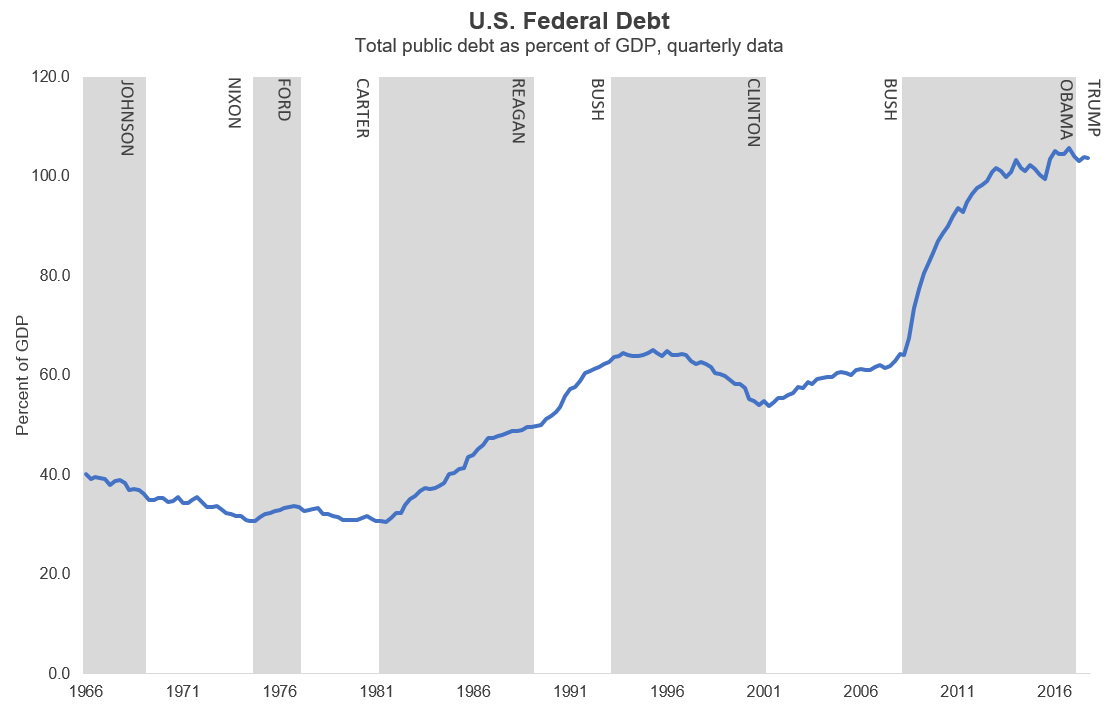 Opting for rapid economic growth through tax cuts during the good times usually doesn’t work because the economy is already at full capacity. Tax cuts can cause wage inflation and create shortages, without any long-term impact on growth.

And when the next downturn comes, likely in 2019 or 2020, the government will have few options to stimulate the economy because of already large deficits and increased debt load.

So far business leaders have applauded the tax cuts, but those same leaders might start demanding more austerity and cuts to government programs during the next downturn, which could make the recession even more severe.

We do live in interesting times.