Energy fails to perform in a benign environment

The Toronto S&P/TSX index was down about 5 percent in the first quarter of 2018, while the important energy sector index (S&P/TSX Capped Energy) was down even more, by 8 percent.

This was during a time of higher oil prices worldwide. In the US, energy companies listed on the stock market show a similar pattern of underperformance.

Is the energy sector trading at bargain prices? Or are “cheap” stock prices signaling that there’s something fundamentally wrong?

Craig Basinger, Chris Kerlow, Derek Benedet and Shane Obata of Richardson GMP Ltd. tackled this question in a recent report called, “Market Ethos: Energy Not Adding Up”. You can access the report here.

The authors point out that energy stocks are lagging the fundamentals.

As the Market Ethos report points out there are some positive things happening in the market.

Demand has been greater than supply.

The oil glut on world markets is mostly gone.

OPEC has kept a lid on production.

The Credit Suisse (CS) strategist Jonathan Golub, who had been bearish on the sector, recently upgraded it to market neutral. He points out that earnings in the sector have been rising since mid-2016 although the sector is still overvalued. But CS decided to take the sector “out of the penalty box”.

There are several different components in the sector such as integrated companies like Suncor and Exxon-Mobil and “upstream” producers that concentrate on finding and producing crude oil and natural gas.

Here’s a chart that shows how overvalued energy has been since about 2015:

Stock prices in the energy sector didn’t drop enough to reflect the collapse in earnings that followed the peak in oil prices in 2014. And it’s important to note that the S&P 500 is expensive as we’ve written about recently. That makes the energy sector valuation seem stretched even when compared to an expensive market.

But what matters to the market is how the sector will perform in the next 24 months. And earnings are expected to rise very quickly, at least in the U.S.

Growth of 70 percent in earnings is the consensus forecast, according to CS. Analysts are very optimistic that the companies can show much better results.

But even such rapid earnings growth is not enough for CS to rate the sector as “overweight”. Their top picks are Technology, Financials and Consumer Discretionary, while they are “underweight” Utilities, Telecom and REITs.

As the Richardson GMP report notes there are at least two headwinds the sector must confront.

First, there is the issue of shale oil production which keeps surprising in its growth. The U.S. is now producing more than 10 million barrels of oil per day with most of the new production coming from the shale producers, and most of that from the Permian Basin in west Texas. Technology improvements have led to some stellar results by shale producers.

As well, the short-term outlook is clouded by record high levels of speculation in the futures market for crude oil. The “longs”, traders who are betting on higher prices, vastly outnumber the “shorts,” who expect lower prices. When the trade is this one-sided it is considered a negative sign for the price of any commodity as the “longs” could be forced to liquidate in a rush if prices drop. 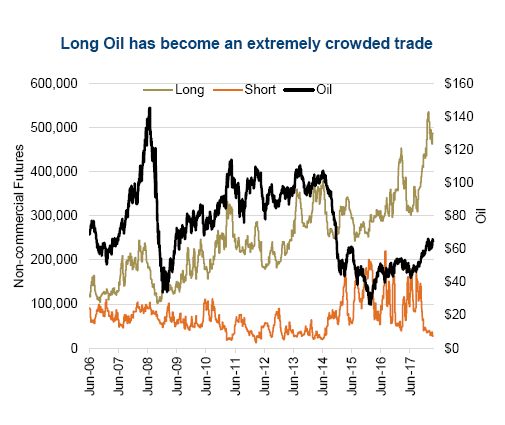 The bottom line is that the energy sector, although improving, is not cheap enough yet to warrant new investments. We have a zero weighting in energy now and will wait for better fundamentals and more extreme bargains before getting enthusiastic again.