There is significant and growing interest in electricity storage, sometimes for a very short period measured in minutes. Battery storage systems are gaining followers.

Storage allows electricity that is produced by renewable energy such as solar and wind to be used later, at a time of peak demand.

Will advances in storage disrupt companies engaged in electricity production? 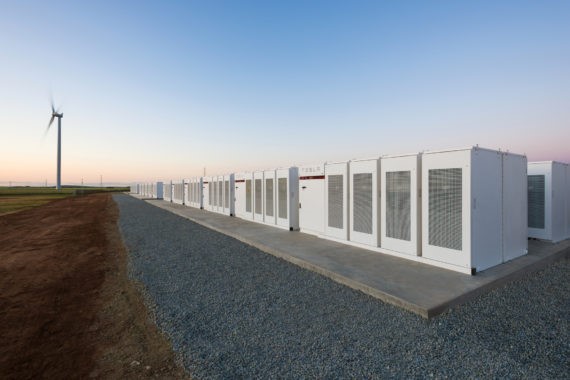 Tesla completed a grid-scale storage facility in Australia in September 2017, powered with lithium-ion batteries. The 129 MegawattHour facility was completed one day short of the 100 days promised by the contract.

Australia was forced to act by severe disruptions to power, caused by a lack of capacity on the grid during times of peak demand in Australia’s summer heat. The storage was installed next to a wind farm and is designed to prevent blackouts.

In 2018 Hyundai will complete a similar facility on the southeast coast of Korea that is 50% bigger than Tesla’s Australia installation. This facility will be used to help run a zinc factory during peak times.

The use of such facilities eliminates the need to build “peaker” plants that only run occasionally but are still expensive to build and maintain.

Electricity storage systems have been around for years but not in battery form. The most popular method has been “pumped hydro” and involves two reservoirs for water storage. During a period of excess power production, the electricity is used to run electric pumps that move the water to the higher reservoir. Then during a time of peak demand for electricity the water is released to fall over the blades of a turbine to produce electric current. About 98% of storage worldwide was of this type until recently.

Both Samsung and Panasonic are producers of this new type of battery storage. Tesla is partnered with Panasonic in its Gigafactory in Nevada that manufactures battery packs for Tesla autos as well as Powerpacks.

And in China battery production will soon equal 4 Tesla Gigafactories, according to Bloomberg.

Bloomberg New Energy Finance says that costs for battery storage at the grid level are plummeting and will continue to drop until at least 2015. 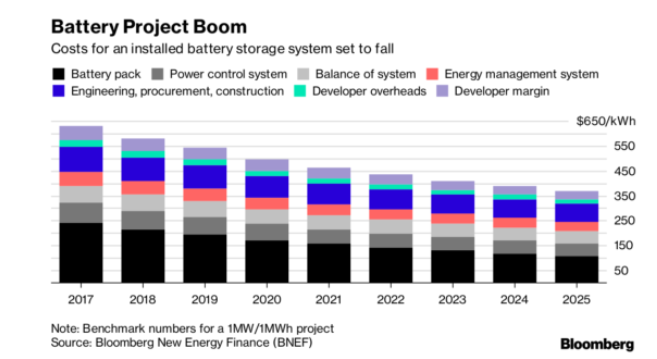 Technology advances in areas like shale oil production have advanced much more quickly than even the most optimistic forecasters were able to see. Battery storage could be like that too, if costs keep falling.

At the beginning of the shale oil revolution about a decade ago I remember hearing many well-informed people doubting the future of shale. It was hard to see then what the shale companies have been able to achieve.

Companies that will be affected negatively by battery storage are those that manufacture gas turbine equipment like General Electric and Siemens. But both those companies are involved in aspects of renewable energy too.

Companies that are well-positioned to benefit are battery makers like Panasonic and Tesla as well as Johnston Controls and Samsung. Others that could be involved are ABB, Schneider, Parker Hannifin and Siemens as well as a myriad of smaller companies. We own Panasonic for ourselves and our clients.

For all these companies, battery storage is not big enough yet to be a deciding factor. For example, for Tesla the success of its Model 3 car will be more important in the short term.

Battery storage is a new field that could disrupt existing systems and create big winners and losers, and therefore warrants close examination on a regular basis for new opportunities and threats.