Over the last few years there have been many rule changes regarding housing finance and foreign ownership in Canada.

The most recent changes were implemented by the B.C. government with measures targeted at non-resident buyers, called a “speculation” tax.

Is the B.C. government about to cause a crash in the housing market?

Here’s a recap of some history:

Stephen Harper was elected with minority government status in 2006 and by the end of that year Finance Minister Jim Flaherty pushed through changes to Canada Mortgage and Housing Corporation (CMHC) rules that allowed 40-year amortization of mortgage loans and zero down payments, in spite of warnings from some circles that these moves would boost an incipient housing bubble. These rules stayed in place for a couple of years, with more than half of all new mortgage loans in 2008 opting for the maximum 40-year term.

Starting in 2008 the rules have been gradually tightened, first by the Harper government and then by the Trudeau government but the changes have been measured to avoid a precipitous slowdown in the residential real estate industry. 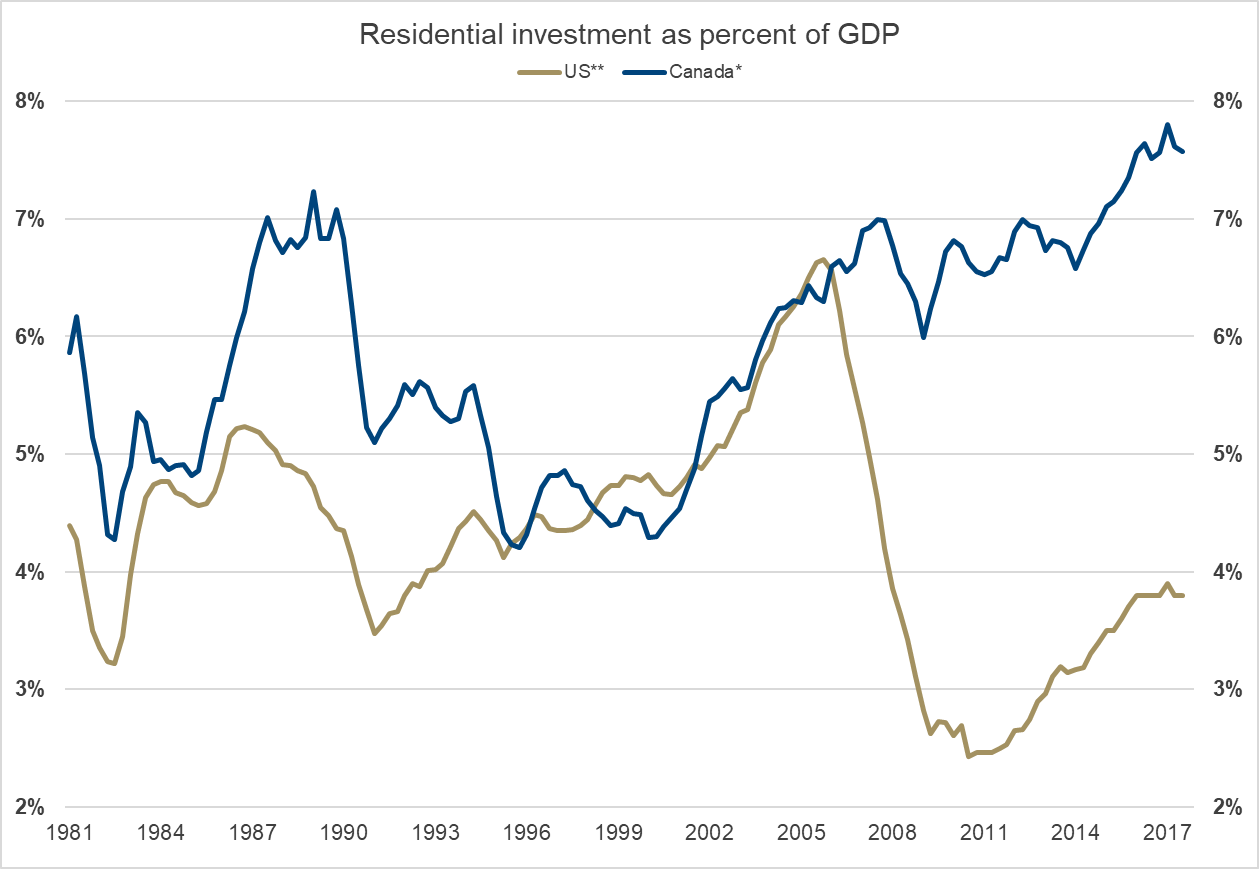 These light-touch tweaks in the rules haven’t worked as residential investment hit 8% of GDP in 2017, a record that is higher than the U.S. peak, reached in 2006 just prior to their housing crash. Toronto and Vancouver house price indices are up more than two-fold in eleven years.

But starting in late 2016 the rule changes have had more teeth. Government leaders admit that they would like to see an end to the housing bubble, if only in the form of a soft landing. After one late 2016 change by federal Finance Minister Bill Morneau that unleashed vocal protests and warnings from the real estate industry of “unintended consequences”, CMHC head Evan Siddall wrote an op-ed article in the Globe and Mail, stating that the changes were “fully intended”.

The latest uproar — February 21, 2018 — is over the B.C. budget that targeted foreign buyers and speculators. The “speculation” tax is causing stress in Alberta because it applies a 2% charge to housing that is owned non-residents of B.C. unless the house is rented on a long-term basis or if the owners pay B.C. income tax. Albertans hold vacation or retirement property in Kelowna or Victoria and let it sit empty for most of the year, using it only for one or two months per year until they become resident.

In a brave statement B.C.’s Finance Minister Carole James said that her intent was a house price downturn, saying that “we need to see a moderation”. She is right that affordability can be reintroduced only with a decline in prices, but homeowners might not agree with her intent.

The uproar in Alberta is loud.  Many wealthy and some not-so-wealthy Albertans experience FOMO (Fear Of Missing Out) based on their belief that prices will only rise, so they buy ahead of the time that they need their dream place.

So the various changes over the last couple of years will hit the demand side such as foreign buyers, first-time buyers with stringent stress tests and the non-resident buyer hoping to retire on the west coast someday. These are the main sources of new money into the B.C. housing market. Since many of these changes were brought in by the federal government it would be unfair to place the entire blame on the B.C. budget.

We are about to find out what happens to a housing market when key elements of demand are weakened simultaneously.

There is some good news. For non-residents who hope to retire in B.C. and first-time buyers who haven’t bought yet, it will be very nice to see some house price “moderation”.