What to do with expensive stock markets

The Shiller Cyclically-Adusted Price-to-Earnings (CAPE) Ratio for the S&P 500 is showing that the U.S. stock market is expensive. The valuation premium is unmatched, except for the 2000 peak.

Are valuation measures like the CAPE warning investors to avoid the U.S. stock market?

Robert K. Shiller examined stock prices and earnings of the companies in that index back to 1881 and, after adjusting for inflation and using a ten-year average, this is what he got:

Shiller states that investors appear to depend exclusively on the past as a guide, since forecasting the future is difficult, if not impossible. That’s what makes these peak valuations possible, as investors extrapolate good returns in the past to even better expected returns in the future.

As Shiller explains in this recent 3-page paper the past is a poor guide to what will happen in the future. In the stock market, the future is likely to be different from the past, measured on a ten-year average basis.

Some have argued, not successfully in my opinion, that the Shiller P/E should be ignored this time because interest rates are very low, or tax rates in the U.S. have just been cut or just simply “this time is different”. But other experts have shown that these objections are not valid.

James Montier of GMO published a report in August 2017 that predicts that the excellent returns of the past will lead to poor returns in the future.

“It is remarkably easy to assume that the recent past should continue indefinitely but it is an extremely dangerous assumption when it comes to asset markets. Particularly expensive ones, as the S&P 500 appears to be.”

Today’s elevated P/E ratios and profit margins are likely to revert back to lower average levels or even below average for a while. Here’s GMO’s 7-year forecast: 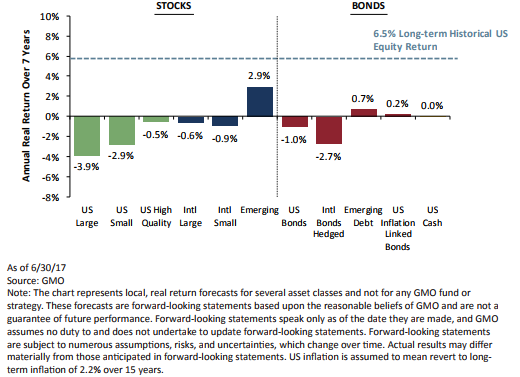 The only positive returns are Emerging market equities and debt! U.S. large cap stocks are likely to have the worst returns, according to GMO. With the growing popularity of passive investing, through ETFs, most people are likely to be heavily invested in that segment of the market, meaning that the predicted mean reversion will be more painful than the correction after the 2000 peak.

You can see in the dotted blue line that the long-term average return for U.S. equities is very good, at 6.5 percent after inflation. At that rate of return stock market assets double, in real terms, in about eleven years. So the message is not to give up on the market entirely, but be careful with today’s valuations and recognize that these are not normal times.

Resisting the lure of rapidly rising markets is difficult because it is hard, even impossible, to watch everyone else get great returns while sitting on the sidelines. The stock market euphoria of today is similar to previous bubbles like the Technology, Media and Telecom craze in 1996-2000. And hot markets can last for years, making them even harder to resist.

“Markets can stay irrational a lot longer than you and I can remain solvent.”