One year ago I wrote about the biggest bond market rally in history that had been in place since 1981, when benchmark bond rates peaked at 15.8 percent. Now, after more than 36 years of drifting lower, interest rates on government bonds in the U.S. (and Canada) have pushed higher. The 10-year US government bond generated a paltry yield of 1.45 percent in July 2016 but now offers 2.55 percent.

Are rates heading to even higher levels, meaning that a bear market in bonds has started?

Some respected bond market gurus are worried that much higher rates are just around the corner, which would have serious implications for markets — both bonds and stocks. 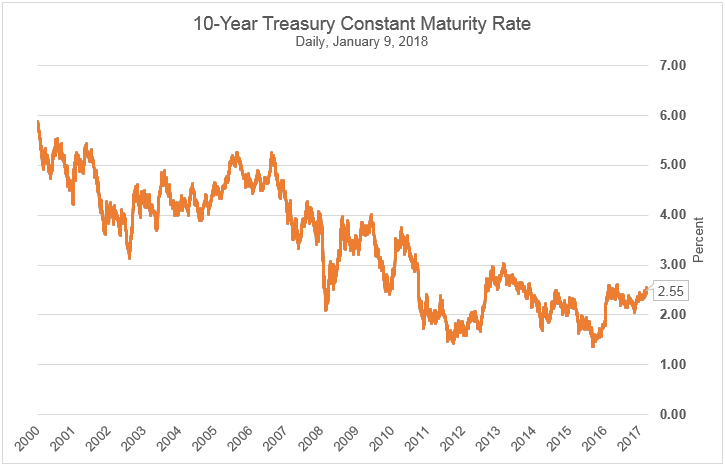 Rates bounced from the same low point twice, in 2012 and mid-2016, which could mean a change from bull market to bear market for bonds, because as interest rates rise, bond prices drop.

A decade ago, prior to the Global Financial Crisis, rates were between 3 and 5 percent and that was normal, and the economy did pretty well then too. Now the economy is growing, and the Fed is hiking their short term rates. So the idea that 10-year rates are heading higher is gaining credence.

One of the most famous bond experts, Bill Gross, has made the “bear market” call. His post from January 2018 states clearly that the low point in yields was reached eighteen months ago.

In January of last year Gross wasn’t sure about a bear market. He said that rates would have to rise to 2.60 percent to change his mind. Well, now he’s certain that the trend has changed direction.

Another recognized expert in bonds, billionaire investor Jeffrey Gundlach expects rates to rise. He made this call, a change from his previously bullish view, in October 2016 at a NYC conference that I attended. More recently he expanded that call to include a forecast that the stock market will fall in 2018.

Gundlach might be right because higher bond rates can also make riskier assets like stocks less rewarding. As the risk-free return on bonds rises risk assets must compete, and often, but not always, that means stock prices fall. The price people pay for stock market earnings is close to all-time highs, and higher rates tend to reduce that premium.

The trend toward lower rates had been in place for a very long time. If that trend is reversed and rates move higher for a multi-year period, at the same time as inflation picks up, prices on all securities will react. The economy could go into recession if rates go too high, as fewer people will borrow money to buy things when loans will be more expensive and more difficult to get.

One interesting note on the previous trend from higher to lower rates:

Almost everybody working today as a bond trader, portfolio manager, loans officer, derivatives trader or mortgage broker started their career after rates had started to fall. So they’ve never experienced anything but lower and lower rates. It will be a big adjustment for them to adapt to a different trend.

In 1981 inflation was 12 percent so rates at 15 percent seemed almost normal. Today it’s a very different environment. Even 4 percent today would be a shock.

So don’t be surprised if rates go higher than most people expect. That could be the Black Swan event of 2018.