The retail industry is in big trouble

Retail spending per square foot at American malls has been in decline for years. Reports of store closings by large retail chains like J.C. Penney, Walmart, Sears, Kmart and Macy’s are almost a weekly occurrence. Smaller chains disappear at an alarming rate.

Are these signs of a complete meltdown in the business model of bricks-and-mortar retail?

A Bloomberg story about difficulties in the retail industry caught my eye, as I’ve written about struggles of retail stores and shopping malls before, in a Weekend Note in December 2015.

At that time, shares of the on-line behemoth Amazon Inc. were trading on the stock market at $666. Recently they touched $1,135, a total value of $545 billion.

The “Amazon effect” continues and there’s no hint that struggles in the retail sector are over. In the recent past RadioShack, The Sports Authority, Payless Shoes and Toys ‘R’ US have all declared bankruptcy.

He claims that America is vastly over-stored while online is killing everyone in the space. He predicts that employment in retail will decline drastically. Davidowitz says America has five times the space that other countries like England, Japan and France have. Most of this space was built with borrowed money and is no longer needed.

The rise of Amazon and e-commerce is just part of the story. E-commerce, so far, is less than ten per cent of total sales. A bigger problem for the sector might be the heavy debt load that retailers carry.

The Bloomberg story “America’s Retail Apocalypse is really just beginning”, explains that leaders in the retail industry opened 3,000 stores, but the bad news is they’ve closed more than 6,800 stores in 2017. Macy’s closed 68 in 2017 while Sears and Kmart closed 358 stores in 2017 and have announced 63 more closings in January 2018, according to this November 3 report. 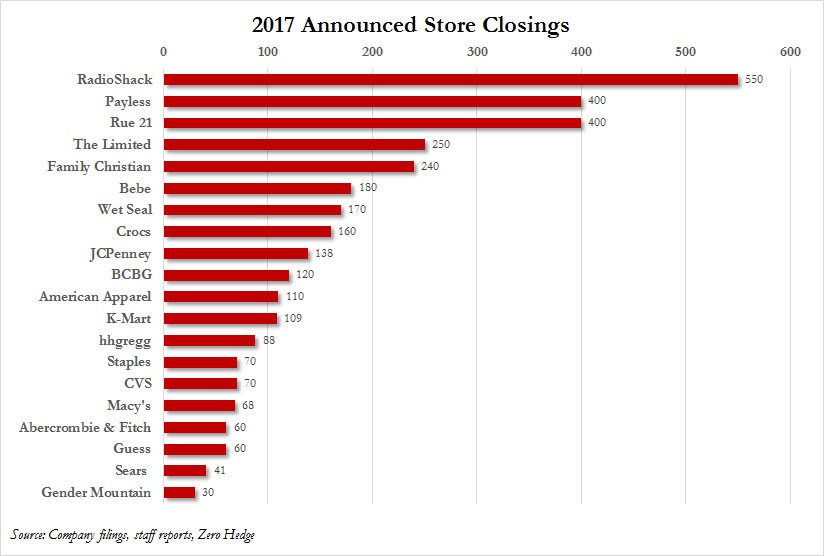 Heavy debt loads carried by retailers are likely to become a bigger problem as the Federal Reserve triggers interest rates increases due to a stronger economy and unemployment rates near 4 per cent. The Fed has done two rate increases in 2017 and there might be a third increase in December. Many economists agree with rate hikes as they argue there is no justification for continuing the policy of extremely low interest rates.

The retail sector isn’t ready for a rising rate environment. For example, shares of JC Penney (JCP on NYSE) hit an all-time low recently after a reporting a loss. Total market cap is under $1 billion with debt of $3.8 billion, a precarious balance sheet that might short-circuit any share price rally. Shares declined from $12 to less than $4 in eighteen months, but bottom-feeders are hesitating, with good reason.

According to Real Capital Analytics, the eight largest publicly-traded retail chains owe a total of $24 billion in debt.

Macy’s, a much bigger chain than J.C. Penney, trades near $20, down from $75 two years ago. The equity value of Macy’s is about $6.1 billion, with a debt of $6.8 billion, a highly levered balance sheet but better than J.C. Penney.

Debt loads like these are normal in the industry and will impede efforts of traditional retailers to reposition their business into the e-commerce era. While there will still be many retail stores a decade from now, the transition to a new business model will claim many victims.

So if you receive a gift card as a present, go ahead and buy something to claim the credit without delay. After bankruptcy, gift cards are worthless.