The chair of the Fed is up for grabs

The expiry of the first four-year term of the chair of the Board of Governors of the Federal Reserve System (Fed) is just a few months away, on February 1, 2018.

Chair Janet Yellen was appointed four years ago by Barack Obama. Normally the chair of the Fed is reappointed for a second term. But, according to Washington insiders, Yellen’s reappointment is far from secure.

Will a new Fed chair will be announced? If not Yellen, then who?

Janet Yellen challenged President Trump in public after he was elected but before his inauguration. As I noted here in January, she said in her press conference after hiking rates on December 14, 2016:

“So I would say that fiscal policy is not obviously needed to provide stimulus to help us get back to full employment. But, nevertheless, let me be careful that I am not trying to provide advice to the new Administration”.

Donald Trump might have fumed over that comment because it contradicts many of his economic policies such as tax cuts for individuals, tax cuts for corporations, de-regulation, increased defense budget and more infrastructure spending.

Donald Trump also has stated that he doesn’t like a Fed that raises interest rates but that’s exactly what Yellen’s Fed has done, several times.

During his election campaign Trump said that Yellen is “more political than Secretary Clinton” and she “should be ashamed of herself” for creating a “false stock market”.

But that was then and this is now.

More recently Trump has softened saying that “I like her, I like her demeanor”. According to this CNN story.

If Trump decides to make a change, who is likely to replace her? One of the leading candidates is not exactly a household name. 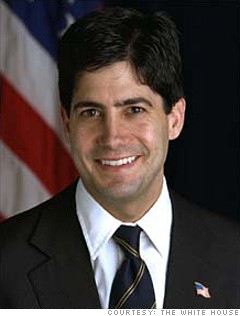 I attended a BCA Research conference a year ago and Kevin Warsh was the keynote dinner speaker. He is touted as a replacement for Yellen. He has experience as a Governor of the Fed, during the difficult times of the Global Financial Crisis. And he’s a Republican.

He’s not an academic economist like Bernanke but he is known in policy circles. He’s a distinguished visiting fellow at Stanford University’s Hoover Institution, a member of the exclusive Bilderberg Group and the elite “Group of Thirty” of leading financiers and academics.

He has experience on Wall Street with Morgan Stanley and experience in Washington in advisory roles under President George W. Bush. He was appointed by President Bush to the Fed as the youngest member ever, at 35 years old, in 2006.

Although his term would have continued until 2018, he resigned in 2011 after criticizing the QE program. He maintained that the Fed was taking on too much responsibility for stimulating the economy by using extremely low interest rates.  He preferred other policies, saying that using interest rate policy exclusively lets other people, like Congress, off the hook. Before he resigned he wrote an op-ed for the Wall Street Journal, which can be found here.

In that article Warsh makes a plausible argument that additional interest rate measures from the Fed are not as good as pro-growth actions like tax code reform and regulatory reform. He also argued against protectionist trade policies. President Trump probably would agree with the first two and disagree with the third.

Warsh is married to Jane Lauder, a granddaughter of Estee Lauder. He’s independently wealthy and has already demonstrated a tendency to independent thinking during his time on the Fed. Most Presidents prefer a Fed chair who is more malleable. So his chances of sitting in the Fed chair next February are probably only 50/50, at best.

My impression as he spoke to that conference a year ago was that he would very much like to have the job as chair of the Fed.

Keep your eyes on news about the Fed. The next three months will be interesting.