Almost twenty-eight years ago Japan’s stock market and housing bubble peaked. That country has been going through a massive correction called a “balance sheet recession” for much of that period, although recently signs of improvement can be seen.

The term “balance sheet recession” was coined by Richard Koo, author and economist from the Nomura Research Institute.

As the Bank of Canada is trying to normalize monetary policy while slowly deflating a housing bubble, it’s timely to have a look at Koo’s thesis.

Will a Japanese-style “balance sheet recession” come to Canada and will Canadians listen to Koo’s warning?

Let’s start by taking a look at what happened in Japan. The bubble that burst in Japan’s stock market was massive while the real estate bubble was comparable to more recent housing bubbles in Canada and Australia. 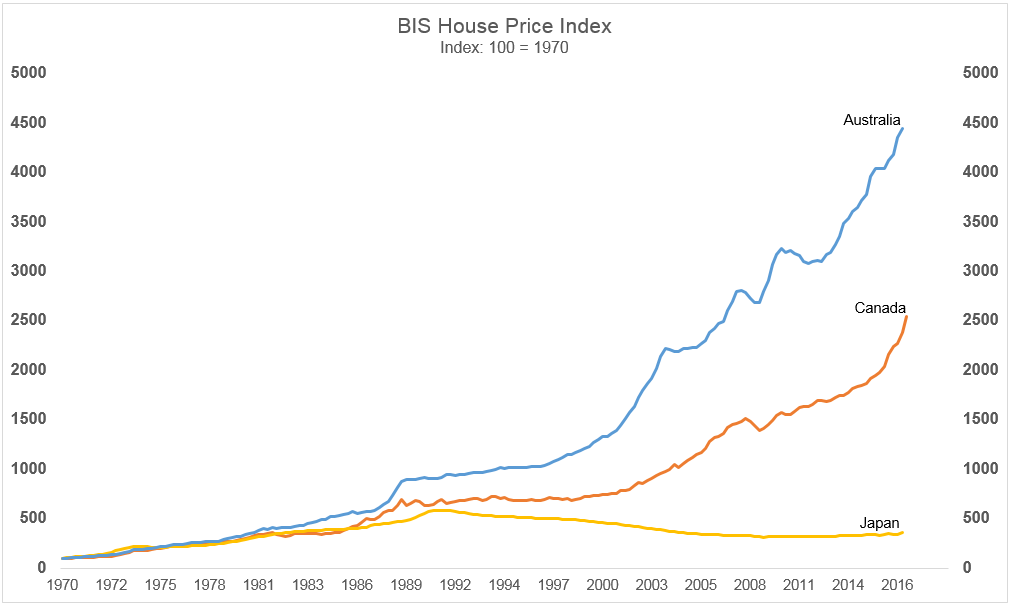 In an interview with Richard Koo, published in MacLean’s in 2015, Andrew Hepburn asks Koo if what happened in Japan could happen in Canada. Koo said, “In the Japanese case it was the corporate sector that went crazy during the bubble days. The household sector was very conservative, didn’t borrow very much, but the corporate sector borrowed massively. It was the corporate debt repayment that sunk the Japanese economy even with zero interest rates. In the Canadian case it’s the reverse. Canadian companies didn’t borrow that much. In fact, over these years Canadian companies actually saved money and it was the household sector that borrowed money… so there are differences like that. But the fact that one group, one major group of the economy has been borrowing money on ever-rising asset prices, the house prices, is a cause for worry. At the moment, everything is making sense, but if something should happen to house prices, all the problems that accumulated over the years may suddenly come to the surface with the debt levels”.

In a Nomura research report released in 2015 on Canada and Australia Koo compares the two economies that are similar in many ways. They are small, open economies, dependent on export of natural resources such as crude oil, liquefied natural gas, coal, iron ore and other commodities with the U.S. and China as the large customers. And people love housing as an investment in both countries.

Canada and Australia were also unique as two countries where house prices continued to rise after the Global Financial Crisis. In most countries home prices fell after 2008, in some cases as much as 50 per cent. Koo points out that both countries are favorite destination for Chinese migrants and investors, which helped prop up prices.

In Canada households continued to borrow, while in Australia that sector became a net saver, meaning households, in aggregate, paid down loans in excess of new borrowings.

Koo says that in Canada “if house prices were to fall for some reason … the balance between household sector’s asset and liabilities could suddenly collapse, leaving behind large liabilities and forcing households to undertake balance sheet repairs”.

He goes on to say that if house prices start to fall and the household sector is forced to start paying down debts the government should spend more money in the form of fiscal stimulus to allow that to happen more easily.

In 2012, I attended a conference in New York where Richard Koo was the featured luncheon speaker. He issued the same warning then to the U.S. government. They did not listen, as government spending at that time was politically impossible and fiscal austerity was mandatory. The U.S. economy has recovered, but at a very slow pace.

If a balance sheet recession starts in Canada, which seems likely now that house prices are falling in some cities, will Canadian authorities listen to Richard Koo?