The North American consumer is shifting buying preferences and the retail shopping industry is feeling it. New evidence of this trend arrives almost daily with yet another retail chain store bankruptcy and related struggles for shopping mall viability.

Will this disruptive change in how people shop spell the end of traditional retail stores and malls?

In December 2015 I wrote a short piece — “The demise of the shopping mall is imminent” — and, if anything, I wasn’t pessimistic enough about the forced shrinkage in retail space and the disappearance of traditional retailers.

In the U.S. the number of retailers leaving the business would be too long to cite but we have an indication in announcements of store closures by Macy’s (63 locations) and J.C. Penney (138). Those closures will have an impact as they are often anchors for large regional shopping malls.

An article by Robin Wigglesworth in the FT suggests that it’s the online giant Amazon.com that is causing this upheaval. Amazon is an amazing company. As I wrote in December 2015 I wish that we had invested in AMZN. It has always seemed too expensive for our approach, which is based on buying out-of-favour stocks at reasonable valuation. Amazon as a stock has never met those criteria. This post from the Centre for Economic and Policy Research shows what future earnings would look like if AMZN’s current stock prices were justified.

Here’s a link to the annual letter written by Jeff Bezos.

For twenty years Jeff has talked about it always being Day 1 at Amazon. On Day 2 the company starts to go into decline, irrelevance and death. So it’s always Day 1. The commitment to innovation and pace of change is impressive.

On the other hand, the traditional retailers are in a different space, worrying about leases, downsizing, large debts coming due, store closures and excess inventory that cannot be sold, even at a discount.

The bubble in retail space is now bursting, just as the housing bubble burst in 2006-2010 in the U.S. And the shrinkage in square feet terms will be breathtaking in the U.S. and Canada. According to a presentation by General Growth Properties (GGP) the U.S. has 24 square feet of retail space per capita, compared to 16 in Canada and 11 in Australia. 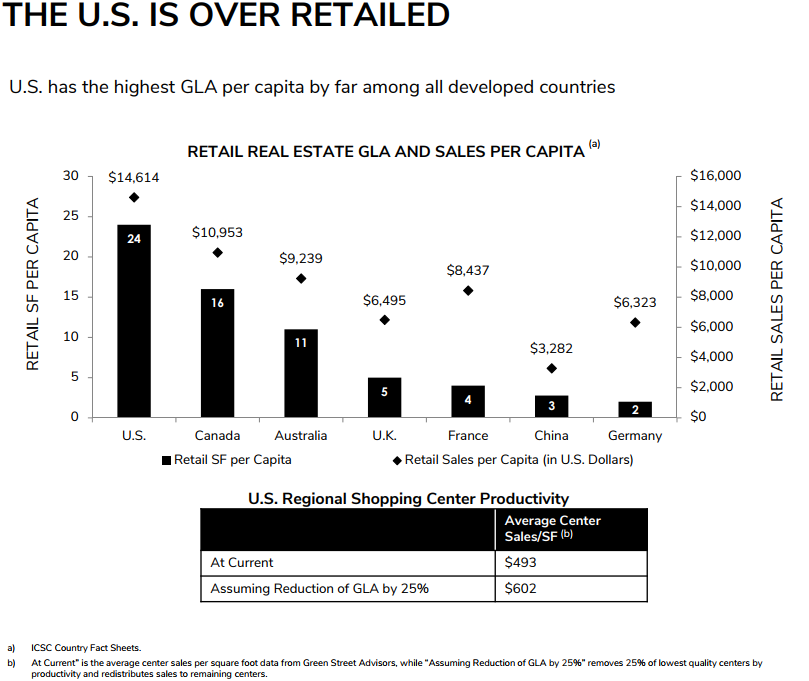 The writing is on the wall, but North American mall owners will fight back. One way they will resist the trend is by trying new things, such as “experiential retailing”; the hot “new” trend in malls. This means, among other things, adding entertainment and social events to the shopping experience.

And maybe it’s too soon to count them out. Traditional retailers still control more than 90 per cent of retail volume, according to GGP. Ecommerce has only 3.7 per cent.

But the reality is stark. Much less space will be needed and it’s hard to get retailers to shut down voluntarily. Most only do so during bankruptcy — not before.

Both GGP and another big mall owner, Simon Property Group, carry a large amount of debt, about $18 and $15 billion respectively. And their leverage ratios are very high, as they pay dividends to their shareholders rather than pay down debt.

It seems that substantial downsizing of “bricks and mortar” retail is inevitable. That process of disruption will send multiple shock waves through the retail industry, real estate prices and corporate bond markets.