The Bank of Canada finally did it

The Bank of Canada did it. Finally, after seven long years, the BOC raised rates by a ¼ point, to 0.75 percent. Banks and other lenders immediately responded by hiking mortgage rates.

A quarter point is hardly enough to send shock waves through the Canadian financial system but it could be a turning point.

In the BOC July 2017 Monetary Policy Report a case is made for continued and growing strength in the Canadian economy. And the announcement that accompanied that report clarified that absorption of excess capacity in the economy and “above-average potential growth” were the reasons for this small but significant move. But many analysts are scratching their heads over this change in direction.

“Canada’s economy has been robust, fueled by household spending.”

You guessed it — it’s a debt binge of epic proportions.

Here’s a chart from the excellent report just released by David Macdonald of the CCPA: 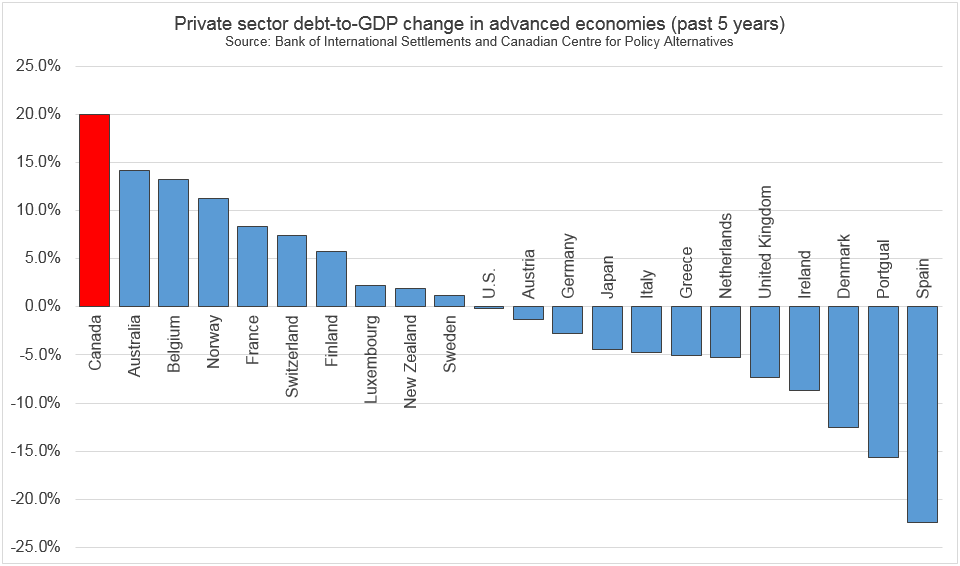 It’s clear that growing debt has pushed Canada to robust economic growth and, specifically, record housing investments. The only components of the great Canadian housing bubble that make it directly into GDP are new home construction, renovation spending and cost of selling and buying homes (mostly sales commissions).

And the cost of servicing the debt associated with housing investment can only go up with the BOC’s announcement: 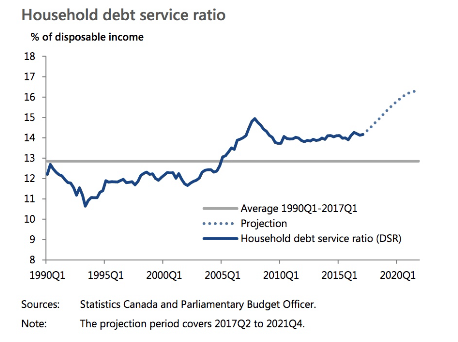 Note that the debt service ratio is already well above the long term average, EVEN AT YESTERDAY’S RECORD LOW INTEREST RATES!

So this and any further increase in rates, which are already occurring, will mean trouble for the many households that are right on the edge.

Did the BOC take this into consideration when they raised rates?

While there is little mention of household debt and housing in the press release, there are some references in the MPR:

“Consumption growth will be restrained by elevated levels of household debt and higher longer-term borrowing costs as global long-term yields are projected to gradually rise.”

“Until very recently, housing market activity had been quite strong in some regions.”

“However, a recent sharp decline in resales and moderation in starts in Toronto and surrounding areas have contributed to a slowdown in housing market activity since April. The Ontario Fair Housing Plan has likely played a role, but it is too early to assess the extent of its effect”.

“Looking ahead, residential investment is anticipated to contribute less to overall growth. Macroprudential and housing policy measures, as well as higher longer-term borrowing costs resulting from the projected gradual rise in global long-term yields, are all expected to weigh on housing expenditures.”

And, on page 8, the BOC shows their assessment of where the strength will be: 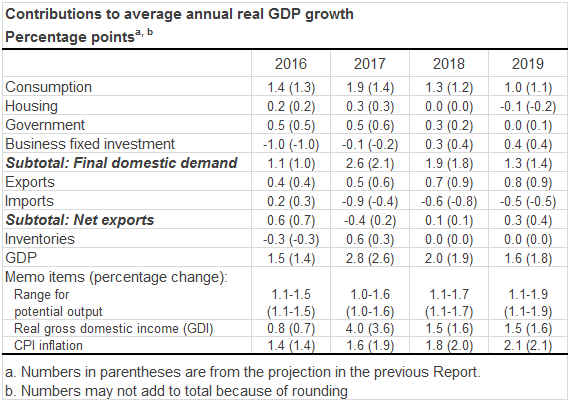 In this table housing is expected to contribute the same in 2017 and 2018 and to improve in 2019 from previous forecasts.

And all-important consumer spending is expected to contribute more than previously expected in 2017 and 2018.

One doesn’t have to be an economist to recognize that even a mild slowdown in housing expenditure (currently at 8% GDP) would have a large impact on the Canadian economy, especially in Ontario and B.C.

But for some reason they went ahead anyway. Maybe the BOC felt that rates have been too low for too long, and it’s time to bring them back into line.

And, in the press release, they gave themselves an out, if they need to reverse policy quickly:

Watch the very important Toronto housing market for signs for the impact of this interest rate hike.