Canada’s oil output is still growing, as a result of massive investments over the last two decades in Northern Alberta oil sands.

This increase in production will continue for many more years, according to some, as new plants are still being completed and expanded.

Can the United States continue to absorb all of Canada’s growing production without depressing prices?

According to an article published recently in the Financial Times of London England, Canada is a major threat to OPEC’s plan to cut back on production and push prices higher. Contact us for a copy.

Canada’s exports combined with rapidly expanding tight oil production (shale) means that the U.S. market is very well supplied, with much of the new import volume going into storage tanks. The OPEC cuts in production are not having the intended effect.

Prior to this recent surplus situation, Canada had been the biggest beneficiary of demand increases in the U.S. over the last two decades. As other suppliers such as Mexico faced shrinking demand for their product in the U.S., Canadian exporters were able to sell more and more oil into the southern U.S. refinery system which can handle the “heavy” type of oil produced in Canada.

Since the mid-1990s Canadian exports to the U.S. have trebled, allowing the producers of Northern Alberta’s oil sands to sell their bitumen product in ever increasing amounts. 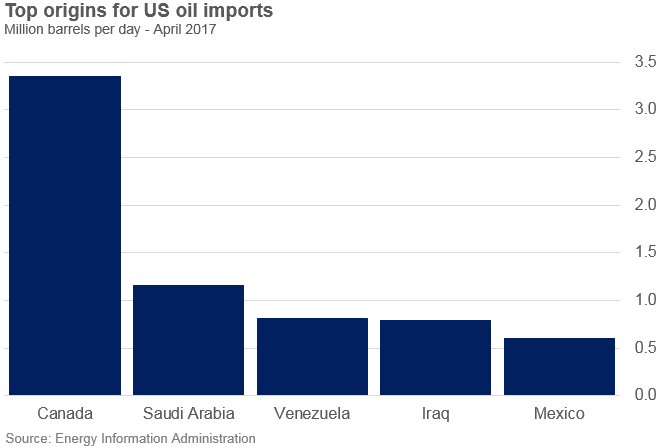 A total of 600,000 new barrels are set to hit the market in the next two years.  According to the Canadian Association of Petroleum Producers (CAPP), Canadian producers will be adding 1.3 million barrels (m bbl.) by 2030 although this forecast could be too optimistic. Unless new pipelines to the west coast are built, or existing ones like Kinder Morgan’s Trans Mountain are expanded, allowing access to new markets in Asia, all of this increased production will have to find a home in the U.S.

Making room for 600,000 new barrels soon and a further 700,000 barrels in a few years might be difficult. Domestic U.S. shale production is increasing rapidly. And even without any domestic production increase, importing 1.3 million additional barrels would mean knocking out all Saud Arabian imports, plus a bit more.

And what about demand (consumption)?

This next chart shows that consumption of petroleum has declined a bit recently.

Petroleum usage peaked at about 18 m bbl. per day, and has declined about 10 per cent from that level. About 8.7 m bbl. a day, or around one half, goes into cars and light trucks.  But forecasts by the EIA show a decline in this category:

The net effect of these fuel economy trends is that light-duty vehicle energy consumption is projected to decrease 12%, from 16.1 quadrillion British thermal units (Btu) in 2017 to 14.2 quadrillion Btu in 2025 (AEO2017 Reference case) despite projected growth in vehicle-miles traveled of 5% over the same period. Nearly all of this energy consumption is gasoline, with gasoline consumption by light-duty vehicles projected to fall from 8.7 m bbl. per day in 2017 to 7.5 m bbl. per day in 2025.

So U.S. oil demand is declining in that all-important category going from its current 8.7 m bbl. to 7.5 m bbl., in less than a decade.

Economic theory states that when demand and supply lines cross it means that prices have to change. In this case, that downward price adjustment could be painful for both OPEC and North American producers.