Australia stands alone with its massive housing bubble. Home price growth there has outpaced gains in most developed countries.

Is Australia’s housing and debt bubble likely to cause a financial crisis?

Readers will be familiar with concerns about the Canadian housing bubble and household debts — warnings from authorities seem to come every week.

But there’s another country — Australia — that has an even bigger bubble: 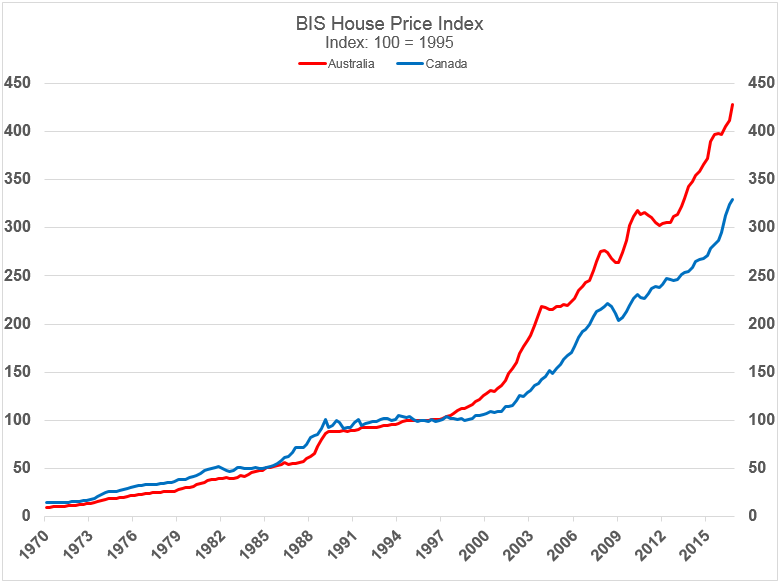 Since 1995 housing prices have quadrupled in Australia while “only” tripling in Canada.

And it’s not just house prices. The household debt that comes along with inflated house prices could be a more severe problem.

If those concerns weren’t enough, there’s another imbalance in Australia. Non-financial corporations have made themselves vulnerable by taking on too much debt, leading to worry about their ability to service that debt. 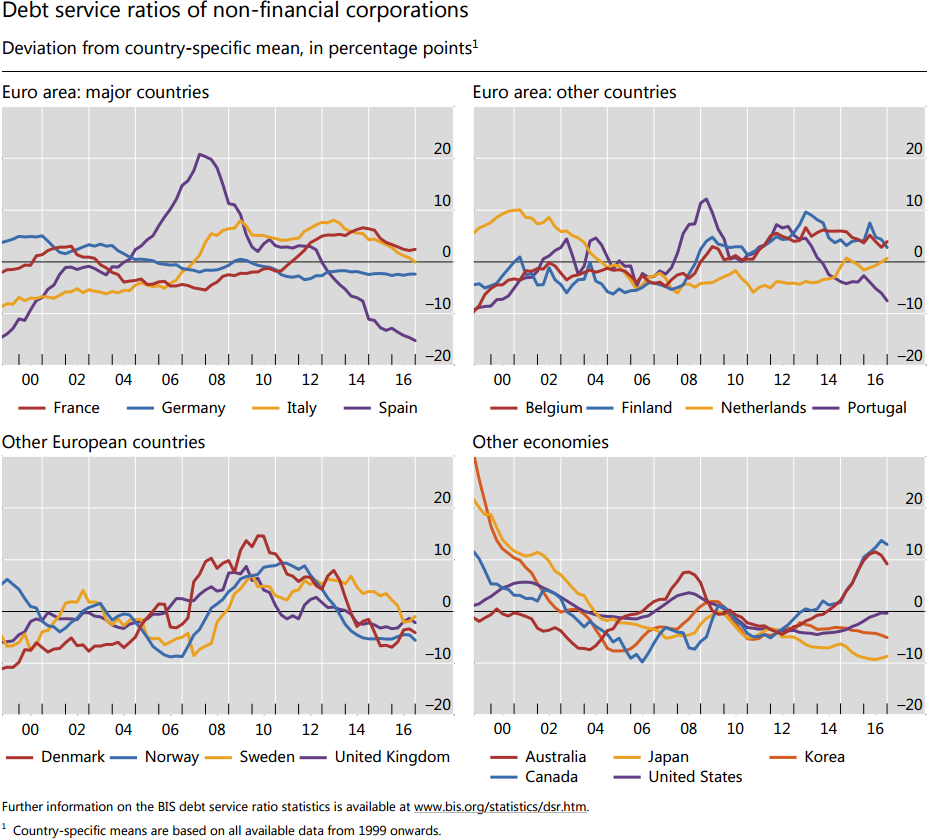 The lower right panel shows that Australian corporations are stretched in their ability to service their debts, at about 10% above their previous average. Note that Canada is keeping up in that trend too. 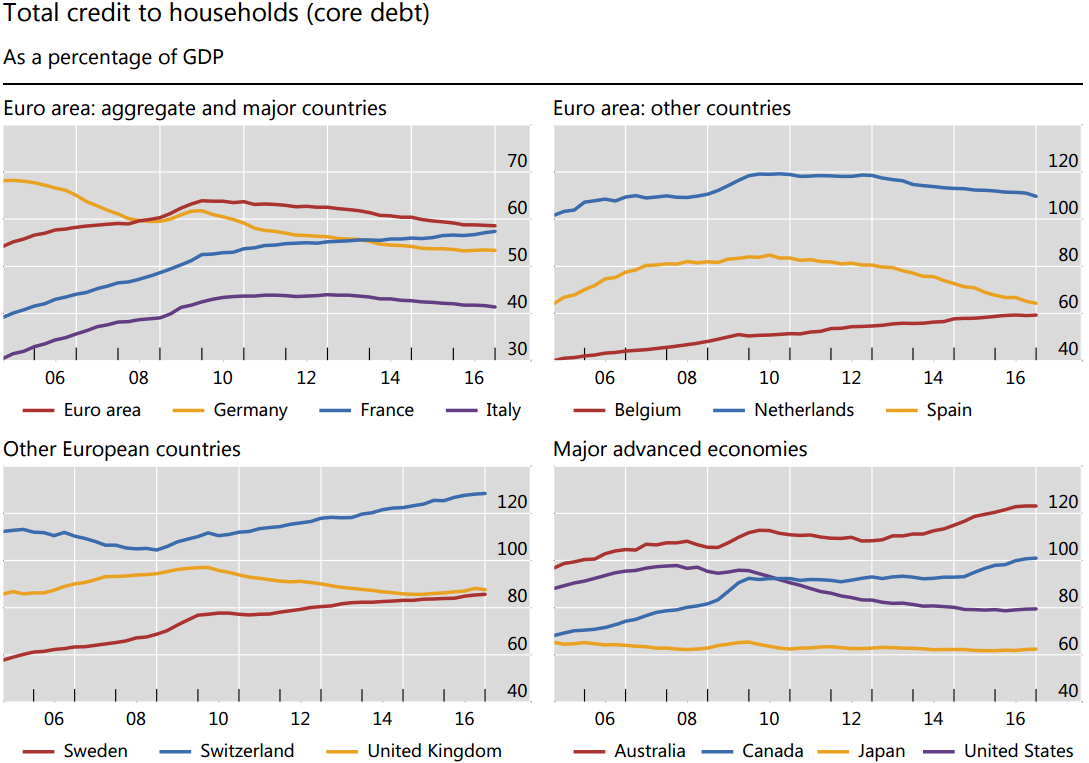 Australia pushed its economy onwards and upwards with debt, primarily to the household sector but also for the business sector. The size of total private sector debt, at 200 per cent of GDP, means that more and more credit needs to be advanced to keep GDP growth going.

Keen provides mathematical examples, confirming that a slowdown and a crisis must come. 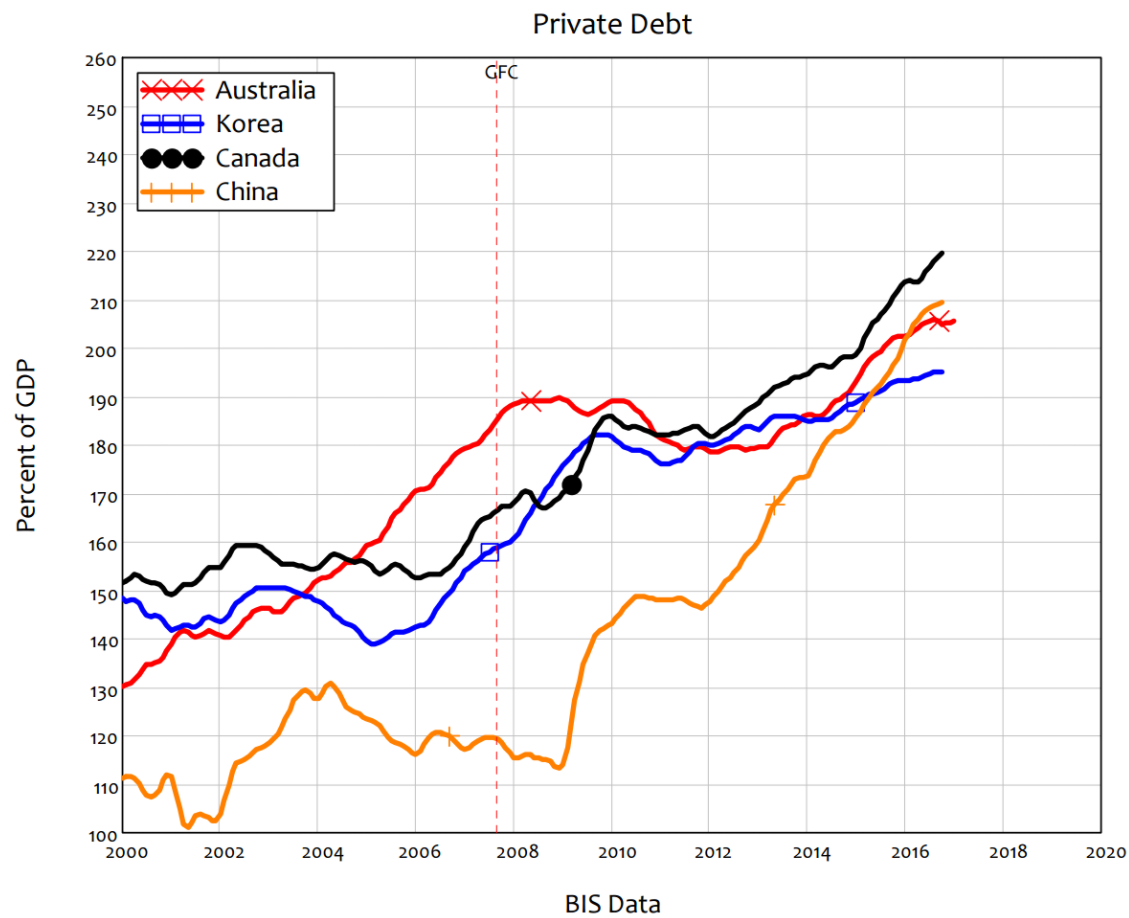 Australians and Canadians were very proud of their ability to sail through the GFC with barely a ripple on the water; a mild recession in Canada and none in Australia. But with that pride came complacency and increasing debt loads.

And that debt will be the problem. As Keen points out, the total private sector debt pile has to keep growing at ever faster rates, because interest and amortization payments increase faster than GDP. So it’s impossible to continue at this pace as servicing debt will eventually overwhelm the economy, even if we make the unrealistic assumption that interest rates never go up.

So far, the policy of debt-driven growth has worked, creating some big winners. In Australia (and Canada), as credit growth continued, the banking sector did very well.

But all good things will come to an end. As Canadian banks were in May 2017, Australian banks were downgraded in June by Moody’s:

Note that substituting “Toronto” and “Vancouver” for “Sydney” and “Melbourne” makes a perfect fit for Canada.

"The resilience of household balance sheets and, consequently, bank portfolios to a serious economic downturn has not been tested at these levels of private sector indebtedness," it said.

If credit growth turns negative the Australian economy will find it impossible to avoid a financial crisis and a severe recession.

Perhaps the 2008-09 GFC was only delayed for Australia.