Can we avoid another financial crisis?

There’s a new book, Can we Avoid Another Financial Crisis?, that reveals new insights about the 2008-09 crisis and explains why another crisis is coming and gives workable solutions to avoid that future crisis, in just 130 pages.

The author, Professor Steve Keen, describes, in easy-to-understand prose, how mainstream economics failed us before 2008. And he outlines what he thinks will happen when current unsustainable trends reach their ultimate conclusion.

For anyone who wants to know what will happen next, read more….

Keen’s previous book, Debunking Economics, shows how unrealistic assumptions and theoretical distortions have turned economics into a field of study that is unable to predict crises like the one that happened just eight years ago.

As Olivier Blanchard, former head of research at the International Monetary Fund said about the most popular models currently used by economists:

“They are based on unappealing assumptions. Not just simplifying assumptions, as any model must, but assumptions profoundly at odds with what we know about consumers and firms.”

Page 24, Keen, Can we Avoid Another Financial Crisis?

By ignoring debt, banking and the credit cycle, economists are poorly equipped to plan economic systems and run central banks. And yet, in today’s world, economists still direct much of the economic policy that governments and individuals rely upon. And those policies are not adequate to the task.

In his new book, Can we Avoid Another Financial Crisis? Keen explains why economics has lost its way and why economists’ mathematical models were unable to predict the last crisis and will fail to prevent the next. 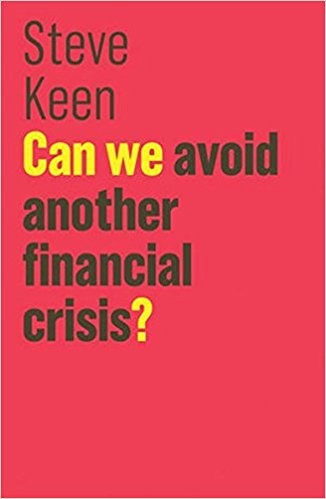 “In 2008, conventional economics led us blindfolded into the greatest economic crisis since the Great Depression. Almost a decade later, with the global economy wallowing in low growth that they can’t explain, mainstream economists are reluctantly coming to a realization that their models are useless for understanding the real world.”

Chapter 2 in my 2015 book, When the Bubble Bursts: Surviving the Canadian Real Estate Crash, refers to the explosive growth in private sector debt in Canada. This chapter outlines that rapid growth makes Canada one of the countries most vulnerable to the next financial crisis. That growth continues to this day, well above the rate of growth in the economy.  Private sector debt includes household debt and non-financial corporate sector debt and has reached 220 percent of GDP. Canada’s data from Keen and the BIS: 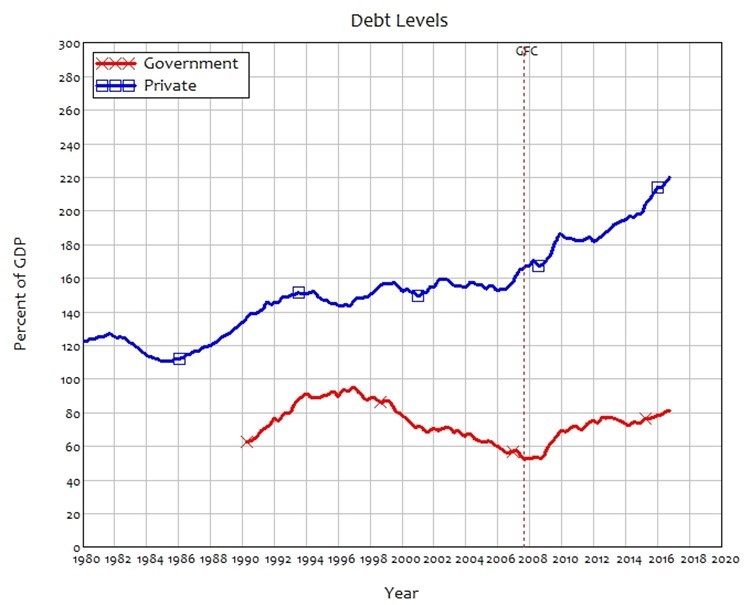 Professor Keen agrees that Canada is one of the countries with the highest risk in the next cycle. Another crisis in several countries is inevitable, he argues, unless drastic action is taken. He calls these countries “Zombies-to-Be” as their excessive debt will make them the “Walking Dead of Debt”, meaning they will be unable to grow or evolve until their debt burden is lifted.

Hyman Minsky was an American economist who died in 1996. Minsky provided theoretical background for much of Keen’s work, identifying the credit cycle as the most important factor that mainstream economists ignore. But Keen has taken Minsky’s work much further in this new book.

Keen describes how the lull before the storm was dubbed “The Great Moderation” by many leading economists. Not only did they miss the extreme risk that was looming over us, but they felt the lack of volatility in their most watched indicators meant that a permanent condition of prosperity had arrived.

Largely undaunted by their abject failure to predict and explain the Global Financial Crisis, mainstream economists are still in charge at most central banks. Their followers generate most of the research that gets published in the best journals. But, according to Keen, most of them still ignore the most important influences on the economy —the unsustainable level and growth of private sector debt, the crucial role that banks play in creating money, and the credit cycle.

I urge everyone to read this book. It’s accessible to most readers, employs a minimum of economic jargon and delivers information that will be new and shocking to most people.