Impeachment: what are the chances?

The U.S. President Donald Trump is in trouble over allegations concerning inappropriate cooperation between people in his campaign and the Russian government. Many investors have been asking if impeachment is likely and how it would affect the stock market.

Will President Trump be impeached? If he were, how would it affect markets?

At the time of this writing, May 26, 2017, there is no proof of serious wrongdoing by Trump or people close to him. But there are many stories circulating in the media that indicate potential trouble for him.

The impeachment process starts in the House of Representatives; the lower house of the U.S. government. There are 435 elected members and they all stand for re-election every two years. The next election is November 6, 2018, eighteen months hence. A simple majority of the House decides on impeachment.

Control of the House matters because impeachment is a political decision. If the elected members vote along party lines there is no chance of impeachment prior to November 2018. But if the House voted to impeach, the Senate would hold a trial and a vote on whether to remove the President, which requires 2/3 majority for removal. 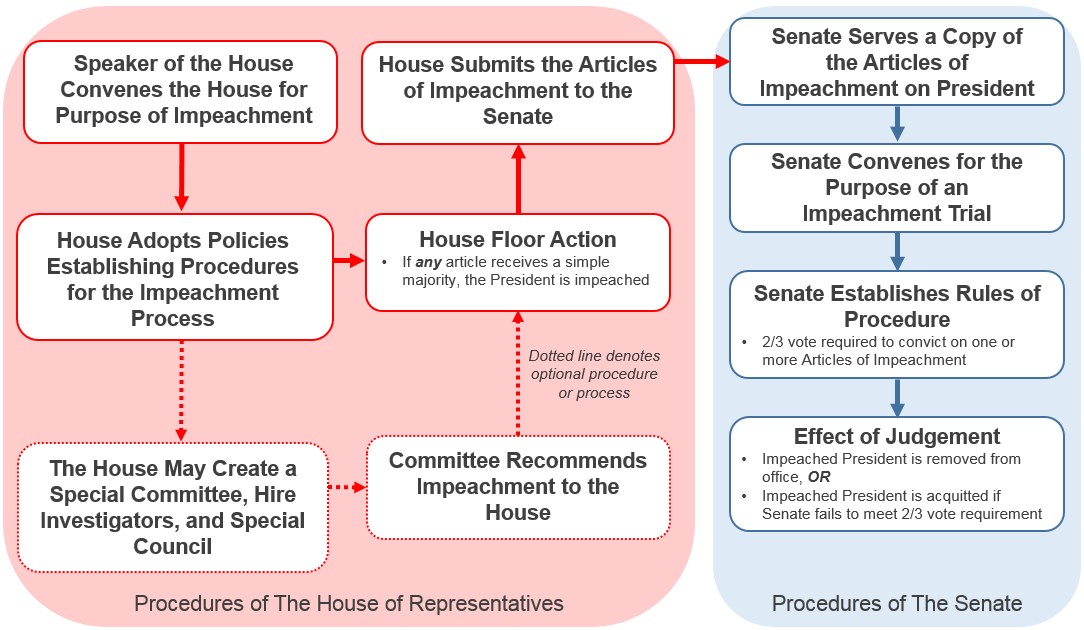 If the Senate holds a trial, it’s possible that Trump would lose, since there are Republicans like John McCain and Marco Rubio who openly oppose Trump. Trump has insulted and alienated many other Republican Senators during the campaign and after taking office. All Democrats plus about eighteen Republican Senators would have to vote for removal to reach a 2/3 majority.

If the senate voted to remove a sitting President, which has never happened before, the Vice-President, in this case Mike Pence, becomes President.

But it starts with the House, and Republicans hold a comfortable majority with 247 seats; the largest since 1929. A swing of 30 seats would be required to impeach, which is unlikely.

After the November 2018 vote the odds of impeachment go up dramatically, if the Republicans lose a large number of seats in that election. If Democrats control the House after November 2018, impeachment becomes quite likely.

“An impeachable offense is whatever a majority of the House of Representatives considers it to be at a given moment in history”.  Remarks by House Minority Leader, Gerald Ford, April 15 1970.

Could Democrats take control in 2018? Trump’s approval ratings are at record lows and there’s more than a year before the election campaign. If there are further damaging revelations, including a Watergate-style “smoking gun”, all bets are off.

When the House of Representatives decides to impeach, the House will prepare articles of impeachment or charges of wrongdoing. The threshold is very low, as the language says impeachment can be invoked for activities considered to be “Treason, Bribery, or other High Crimes and Misdemeanors”.

The last time this happened was during President Clinton’s second term, in the late 1990s, and the charges then were “obstruction of justice” and “perjury”. Clinton was acquitted by the Senate and served out his term.

The stock market actually rose during Clinton’s impeachment, as the dot-com stock market bubble was going full blast. Impeachment came near the end of that 18-year bull market; one of the best markets ever.

Before Clinton’s impeachment there was a potential impeachment that involved President Nixon. Nixon resigned in August 1974, while the impeachment articles were being prepared. So Nixon was never actually impeached but if he had been it seemed likely that he would have been removed from office. His resignation was near the end of a severe bear market that started in 1973 and bottomed soon after he resigned.

There are not enough examples of impeachment to draw any conclusions about the market reaction. But in the event that President Trump is impeached before the end of 2018, there will need to be a very serious scandal, perhaps involving treason.

In such a scenario it’s easy to imagine stock market participants getting very worried and a major sell-off would be likely, especially given that valuations are expensive.

So keep your eyes and ears open for a “smoking gun” before November 2018. After that look for a change of control in the House of Representatives that would set the stage for impeachment.  In history when one party holds the Presidency, the House and the Senate, they usually lose about thirty five seats in the mid-term elections according to economist Douglas Holtz-Eakin.

President Trump should be worried.