My first book, “Investment Traps and How to Avoid Them” (Prentice Hall 1999) discussed how much of the value of the 1999 stock market was concentrated in just a few dot-com stocks. The S&P 500 in the U.S. market included a large number of highly valued companies in one narrow sector. As it turned out that was a major “investment trap” that hurt many investors in the 2000-2002 bear market.

Is there a similar concentration problem today in the U.S. market? In the world?

The S&P 500 is the premier index for stock market investors. While many news outlets quote the Dow Jones Industrial Average or the NASDAQ, the top index for professionals is the S&P 500 or “SPY” as it is sometimes referred to, based on the symbol of the ETF.

The ETF “SPY” (SPY) trades a gargantuan number of shares every day, as day traders, pension plans, mutual funds all buy and sell for various reasons. Traders are trying to “scalp” a few basis point moves for small profits, while others are using SPY as a hedge against a stock market portfolio.  Most think that they are trading a broad index that represents wide ownership of 500 companies.

Many of these people don’t realize that there is a large amount of concentration inherent in that trading vehicle. Because the S&P 500 is weighted by capitalization, the largest companies by market cap make up most of the value and exert most of the influence on the changes in daily value.

Market Watch contributor Rob Isbotts wrote recently that 50 percent of the value of the SPY was in only 50 stocks.  He also noted that only three companies, Microsoft, Apple and Alphabet (Google) make up 10 percent of the total value of that group of 501 companies. (The S&P 500 actually has 501 stocks at this time).

The late 1990s wasn’t the first time that a few stocks led the market. This happened also in the 1960s, with the “one-decision” stocks like Xerox which made up the so-called Nifty Fifty. With all of the market’s money in just a few stocks, the inevitable bear market was a disaster. By concentrating on the Nifty Fifty, Gerry Tsai’s Manhattan Fund, lost 73 percent of its value from 1969 to 1974, in a market that declined just 25 percent.

It’s important to notice that all the S&P 500 stocks are U.S. companies. The world is much bigger than the U.S., which represents only 5 percent of the world’s population and about 20 percent of economic activity. But the U.S. stock market makes up 53 percent of the total value of all equities in the world. This could a considered an unusually narrow concentration also.

The world wasn’t always so concentrated.

At one time U.S. stock markets made up only 15 percent of the world’s value, followed closely by Germany at 13 percent and France at 11 percent. UK stocks were almost double the US share at 25 percent! 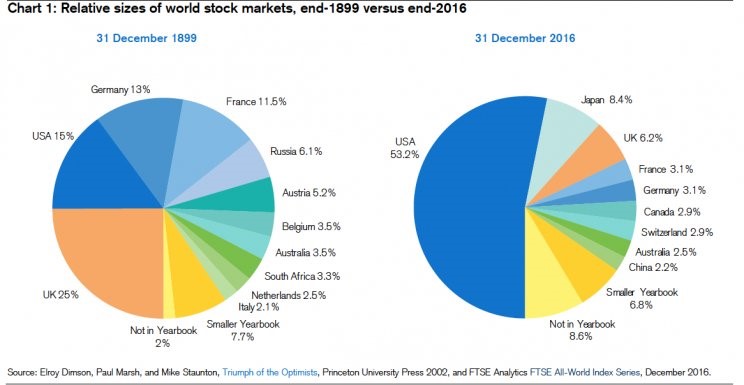 It is possible that we are seeing a rerun of the 1960s and the late 1990s when a concentration of outperforming stocks forced professional investors to place more and more dollars in a small number of stocks. With the added pressure of the recent ETF fad where purchases automatically direct most of the money into a small number of very large companies, it’s easy to imagine that we’ve reached a danger point.

The solution is simple. Diversify outside of the top five or ten companies in the SPY and diversify outside of the U.S. There are many great companies in the world and in different sectors. In our investment portfolios we own 20-25 companies, diversified in at least seven sectors and representing a global footprint. Our most recent purchase was a Japan-based maker of robots and factory automation.

After all, it’s a safe bet that even twenty years from now the allocation between the U.S. and the rest of the world will be will be much less lop-sided.