The torrent of news regarding residential real estate in Canada and related matters such as mortgage financing and the instability of at least one lender accelerated last week.

The uproar around the news that Canada’s largest alternative lender had to seek emergency funding meant that almost everyone involved ignored the release of CMHC’s quarterly assessment of the risks facing the housing market.

There are some interesting tidbits in the report. And I would like to suggest a new category to their proprietary risk assessment ranking, borrowed from comments about the U.S. housing bubble of a decade ago.

The report from Canada’s government-owned housing insurance agency, CMHC, assesses the degree of risk and overheating in the housing market.

It’s interesting to note that the CMHC ignores financing conditions in their four-factor rating system, as the CMHC is on the hook for payments on mortgages that default for about 40 percent of the value of Canadian residential mortgages. The total value of mortgages outstanding is about $1.4 trillion.

The four factors used to assess the risk are:

The specific markets that qualify for the red ranking — strong evidence of problematic conditions — are Victoria, Vancouver, Saskatoon, Hamilton and Toronto.

Anyone following the housing market closely would be nodding their heads over four of these. But Saskatoon? That’s a headscratcher.

Saskatoon qualifies for red because of a decline in real disposable income and evidence of overbuilding. As well, the report mentions that rental vacancies are about 10 percent, well above the threshold for trouble in that category which is 7.1 percent.

On the other hand, Edmonton and Calgary are ranked at yellow — moderate evidence of problematic conditions.

The problems in Vancouver and Toronto continue and that’s why the red ranking applies to those cities and Canada overall.  Issues cited are:

For Toronto the report also mentions that there isn’t sufficient income growth and population growth to justify the price increases. 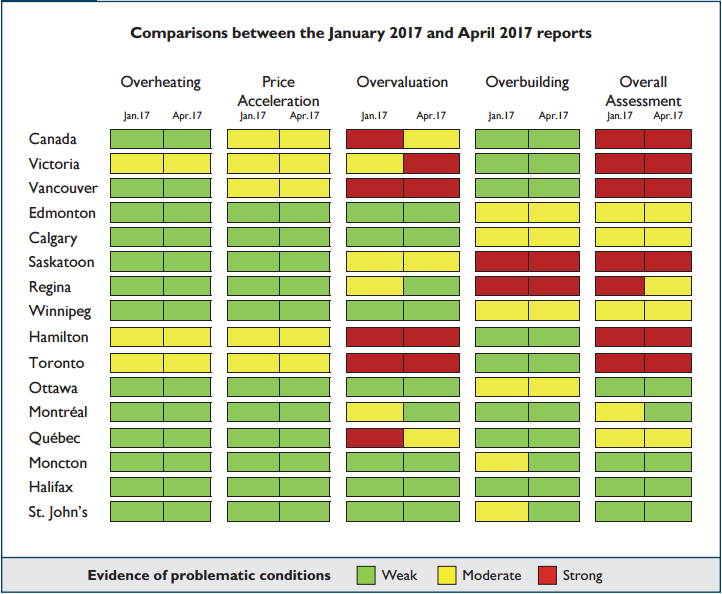 As far as it goes this report is useful reading.

But where’s the assessment of the impact of the changes to the rules for mortgage qualifications and availability of insurance? The rules were tightened quite dramatically by the very same CMHC that puts out this report. But there is no mention of the potential impact of the rule changes on availability of mortgage financing and house prices. And what about the extreme levels of unaffordable house prices in the two most overheated Canadian markets?

As author of The Big Short Michael Lewis said:

So the CMHC could use the simpler factor of the median house price to income ratio instead.

The median house price to median household income level in Canada and in each of the Canadian cities is easily measured.  The CMHC would find that those ratios in Toronto and Vancouver far surpass the extreme levels in the U.S. at the peak, which was between 4.0 and 4.5. At the nadir of the correction in 2010 that ratio dropped to below three times.

The current level in Toronto for single family homes would be more than 10 times, while Vancouver has been above 10 times for several years. Those levels for unaffordability are more extreme than Miami and Los Angeles before those markets crashed.

To use the colourful language of the author of The Big Short that’s the very definition of insanity. So I propose that we call the housing conditions in those two markets — insane.

What colour could be used for this new proposed category for extremely problematic conditions? I’d welcome any suggestions.