This week the Ontario, Toronto and Canadian governments met to decide how to “fix” the real estate market in Toronto and Greater Golden Horseshoe in southern Ontario.

And on Thursday, Ontario’s Minister of Finance announced 16 new measures that are designed to reign in out-of-control housing markets in his province.

Are these measures enough to make housing affordable again?

Ontario’s Fair Housing Plan, targeted primarily at the Greater Toronto Area (GTA), takes a run at solving a very difficult problem. How does a government reign in speculators without causing a real estate crash?

Similar to what the B.C. government announced for Vancouver last summer Ontario is targeting foreign buyers, with a myriad of exemptions. Also in 2017 the federal government announced that the principal residence exemption from capital gains tax that applies to owner-occupied homes will still be available but all sellers of properties will have to register that sale with the CRA, even if they qualify for an exemption. This measure may put a damper on speculators, domestic and foreign, that wish to fly “under the radar”. Reporting to government about their investment activities will push them away, perhaps.

To take that even further, this Ontario announcement mentions cooperation between Ontario and Ottawa:

Partnering with the Canada Revenue Agency to explore more comprehensive reporting requirements so that correct federal and provincial taxes, including income and sales taxes, are paid on purchases and sales of real estate in Ontario.

I expect that this cooperative approach between jurisdictions will eventually be applied to all Canadian real estate transactions.

Since the data are so scarce, we don’t know exactly how many real estate buyers are speculating or investing, how many transactions are done by foreigners and how much of the activity might be due to money-laundering. But there is enough evidence uncovered by investigative reporters like Kathy Tomlinson — @KathyTGlobe — and Sam Cooper at Vancouver Sun that now we know there’s some substance behind the rumours about offshore money using Canadian real estate as a place to park money.

Others have noticed too. Canada has been singled out as jurisdiction that is too lenient on money-laundering by Transparency International.

Along with the United States, Australia and the United Kingdom, the report concludes that Canada needs to do more to stop money launderers who use real estate to park illegally obtained or tainted money.

“One glaring problem is a lack of rules requiring that the actual owner (or “beneficial owner”) of a property be identified. In Canada “there are no requirements for any person involved in real estate closings to identify the beneficial owner,” the TI report stated.”

Ontario’s announced rules target speculators who are flipping or scalping condos, especially in the pre-construction market, by trading assignment sales. As well there are measures making it difficult for speculators to sit on vacant properties, which encourage them to rent out the units.

Most of the media attention will be concentrated on the 15 percent Non-Resident tax, but my guess is that the anti-speculation and anti-tax avoidance measures might have the biggest impact.

A rapid increase in the number of people owning multiple properties was mentioned. Data shows how the number of such people has increased four-fold since 2000. Since most landlords are losing money on rentals purchased at recent prices, these people are likely to be speculators. 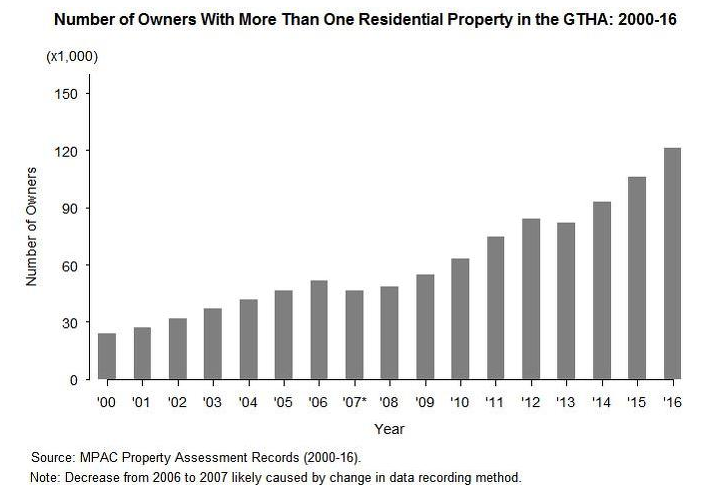 The cumulative effect of these changes in Ontario, along with the federal government’s changes to CMHC and CRA rules last year and the taxes targeting the Vancouver market will have a substantial impact.

It will take some time to see if this marks the end of the housing bubble, or just the beginning of the end.