Prime Minister Theresa May wrote a letter March 29 2017 to Donald Tusk, President of the European Council, to trigger the process of negotiations for the United Kingdom to exit the European Union.

Europe’s immediate response indicated that discussions could be contentious.

Did the Prime Minister make a mistake in deciding to revoke membership in the European Union?

The United Kingdom honoured last June’s referendum result — 36 percent of eligible voters voted to Leave — and triggered the start of the process of leaving the European Union (EU). The rules regarding exit provide for a two-year negotiation culminating in ratification votes with a majority of 60 percent of the remaining 27 members to pass as well as the European Parliament. If accomplished this would end more than 44 years EU membership. The UK is the first state to request an exit. 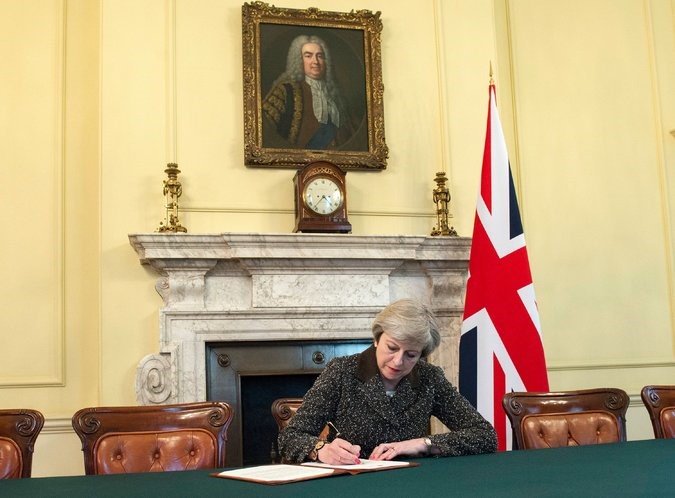 PM Theresa May stated in her six-page letter of March 29 that the UK would like to stay in a relationship, calling it a “deep and special partnership” and promoting the idea of the UK as Europe’s “closest friend and neighbour”.

The Prime Minister’s letter goes on to express the desire to negotiate a new trading partnership at the same time as the withdrawal terms are agreed. This seems unrealistic, as the Europeans are not likely to be in a generous mood to grant a new deal. The Prime Minister in the letter also attempts to dictate the terms of the negotiation and put limits on the new partnership.

Manfred Weber, a German politician in the European Parliament (EP), tweeted this: "EU has done everything to keep the British. From now on, only the interests of the remaining 440 million Europeans count for us".

As well as Europe’s possible hard line in the negotiations, there are major financial implications. To pick just one, there’s the exit bill of between 24 and 72 billion Euros to be paid by the UK as its share of remaining EU obligations.

“The effect on overall growth of falling sterling is likely to be negative.

The BoE expects the negative effect of falling sterling on household spending to be compensated by positive effects on business investment and net exports. Our analysis suggests that this is unlikely. As a result, we expect growth to slow down from 1.8%y/y in 2016 to 1.4%y/y in 2017, which should tone down the recent hawkish rhetoric of the BoE and keep it on hold throughout 2017. “

The report goes on to say that effect on domestic business is negative as those firms don’t benefit from the potential competitiveness boost from the falling pound. But they do feel the impact of higher inflation on import input prices.

Other analysts have expressed similar views, citing the importance of the financial sector to the London economy. A departure of large numbers of highly paid financial executives to Frankfurt and Paris seems likely.

As I wrote last June the United Kingdom might have been wiser to delay their decision by calling an election.

Holding an election would allow politicians and voters to discuss this momentous decision. The results of the election would help to make a final determination on the Brexit question.

But the Prime Minister may chose a different route. Only time will tell if her decision to proceed was a serious error.