The rapid growth of debt in China

The current period of rapid growth in China’s debt burden will end at some point. Some analysts believe that China will be in crisis in 2017 while others maintain that China can continue to borrow more indefinitely.

Let’s take an up-to-date look at exactly how big China’s mountain of debt is.

Here’s the private sector portion of the debt, one of the largest in relation to GDP of any country. Canada’s debt load on the private sector is similar at 200 percent of GDP, except that the split in Canada is divided equally between household and corporate. China is weighted more toward the corporate side. 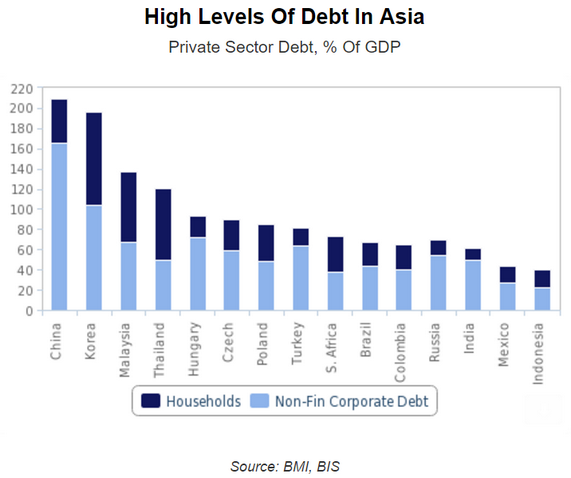 As we learned from Richard Vague in The Next Economic Disaster private sector debt is much more important in predicting a financial crisis than government debt. Two metrics make good predictors of a coming crisis — the absolute level of debt being greater than 150% of GDP and the pace of growth in the ratio of debt to GDP. Vague contends that a growth rate exceeding 18 percentage points in that ratio in five years is the trigger for a crisis. Those two conditions are easily met in China today, as they were in Canada and Australia recently also. 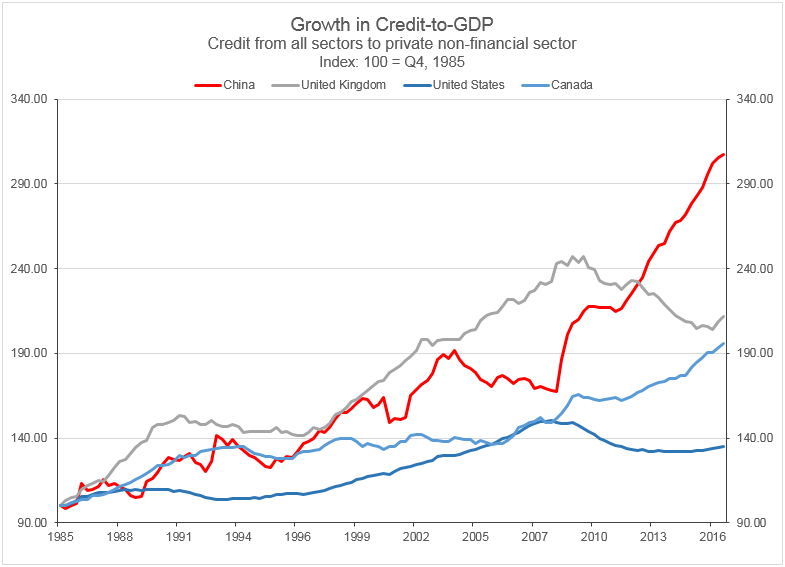 As we discussed in the March 10, 2017 Weekend Note, China and Canada were singled out by the Bank for International Settlements as two of the worst offenders in the debt growth category.

Economist Edward Hyman from ISI Evercore Partners was interviewed on March 28, 2017 by Bloomberg.  He said, “China’s a mess and at some point it’s going to blow up. They have a ton of debt, which is unsustainable.”

According to BCA Research Inc, the Chinese authorities have periodically tried to slow down the growth rate of debt. But there hasn’t been any sustained attempt since January 2009.

During those periods of tightening prior to 2009 the economy would slow and the all-important residential real estate market would weaken, leading to widespread concern. Government officials would then reverse course, pumping money into the economy through the banks and expanding the rate of growth of debt in an attempt to reinvigorate the growth in the economy. Each time they did this the debt ballooned and the growth rate slowed.

One bright spot is the fact China’s government debt load is still manageable. But that will only remain true if the government doesn’t have to bail out the banking system and large state-owned enterprises.

BCA Emerging Markets Strategist Arthur Budaghyan contends that something will happen to burst the bubble, although he doesn’t give a forecast for when. He points to bank lending as a major problem:

The PBOC Has Begun Targeting Rates in Recent Years 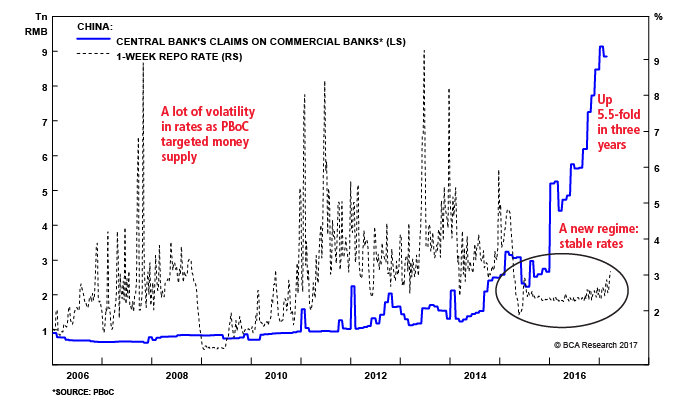 The central bankers have kept interest rates low, while allowing the bank loans outstanding to expand at rates seldom seen elsewhere. And he points out that such rapid increases in bank loans are going to be a problem.

“I do not believe even the most sophisticated financial/credit systems can allocate such amounts of credit in such a short time and not misallocate capital. By capital misallocation, I am implying investments in projects that do not generate sufficient cash flow to service debt.”

Arthur says that we should watch for interest rates and inflation as signs of an impending crisis. If inflation hits 3 percent, interest rates will have to rise and rapid debt growth will come to an end.

Let’s give the last word to an American economist who is famous for saying:

He’s less well known as the father of Ben Stein, the actor and author.