Give yourself a bonus and defer CPP

Many Canadians know that they receive a discount or bonus if they choose to receive Canada Pension Plan (CPP) payments either before or after age 65.   But Canadians often aren’t aware how significant the discount or bonus can be and what other factors may influence this decision.

In some cases taking early CPP may make sense but given rule changes and rising life expectancy it can often be a better choice to defer CPP.

Canada Pension Plan is subject to a few common misconceptions so an overview of the program is a good starting point.  CPP is a contribution-based public retirement income plan and is not a form of government subsidy to individuals.  So it follows that CPP is not income-tested but is instead a pension based on amount contributed, number of years contributed and the age you apply to receive income.

Another misconception has been that “CPP may not be there when I retire”.  This statement may be based on outdated information or may borrow from fears about the massive unfunded liability that faces U.S. Social Security.  Unlike Social Security, CPP has been updated to reflect changing demographics with perhaps the most important changes coming in 1998 when contributions were increased significantly and the Canada Pension Plan Investment Board was established to invest funds which were not immediately needed.  In 2007, Canada’s chief actuary indicated that CPP is judged to be “financially sound over a 75-year period.”

In reviewing CPP eligibility many are also surprised to learn that you need to have worked and contributed the maximum amount for 39 years to be eligible for the maximum annual pension.  For those whose career got started late, took a break to a raise a family or who retire early this is a tough number to achieve.

To defer or not defer

It is important to note that after a review in 2009 the rules for early and deferred CPP were changed with the new rules fully implemented as of 2016.  In addition to eliminating the requirement that you have to stop working to collect CPP the rules were also changed to reflect both a bigger discount for early CPP and an even bigger bonus for delaying payments.

Calculating the benefit of taking early or deferred CPP payments is relatively easy under the new and old rules.  The graph below illustrates these amounts while assuming eligibility for the maximum 2016 CPP monthly pension of $1,092.50 – according to benefitscanada.ca. The chart also illustrates the breakeven ages, or ages at which you are indifferent between the choices.  Note for each set of rules we have shown a breakeven age for:

The graph on the right shows that those who defer CPP and live past age 81 are financially better off.

For the purposes of illustration we have used ages 60, 65, and 70 but in practice you can elect any age in between 60 and 70.  Contrasting the alternatives shows a significant advantage in favour of deferring under the new rules (as indicated by falling breakeven ages).

The annual pension under the old rules at age 70 was 86% higher than the pension taken at age 60.  The new rules increase the advantage such that payments are 122% higher at age 70 than age 60.

Of course, there are other factors that should always be considered:

Frederick Vettesse, in a recent Globe & Mail article, states that Canadians are reluctant to draw CPP early because it forces then to dip into other savings sooner.  This is not surprising given past research showing that drawing on savings is more stressful than spending pension income but it doesn’t change the fact that deferring CPP is often the superior choice.    The Globe & Mail article examined the deferral dilemma with a scenario (graph below) in which one spouse dies at age 68 (Carl) and the other lives until age 95 (Hanna) and despite dipping into savings earlier the CPP deferral scenario still delivered better results.  For full details of this scenario the article can be found here. 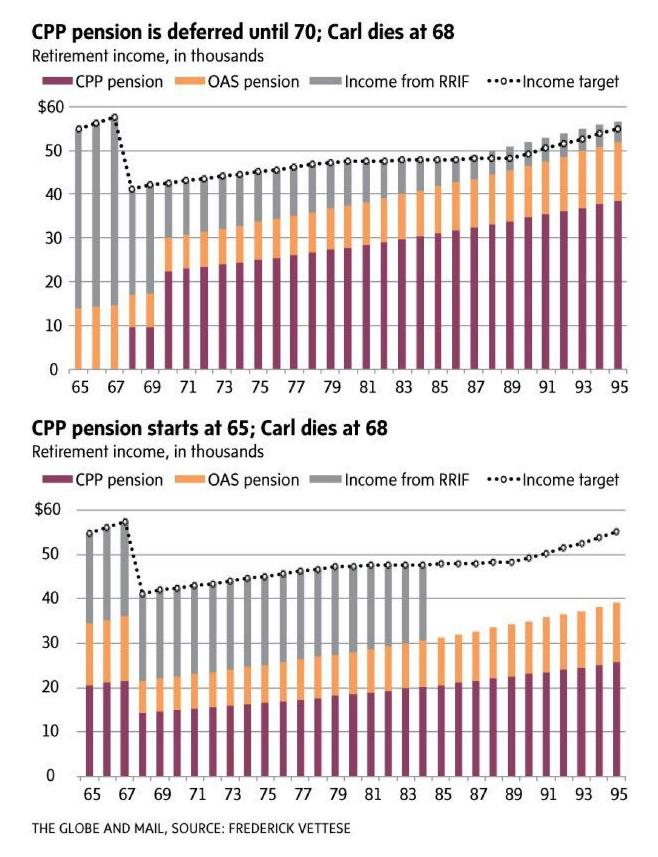 Source: The Globe and Mail

Although Canadians have been resistant to the concept of deferring CPP it deserves renewed consideration.  Changes to the CPP program have increased the deferral bonus making this an offer too good to pass up for those with the ability to wait until age 70.