Canada gets another warning

The Bank for International Settlements singled out Canada, along with China, as a country with a banking system at risk of “serious financial strains” based on their concern about excessively rapid debt growth and house price gains.

Will these oft-repeated warnings of financial stress ever come true? What is a good indicator to watch for signs of strain?

The summary of the report raised multiple red flags over rapidly increasing debt and house prices in several countries. Canada made the top of the list as the only country of 20 to trigger an early warning on three out of four metrics. These metrics were chosen by the BIS for their value as predictors of financial crises and banking stress.

The first red flag is the “credit-to-GDP” gap and Canada is second only to China on this measure. Here’s the BIS on ability to repay:

“The last two columns of Table 1 present two alternative measures of debt service ratios, which aim to capture aggregate principal and interest payments in relation to income for the total private non-financial sector. For most countries, debt service ratios stand at manageable levels under the assumption of no change in interest rates (third column). Under more stressed conditions – a 250 basis point increase in rates – and assuming 100% pass-through, the numbers point to potential risks in Canada, China and Turkey (fourth column).”

“In the past, two thirds of all readings above this threshold were followed by serious banking strains in the subsequent three years.”

It is noteworthy that there are five countries with one warning, one country (China) with two warnings and only one country with three — Canada. Canada was also singled out in the March 2016 report.

As well, the statistical annex to the report shows that Canada’s total credit to the non-financial sector (core debt) is soaring: 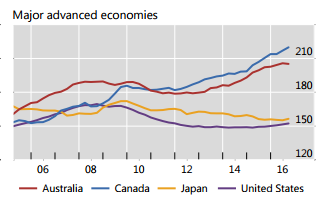 Canada stands out among peers in its appetite for adding new debt, not just to households but also to the corporate sector. While government debt gets cited often as a problem by pundits, the more dangerous debt is in the private sector, where Canada is increasing its lead at the head of this group of four.

Excessive credit-to-GDP growth compared to trend is considered dangerous because it indicates a deteriorating ability to repay debts. When debt in the private sector is growing faster than the economy, future income could be insufficient to repay borrowings plus interest.

If loans cannot be repaid, banks (and consumers) get into trouble, increasing strains on the Canadian financial system and weakening the economy.

One indicator to watch is the US/Canadian dollar cross. The USCAD was trading at about 1.3409 on Wednesday. If it moves higher, which means the Canadian dollar is weaker, this would be a signal that strains are starting to appear. 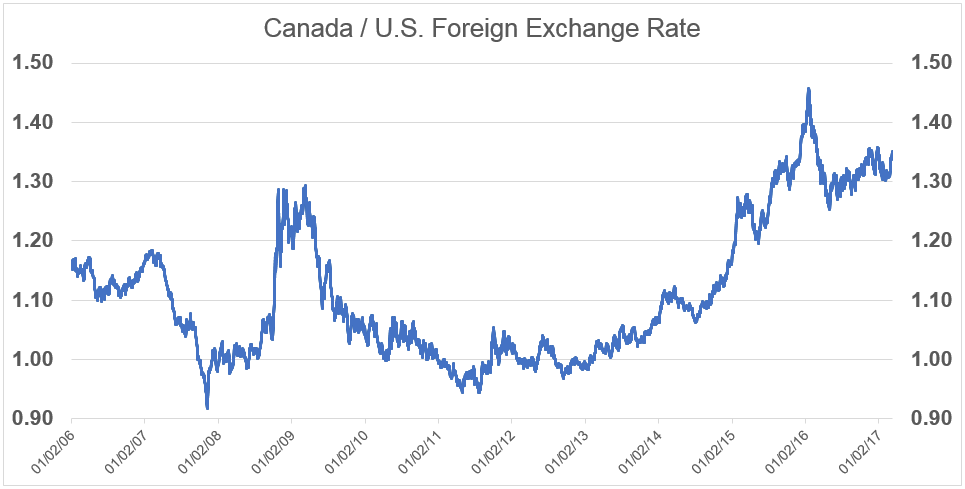 Going through the 1.46 level (the decade high), equivalent to 68.49 cents on the more popular “tourist” basis, could be an indicator of serious stress.