Paul Schmelzing of Harvard University, and currently a visiting scholar at the Bank of England, has studied the history of bond markets throughout history.

Recently he wrote that:

“Looking back over eight centuries of data, I find that the 2016 bull market was indeed one of the largest ever recorded.”

Often after a major bull market there can be a violent trend reversal, which in this case would mean much higher interest rates. Is there a sell-off in the bond market just over the horizon?

This scholar’s analysis of bond markets going back to 1285 shows that the “risk-free” interest rate reached its lowest level of the 800-year history in 2016. 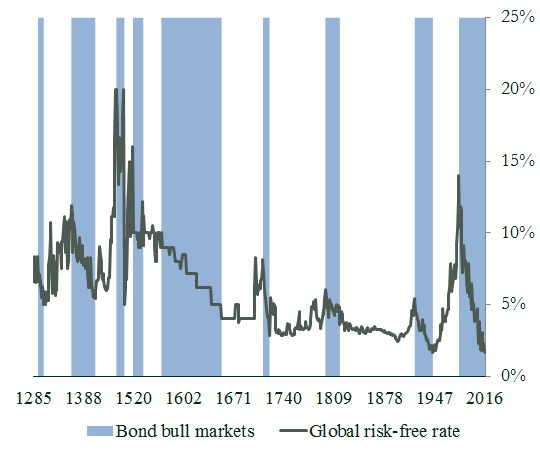 The current bull market in bonds, lasting 36 years, is the second best ever, with the bond market of 1441-82 still in front. 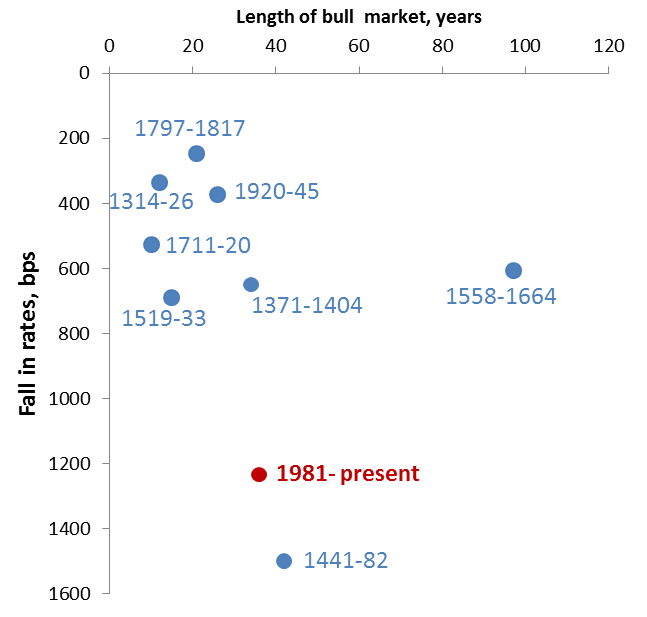 The inflation rate will be the main factor determining the path of rates in the future. The decline in the inflation rate over the last 40 years has been a substantial boost to bond prices, allowing interest rates to reach extremely low levels. The bull market in bonds started in 1981 and has been one of the most substantial ever, as it started from the highest rates ever recorded in modern times. Rates declined by about 12 percent, from roughly 14 percent to below 2 percent. The all-time low interest rate on the 10-year U.S. government bond was reached in early July, 2016 at about 1.36 percent.

What is the probability that the 10-year yield goes higher from here?

Since July’s low in the 10-year bond yield rates have been rising, hitting about 2.50 percent recently. So already this move could considered a bear market. But some experts are not convinced yet.

Bill Gross, formerly of PIMCO and now at Janus, starts his most recent letter with a poem about giraffes and hyenas in Africa. Gross believes that people should be skeptical about yields starting a long, upward climb. He points out that the Fed is now tightening monetary policy, but other central banks are still promoting easy money.

But he goes on to say that if the yield on the 10-year bond goes higher than 2.60 percent then a bear market has begun.

Other experts are saying that rates could go even lower than last July’s record.

The king of the bond bull market could be economist A. Gary Shilling who called the start of the bond bull market in the early 1980s near the peak yield for 30-year U.S. bonds of 15.2 percent. He bought the stripped coupon version of the long bond, getting the most leverage to declining rates. He went even further by selling that bond each year to purchase a new 30-year bond to maximize his exposure to declining rates. To his credit he has maintained his stance on declining yields ever since. His thesis revolves around the fact that deflationary influences are strong and the deleveraging process that started in the U.S. after the Global Financial Crisis has further to go.

Shilling’s latest comments from his January 2017 newsletter (subscribers only):

“Trump’s plans to cut taxes and hype infrastructure and defense spending would probably more than double the federal deficit from the current 3.1% of GDP. Treasury yields have leaped in anticipation … but the jumps are probably vastly overdone.”

Shilling also restated his long-standing forecast of a low of 1 percent in the benchmark yield, which means that today’s 2.40 percent level is a tremendous buying opportunity, if he’s correct.

The inflation outlook in the US is uncertain. However, with US unemployment at historical lows and average hourly earnings starting to gain, positive growth in the US could bring about price growth – with PriceWaterhouseCoopers, an accounting firm, calling for a rate of 2.4% in 2018. Some of the new U.S. President’s policies are likely to push inflation higher. But there is no way to know how much success the soon-to-be President will have in pushing his agenda through Congress. Certainly a trade war with Mexico and China would have an inflationary impact on the cost of goods in the U.S.

So we don’t know if inflation and interest rates will soar from here, or go even lower. But the 36-year bull market in bonds will end at some time, if it hasn’t already.

It would be better to be prepared for that turning point a little early than to be caught by surprise, because higher interest rates will mean significant challenges for many investors, especially consumers with excessive debt burdens.