The Federal Reserve hiked and Canada will wince

The hypothetical question I’ve been asked most frequently in dozens of interviews is about the impact of rising rates on house prices.  This week the Federal Reserve raised their target rate again, for only the second time in many years. And interest rates on bonds and mortgages are already substantially higher than levels seen a short time ago.

What will be the impact on Canada’s economy and housing from the push to higher interest rates?

The context of the interviewer’s favourite question is usually that rising rates would be one of the greatest risks to the continuation of the extraordinary house price gains of the last sixteen years. Now that rising rates have arrived, their impact on housing and the economy will be tested.

Since Canada is deemed to be tied at the hip to U.S. interest rates, it is worth our time to look at the Fed’s actions of this week.

From the Press Release from the Federal Reserve Board of Governors:

The Fed seems comfortable with the inflation rate at this time, even though Core CPI is above 2 percent, the Fed’s stated target. The Fed recognizes the elevated inflation risk:

"Market-based measures of inflation compensation have moved up considerably."

The Fed uses a different inflation measure, called the PCE or the “annual change in the price index for the personal consumption expenditure”. This measure, at 1.74 percent, is below their 2 percent target. 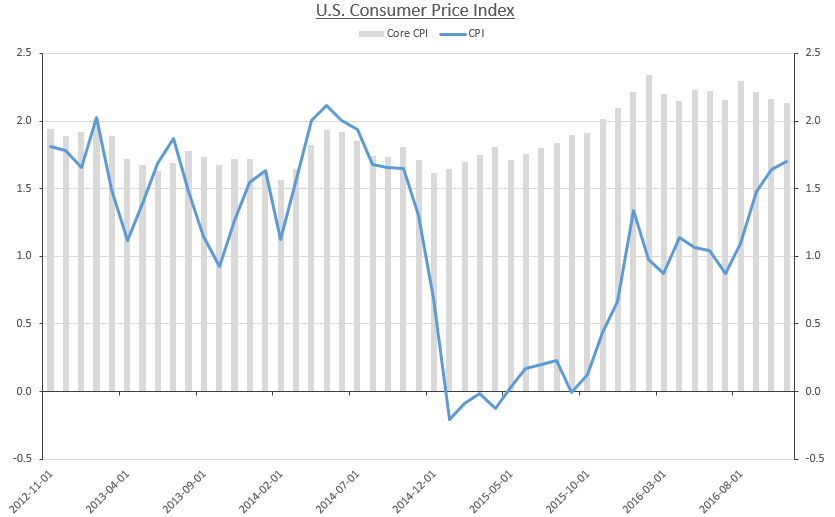 Perhaps this chart of inflation using the more popular CPI and Core CPI is what the market is watching while the Fed stays calm. Core CPI has been increasing since 2014 and has been above 2 percent for more than a year. Core CPI removes goods like food and energy which are prone to wider price changes from the consumer price index ‘basket of goods’. It is a more accurate measure of long-term inflation.

In spite of the Federal Reserve’s restraint, yields on mortgages and bonds have moved, in a “bigly” way.

Yes, bigly is a word.

Rates on ten-year government of Canada bonds were about 1 percent in Canada just a few weeks ago.  On December 9 as shown the Canada 10-yr was at 1.71. Last night, after the hikes, those same rates finished at 1.84 percent, for an increase of 84 percent!

Selected rates from December 9 and the 52-week range: 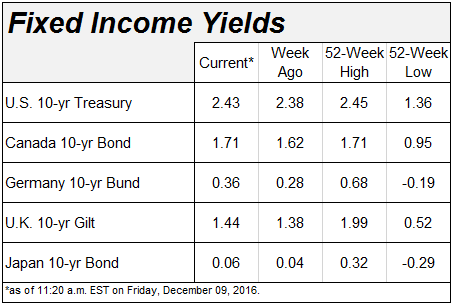 Rates around the world have soared even prior to the Fed’s 0.25 increase. It seems that something was driving rates higher before the Fed’s rate hike.

The 5-year Government of Canada bond bottomed below 0.50 percent and now yields 1.22 percent.

Are these substantial interest rate increases going to bite?

Until now, there has been nearly universal acceptance that an increase in interest rates could be the catalyst to burst the Canadian housing bubble. 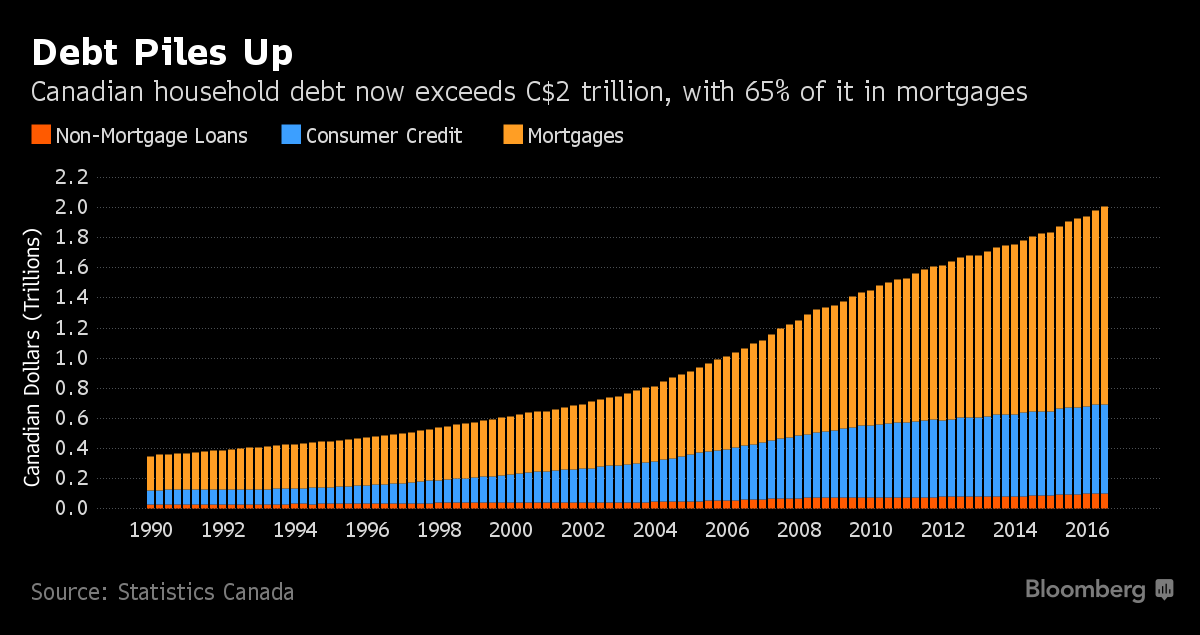 This chart shows the growth in mortgage debt from 2000, from about $400 billion, to today’s level of $1.3 trillion — more than triple, matching the rise in home prices in many major cities.

With Canadian household debt at record levels, higher rates matter. When home buyers try to buy a house for the first time, when baby boomers refinance to support their offspring to buy a house, when mortgages come up for renewal at higher rates — everyone will feel the impact. Consumer spending will be affected as people find more of their money goes to interest on mortgage payments and car loans and less is available for a vacation, restaurant outings or home renovations.

The Canadian economy will feel the change at showrooms in the new housing subdivision and condo sales offices, the car dealers’ showroom and the shopping mall.

The best path for highly-indebted individual Canadian families is to assume that rates will go higher and to reduce the amount of debt owed, as quickly as possible.