Cyber security and cyber warfare are the latest big challenges for the U.S. security and military leadership, according to retired U.S. Air Force General Michael Hayden who spoke recently at a BCA Research conference I attended in NYC. He described how military intelligence efforts focus more and more on computers, software and cyber-attacks and less on hardware like planes and tanks.

He highlighted a need for more spending and legislative changes that would allow the U.S. government to fight on a more even playing field.

Recent hacks by state-sponsored competitors will increase the sense of urgency.

General Michael Hayden confirmed that operators in Russia, North Korea and China are important actors in the field of cyber spying and state-sponsored hacking but he believes that the U.S. public and American allies, especially in Europe, don’t understand the threat.

Edward Snowden’s leaks in 2013 about NSA’s practices engendered suspicion about big-brother-style surveillance and government-based cyber security. Snowden is charged under the Espionage Act and is a fugitive in an undisclosed location in Russia.

A recent example of a cyber-attack is the leak of Democratic National Committee emails targeted against the Clinton election campaign. This leak is coming from Julian Assange, who is releasing 40,000 more emails in the next three weeks, according to “The Hill”.  These emails would be front and centre in the campaign if non-stop revelations about Donald Trump weren’t taking over the airwaves.

On October 12 2016 in Time, Hillary Clinton’s top adviser suggested that Donald Trump’s campaign had advance knowledge of the leak of internal Democratic emails that he said were obtained by Russian hackers.

“I’ve been involved in politics for nearly five decades. And this definitely is the first campaign that I’ve been involved with in which I’ve had to tangle with Russian intelligence agencies,” said Clinton’s campaign chairman John Podesta. “Who seem to be doing everything they can on behalf of our opponent.”

While attempting to influence an election might seem like a minor thing for Russian hackers, what if the Russians or Chinese were to get vital information about military secrets?

General Hayden raised the specter of this and even more serious incursions, including state-sponsored cyberwarfare attacks. 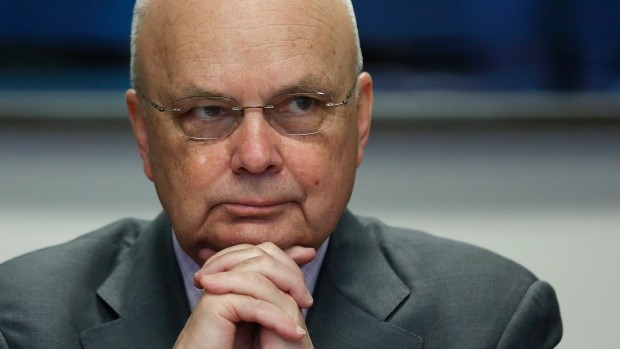 You can watch an interview with Hayden on C-Span, here.

The best example of a successful cyberwarfare attack might be the Stuxnet worm. According to Kim Zetter in Wired the U.S. government was one of the first to employ a virus or worm as cyberwarfare:

2007: The US launched the Stuxnet worm against Iran to sabotage that country’s nuclear program. OUTCOME: Stuxnet succeeded in briefly setting back the Iranian nuclear program. The attack set a precedent for cyberwarfare, wherein countries launch digital assaults to resolve political disputes.

While the ground fight against terrorists such as ISIS continues in Syria and elsewhere, the focus is changing from tanks and planes to cyberspace, a new domain. Hayden calls it the 5th domain along with Air, Land, Water and Space.

Obama’s concern is that a hacker, perhaps backed by a state like China or Russia or North Korea, could write a program that was given the directive: “Go penetrate the nuclear codes and figure out how to launch some missiles.” This doesn’t seem that farfetched since viruses are planted in computers every day.

Early versions of AI were used to block viruses and identify spam emails. But the idea that a “bug” could be planted that would learn how to attack a system and then take over?

Obama says that he is thinking more in terms of viruses and antibodies. “The threat is not a bunch of tanks rolling at you but a whole bunch of systems that may be vulnerable to a worm getting in there.”

It seems likely that we can expect spending increases on secret software programs, cyber security, cyber warfare and artificial intelligence no matter who wins the election.