Described by some as a maverick economist, Hyman Minsky (1919-1996), is best known for his work on the credit cycle. He called his most important idea “The financial instability hypothesis”. This obscure economist received a lot more attention recently and the term — Minsky Moment—reached the mainstream of finance and economics.

Is Canada approaching a Minsky Moment?

The latest Statscan release of household debt showed that Canadians continue to add to their indebtedness, further cementing Canada’s place as one of the most indebted countries in the world, measured by private sector borrowings.

The increase, from 165.2 percent in Q1 to 167.6 percent in Q2, means annualized growth of 5.6%. Not much else in Canada’s economy is growing that fast, except house prices in Toronto. 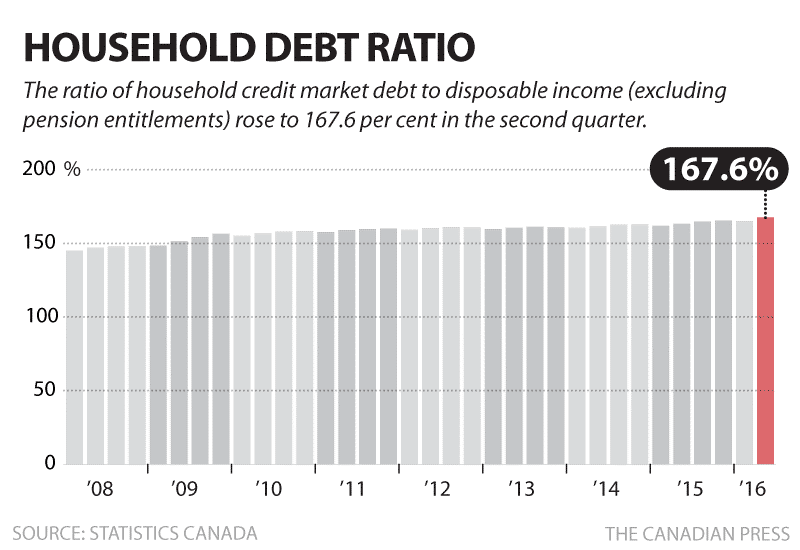 People have been crying wolf about rising debt for years and the ratio of debt to income keeps reaching new highs. And nothing scary has happened; people still go to work every day, Canadians meet their mortgage payments, credit card debt rolls over month to month and life goes on. Economists employed by lenders rush out reassuring reports that measure debts against assets, trying to show that Canadians are wealthier than ever before. 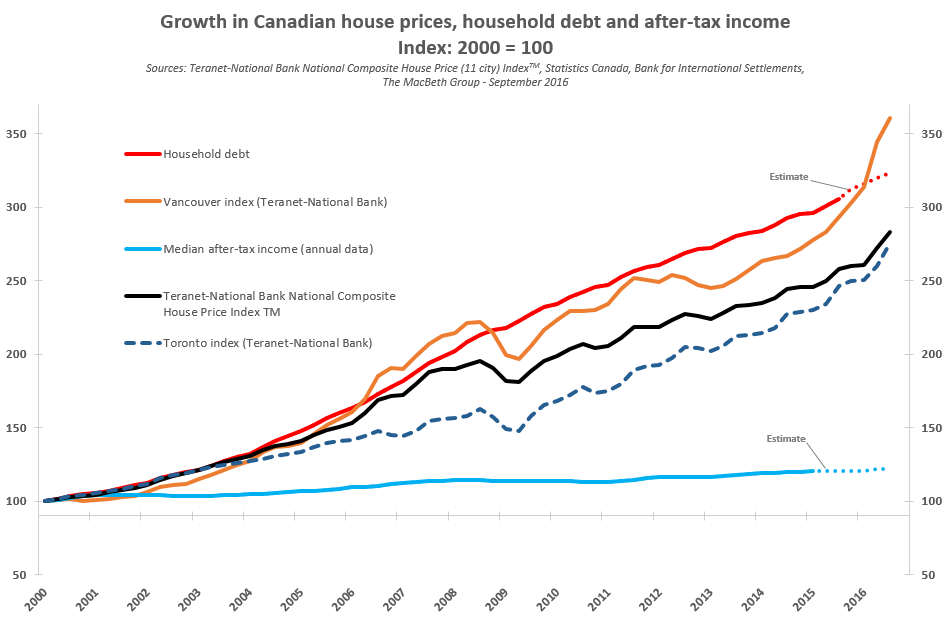 Note: The lines for housing price indicies are derived from the Teranet-National Bank National Composite House Price IndexTM (Teranet) which takes its data from Land Registries in Canada. The Teranet data lags by one month. Canadian household debt and median after-tax income are derived from Statistics Canada and have a longer lag period hence the tails are estimates.

This scenario has played out many times in many countries over the decades. Minsky described situations eerily similar to Canada’s current state in his books and lectures.

In his “financial instability hypothesis”, Minsky stated that the longer the period of stability, the greater the instability of the financial system.

My description of Minsky’s theories are taken from “Stabilizing an Unstable Economy”, by Hyman Minsky, McGraw Hill, 2008 and “Why Minsky Matters” by Randall Wray, 2016, Princeton Press.

Minsky described three phases of the credit cycle. The first phase he called “hedge” finance, a period when income more than covers all interest and principal payments. As the cycle progresses, borrowers become more aggressive and speculative” finance appears. In this second phase, income covers interest payments only and the borrower cannot repay the principal due on the loan. The borrower is “speculating” on the increasing value of the asset perhaps with a plan to flip it once a profit is made. 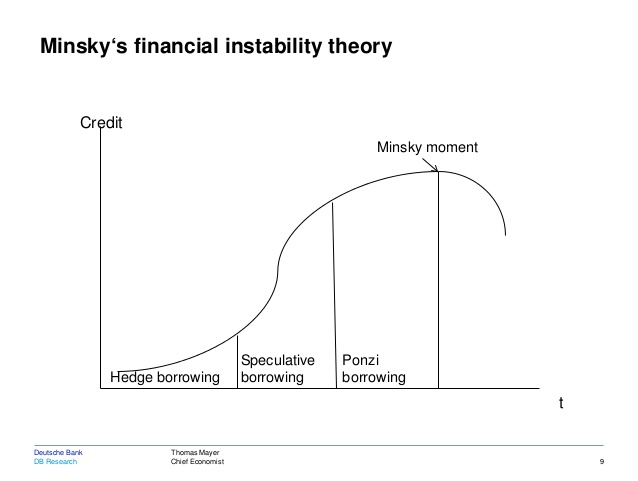 The third phase of the cycle is the “Ponzi” period, named after the famous fraudster Charles Ponzi, who operated in the 1920s in Boston and Montreal. In the Ponzi phase the borrower doesn’t generate enough income to pay even the interest on the loan, so the asset must be sold or the lender must advance more money each time the loan is renewed to cover both interest and principal payments.

Soon after this third phase is reached, income and/or asset prices drop, causing a severe recession and the credit cycle becomes unsustainable.  A “Minsky Moment” arrives.

Once it becomes obvious that borrowers are unable to cover their loans, the crisis escalates quickly. Lenders start to lose money, they seize collateral and try to sell it, and credit losses soar. Regulators impose more stringent rules on lenders, demanding a higher standard to approve new borrowers. Since qualified borrowers are scarce under the new rules, lenders will be unable to find new buyers for the assets they are trying unload.

The decline in asset prices puts more and more loans “under water” and leads to the final liquidation phase. Loans are written off and asset prices plunge. In the more severe version of this cycle, the government has to step in as both lenders and borrowers are unable to meet their obligations.

Canadians, having experienced the “euphoria” stage of the credit cycle for a few years now, could be hearing a lot more about the term “Minsky Moment” if that final phase appears.