Brexit is a symptom

Next week voters will take a vote to decide if the U.K. should leave the European Union. The opinion polls show a very close vote, with a slight edge to the “leave” campaign. But whatever happens next week, the fact that Brexit is being considered seriously means that people’s views have hardened.

When I wrote about this in my Weekend Note on April 15 2016 it seemed that British people are most upset about immigration policies. As well, the cost of Brussels bureaucracy and complicated EU rules are irritants for the “leave” camp. Here’s an example of views about immigration, from Time Magazine on December 16, 2015: 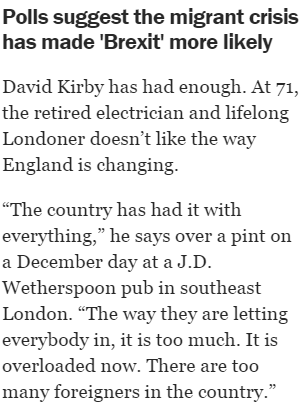 The “leave” vote is heavily supported by people over 65 years of age. 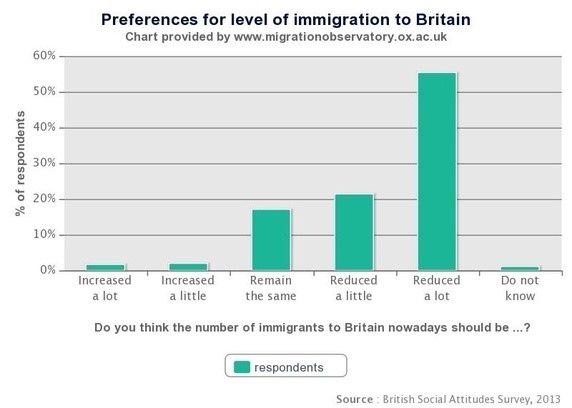 Stories like this from The Sun in London fuel the flames:

A victory for the Brexit camp might win relief from waves of immigrants swamping Britain’s public services and taking jobs but the overall economic impact would be negative. Since services that London provides to the EU, mostly in the highly paid financial sector, would be relocated to the Continent in a full rupture of the relationship, the benefit of Brexit would accrue to France and Germany and the loss would be Britain’s to bear.

A “leave” vote and the ensuing negotiations would hurt the U.K. economy in other ways. The U.K. is in the middle of a housing bubble and a related household debt bubble. A withdrawal of people working in the London banking sector would mean a major loss for the City of London and weak prices for luxury homes.

But the surprisingly large faction that wishes to leave the EU is upset about more than immigration. Their concern shows that the winds are blowing in the direction of change. Motivated by ill-defined feelings of dissatisfaction and malaise voters everywhere are angry. A referendum is a perfect opportunity to express discontent without the restraints of political party tradition. In the U.S. some voters are backing Trump for similar reasons. But the parallel with Trump’s support isn’t perfect since many of Britain’s elite, including London Mayor, Boris Johnson, support Brexit.

While the push for Brexit might have been mostly about immigration six months ago, it has now morphed into a referendum on everything that bothers people. The Conservative Party, led by Cameron, should be worried about the next election, expected in about three years. A far-left government of Labour under Corbyn or a centre-left coalition seems very likely.

In a very sad twist the murder of Pro-EU Member of Parliament Jo Cox, by an alleged “Britain First” extremist, means that more extreme elements of the “leave” camp were silenced, at least for a few days. A special session of British Parliament slated for Monday will extend that period of restraint as people are reminded of her campaign against the spread of hatred. Opposition Leader Corbyn said, “The well of hatred killed her.”

U.K. residents will be the big losers if the vote to leave wins. The European experiment will survive the loss of Britain, as the EU’s economy has more to gain. EU authorities will make a public show of punishing Britain during the negotiations following a “leave” vote, to make an example to others who might be thinking of doing the same.

In the markets expect a strong rally in the British pound if the “remain” camp wins, and continued strength in the price of gold if the “leave” vote prevails.