The first quarter of 2022 came and went in dramatic fashion. Global markets have had to absorb a lot of big macro news. As the pandemic moves to an endemic footing within society, central banks have begun to look at attempting to normalize from 2 years of liquidity injections, and this shift in policy outlook provided a catalyst for the valuation rerating of many of these high-flying technology and consumer stocks.

This environment morphed into a market concerned with the repercussions of the emerging conflict in Eastern Europe between Russia and Ukraine. However, equities staged a rally coming off the US Fed raising interest rates by 25 basis points in mid March.

Commodities in general had a very strong to start the year. This is in large part due to the role that Russia and Ukraine play in key commodity markets globally, and the escalating conflict between those two nations has and will continue to resonate across different areas of the global economy and supply chain and adds further fuel to the inflationary pressures being felt across the globe.

This strength in commodities led Canada to be a winner amongst global equity markets in the first quarter, as seen in Chart 1 and 2.

Unlike most periods of equity weakness, fixed income markets did not provide a place to hide during the quarter. The moves in yield curves upward in anticipation of a central bank policy regime change to combat well-above target inflation levels hurt bond prices. Charts 2 and 3 show the moves in the yield curves in both the US and Canada, particularly in the shorter end of the curve, which has resulted in a significant flattening and inversion of the yield curve, which we will touch on more below, and the performance of different fixed income segments during the quarter. 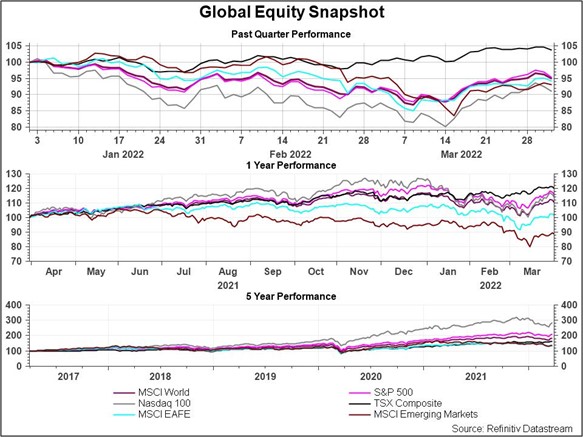 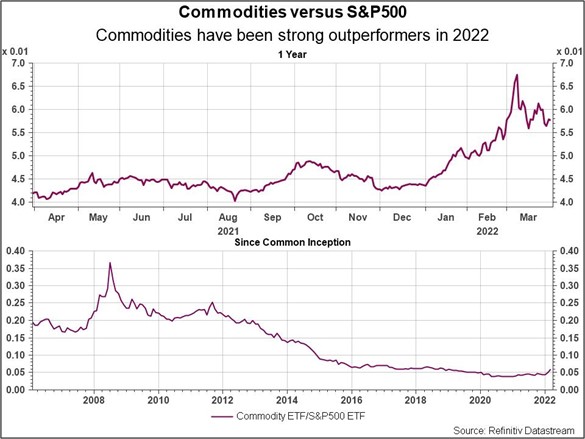 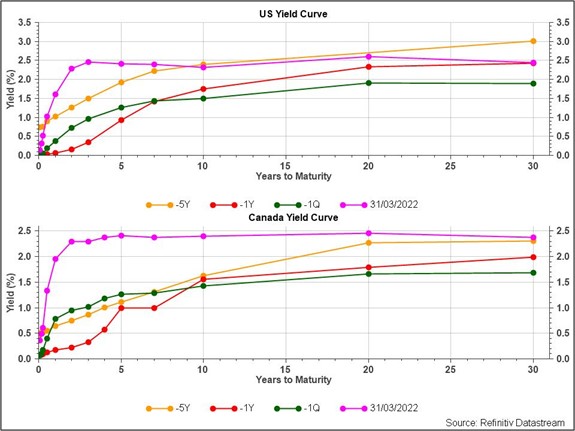 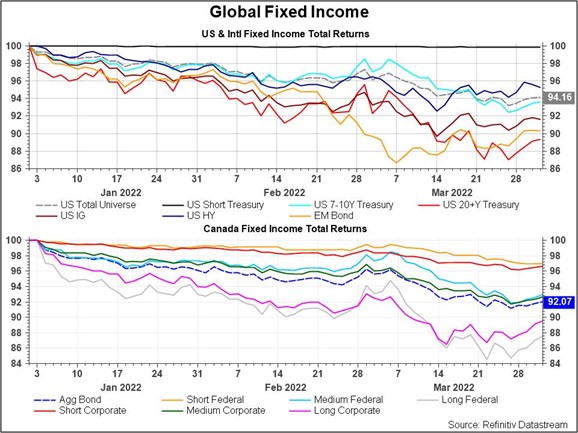 The major storyline stemming from the invasion of Ukraine by Russia, aside from the incredible resolve and determination of the Ukrainian people, is the havoc this has caused in the global commodity markets. The global economy was already facing high inflation levels and pressures from food and materials, and this situation in the short term for the very least, looks set to get worse. Europe is heavily reliant on Russian oil and natural gas for the bulk of their energy needs and will be facing increased energy costs as this continues to unfold. As a result, we have seen Brent and WTI crude prices smash through $100/bbl. We have often said that big moves in energy prices are typically a necessary condition for recessionary environments, and this will bear close monitoring. 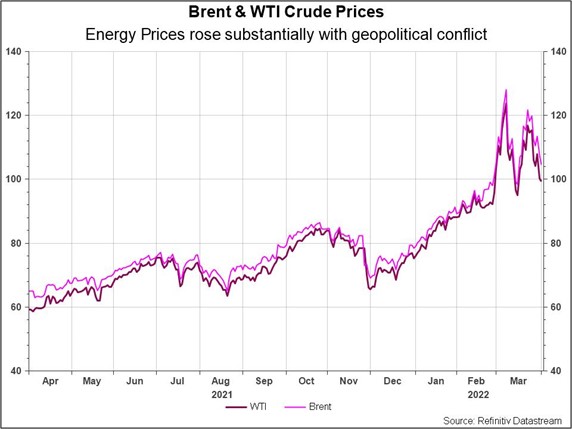 We have already seen that politicians are sensitive to the impact that higher energy costs have on voters, as evidenced by the US recently promising to draw down on their Strategic Petroleum Reserve to help in combating rising prices. With mid-term elections in the US set for November, inflation will very likely become a key topic of discussion and debate.

It is not just energy markets that are getting affected. Ukraine and Russia are large chemical, materials, and wheat producers and exporters. With much of this export supply cut-off, we have seen corresponding reactions in commodity markets in these areas. This has the potential to cause global concerns around food production and supply, as costs for fertilizer have risen dramatically, affecting crop production, and many emerging economies such as India & the African continent rely heavily on wheat exports from Ukraine and Russia. The risks of famine in parts of the world have risen, and along with it, conditions for political and social upheaval. It has long been said that the cure for high commodity prices is high commodity prices, in that high prices destroy demand, and entice producers to increase production and supply, both of which have the effect of self regulating a supply demand imbalance.

We are not immune to these forces in North America. The shocks that had been affecting supply chains, energy and food are set to continue as this war escalates. This raises the possibility of stagflation, where the global economy is growing weakly or in recession, while inflation remains high. This must be a major concern for central banks around the world, who are set to begin a rate tightening cycle, and are currently operating a very tight balancing act. The central banks of Canada, the US, and England have all begun to increase their policy rate, and the market is forecasting an aggressive cadence of hikes moving through 2022 and into 2023.

The major question becomes how much central banks can raise rates without curbing aggregate demand and causing a recession. The bond market in the US has already begun to flash their warning sign, with the spread between the 2-year government bond yield and the 10-year government bond yield inverting, which is the say that the 2-year yield is higher then the 10-year yield. This has historically been a reliable predictor that a recession is likely on the horizon, however the timing remains uncertain. 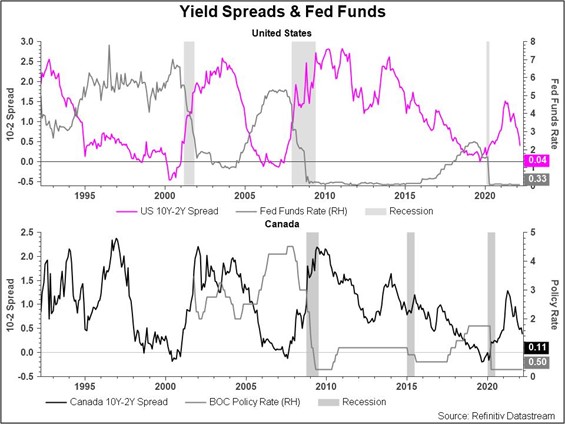 When it comes to what level central banks can raise rates to without causing major demand destruction, the below chart highlights a very different landscape between Canada and the US. The US household witnessed a severe deleveraging coming out the housing crisis in 2008, whereas Canada did not. As such, household debt to disposable income and GDP in Canada looks worse than their counterparts in the US. Therefore, it could be argued that the average Canadian household is likely to feel rising rates more acutely than the average US household. Historically the Canada and US policy rates have tracked each other closely, and it will be interesting to see if that relationship remains intact given the different environments faced by households in each country. 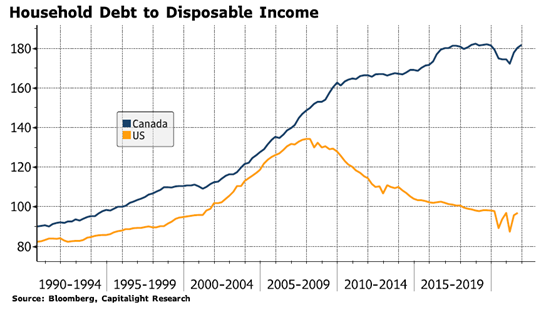 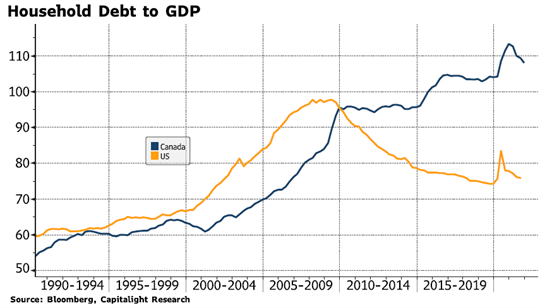 We continue to maintain a measured and disciplined approach to portfolio construction. We have said consistently that we look to invest in high quality businesses, with strong cash flow generation and clean balance sheets. This approach has paid dividends in providing good downside protection in turbulent markets while remaining invested and avoiding many of the extreme valuation businesses that proliferated over the last two years.

We believe that there is actionable investment thesis that come from periods of stress. For example, it appears this invasion has awoken Europe to the need for defense spending. Germany, who the US have tried for quite some time to adhere to the NATO defense spending requirement, appears set to begin to do so. This increased spending should provide opportunities for defense companies to benefit. These trends will influence government budgets and fiscal spending initiatives moving forward.

Within the commodity complex, the question is if this event is the start of a true bull market in the space, or if this is simply a shock to the existing system. If the former, then there is likely significant room for businesses and prices in this space to expand. If the latter, then the likely demand destruction that comes from these price moves will tip the global economy into a recession.

Within energy itself, we are seeing European countries scramble to replace Russian energy. This can be seen a major opportunity missed by Canada, as mistakes and inabilities to develop export capacity over the last decade leave us unable to materially assist in that endeavour. Will we see policy become more accommodating of fossil fuels from high quality jurisdictions, or an increased appetite for growing nuclear? Or will we see politicians double down on calls for renewable energy to be ramped up and prioritized as a way of weaning off traditional energy sources. These questions all have implications for the medium to long term of energy investing.

Within fixed income, we are beginning to see some opportunities within the individual bond space to find some yield, as stresses in the economy have begun to widen credit spreads and yields across the curve are higher. That said, we continue to build a bond portfolio that is high quality. The alternatives sleeve of the portfolio continues to provide a balance of offering attractive income potential and diversification and risk reduction.

Overall, we feel that portfolios are in excellent shape, owning high quality businesses, diversified across asset class, sector, and geography. We expect to continue to tweak the portfolio as opportunities present themselves, and as we can gain more clarity on the geopolitical situation, what areas of the portfolio we want to add, adjust, or remove exposure to.