Inflation in developed economies front and center as financial markets continued their weakness from Q1.

Global financial markets accelerated the weakness of the first quarter of the year. The weakness continues to be broad based, with bonds also selling off during the first half of the year, providing investors globally with very few places to hide. As seen in Table 1 below, global equity markets feel into a technical bear market during the second quarter, while Canada and US bond indices both fell by over 10% for the year.

Within global equity sectors, as shown in the Chart 1 below, Energy is the only sector to have posted a positive return for 2022. Technology, Consumer Discretionary, and Communication Services businesses have led the market to the downside, led by many of the high-flying businesses of the last two years that have seen dramatic valuation rerating along with very valid concerns around their business models driven by years of easy money and zero interest rates.

The onset of real and persistent inflationary forces in the global economy has brought back into focus that money does have value. As less money is pushed into the system needing to find a home and return, there is far less appetite for underwriting money losing enterprises with business models that had no clear path to long term profitability, and the overall valuations global investors are willing to accept today is far different then it was over the past few years.

As the global economy and market environment continues to change and evolve, portfolios should adapt in response to changing conditions in response. However, our core belief that capital should be invested in real businesses with sound business models, clean balance sheets, and be cash flowing and profitable continues to drive our portfolio allocation decisions and process. 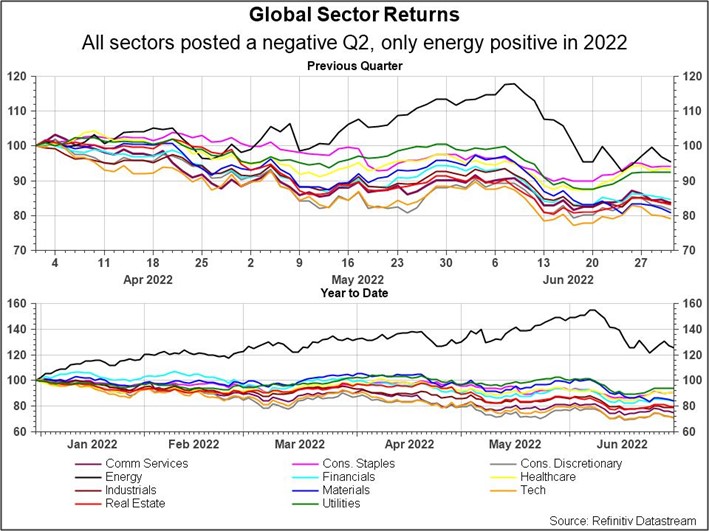 Inflation the Highest since the 1970s

While the conflict in Ukraine continues, we remain very sensitive to geopolitical risks around the world. Many of the issues with respect to commodities and food that we spoke about in our April edition remain very real challenges moving forward and affects the major narrative driving financial markets throughout the past quarter which revolved around inflation closer to home for North American households, and the prices paid for fuel at the pump and food at the grocery store took center stage.

Inflation data is coming in the highest that it has since the 1970’s has provoked increased concerns that policy makers will have to undertake drastic action to combat the inflationary pressures present in the economy. We have seen the central banks of both Canada and the US deliver rate increases of greater magnitude, with the US Fed raising their benchmark rate by 75 basis points at their June meeting. 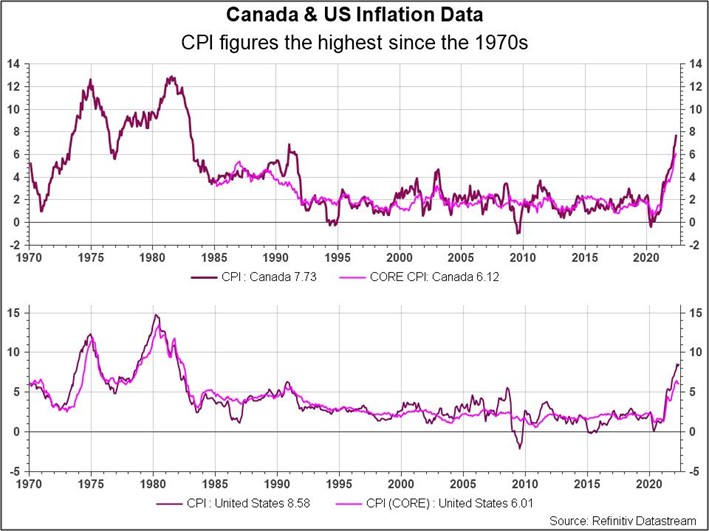 The rapid financial tightening has continued to make its way into the everyday economy. In Canada and the US, mortgage rates have climbed rapidly in response to the rate moves, and we are closely watching how this will affect the respective economies and housing markets. In Canada, we have now had two months of home price declines at a national level, and in the areas of the market that had been particularly frothy, much like the equity market, those areas are being hit the hardest. It is hard to see how the rapid tightening in financial conditions does not temper economic growth moving forward.

We have made the argument in previous editions that the Canadian economy and consumer is likely to be more affected by moves in the housing market, due to the existing leverage on consumer balance sheets. With housing in Canada showing weakness, combined with a tougher market for financial assets, the diminishing wealth effect for Canadian households could have significant impact on consumption. In the US, while housing is likely to stall here given the moves in the mortgage market, the consumer was starting from a much better spot then their Canadian counterparts.

Currently, employment looks strong in both Canada and the US. However, particularly in technology, media, consumer discretionary, and crypto, we have seen several firms come out with announcements that there will be significant headcount reduction due to the current market environment. This has not started to make its way through the payroll data and will bear close monitoring. This is especially true if we see these layoff plans spread out of the technology heavy sectors and into the rest of the labour force. 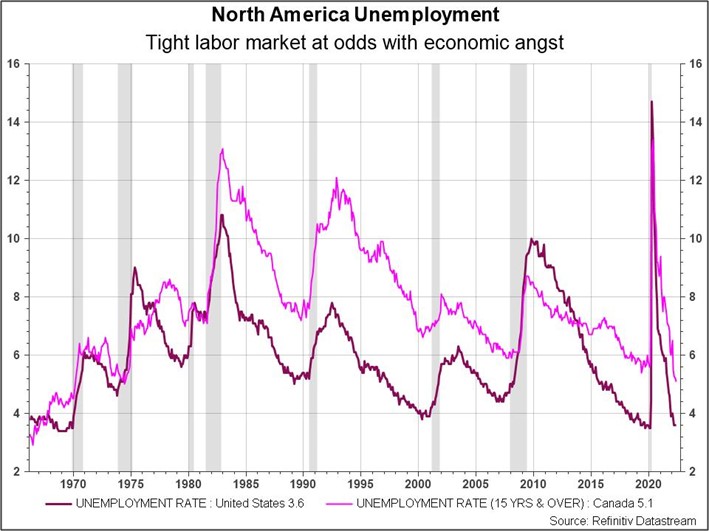 Right now, there is a weird dichotomy where we have strong labour markets, low unemployment, plentiful job openings at an aggregate level, and yet consumer and economic sentiment is at extremely low levels. This is because of inflation, particularly inflation felt at the grocery store and the gas pump. These are the expenditures households cannot avoid or delay, and it is without question contributing to the angst and low sentiment felt by consumers today. This has ramifications not just in the impacts to consumer confidence and consumption, but also in the political arena. We have seen states propose gas tax holidays, monetary support, as well as federal proposals around taxing profits of energy companies.

In our opinion, none of these proposals do anything to get to the root of the problems driving inflationary forces, which is a massive lack of investment by governments and businesses coming out of the 2008 financial crisis. As Covid worked its way around the globe, the intricate and complex global supply chains that had developed due to globalization were found to be fragile and easy to disrupt. Until we see real, common sense policy decisions made by those at the heads of the developed world economies, the only real way to stem inflationary pressures is being targeting the demand side of the equation, which involves lowering economic growth and potentially invoking recession.

While it has been a very tough first half of the calendar year for financial markets, and we may be at the onset of a financial recession, this does not mean that is has to be severe or pronounced. We continue to allocate and invest capital to areas of the global economy and businesses that will come out of the other side of this period in a position of strength. This is a result of our continued focus on high quality, profitable and cash flowing businesses, with strong balance sheets. In doing so, while these businesses will not be immune to general market downturns, our risk of permanent capital loss is mitigated. When there is too much money looking for a home and chasing yield and return in a low-rate environment, the natural market correction mechanism for this is for capital destruction through investments and speculation in businesses and ventures that fail or never grow into their inflated valuations.

It has also been a challenging start to 2022 for bond market participants. However, the benefit to rates ultimately rising off the zero boundary is that investors are now able to buy bonds of high-quality businesses at a reasonable yield, accrue the coupons and hold the bond to be redeemed at par at maturity. Much to our point previously about how money meaning something again has affected valuations and risk, the fact that money means something again in the form of higher interest rates also makes bonds as an asset class a more functional component of a global multi-asset portfolio moving forward.

Data around inflation and around overall economic activity will be very important over the summer months. Global market participants as well as central bankers, will be looking for signs of either inflation peaking, or economic health declining as inflation and tightening financial conditions curb demand. It is difficult to envision a durable market bottoming process absent inflation rolling over or central banks changing expectations for rate hikes in the future. As such, we will continue to look for mispriced opportunities in both equities and fixed income. This is where the fun of investing is, finding great companies at reasonable prices that can compound investor capital over the long term. This is how money will be made on the other side of this difficult period. A quote we have used in previous editions from Mr. Warren Buffett, “be fearful when others are greedy, and greedy when everyone’s fearful”.