We are rapidly into the second half of 2021. The last three months have seen inflationary pressures and major supply chain disruptions become the dominant story and narrative within financial market coverage. Amid this, we find it very interesting that the bond market remains relatively sanguine about the specter of inflation over the medium to long term.

The previous quarter saw yield curves in North America give back some of rise in yields seen during the first quarter of the year in the longer end of the curve, as depicted by the purple and green lines in the chart below.

This move is surprising in the context of strong inflation readings in the present day as supply chain shortages and returning demand push prices higher. Conventional thinking states that nominal yields tend to rise with increased inflation expectations in the future to account for the effect inflation would have on the income stream in real dollar terms. This thinking was attributed to part of the move seen earlier this year when long yields experienced a sharp rise.

The falling of yields during the quarter provided some relief to broad fixed income indices, particularly longer duration areas of the market, as can be seen in Figure 2 below.

Within credit, spreads broadly speaking remain very tight by historical standards, as the credit markets are pricing in low bankruptcy risk, which is in large part a function of the actions central banks took in credit markets during the depths of the selloff in March of 2020. We discuss later in this newsletter how these actions, while certainly necessary to avoid a more severe economic recession, has led to growth of “walking dead” companies. As such, remaining selective with respect to which credit exposures to take on remains very important to our fixed income positioning today. 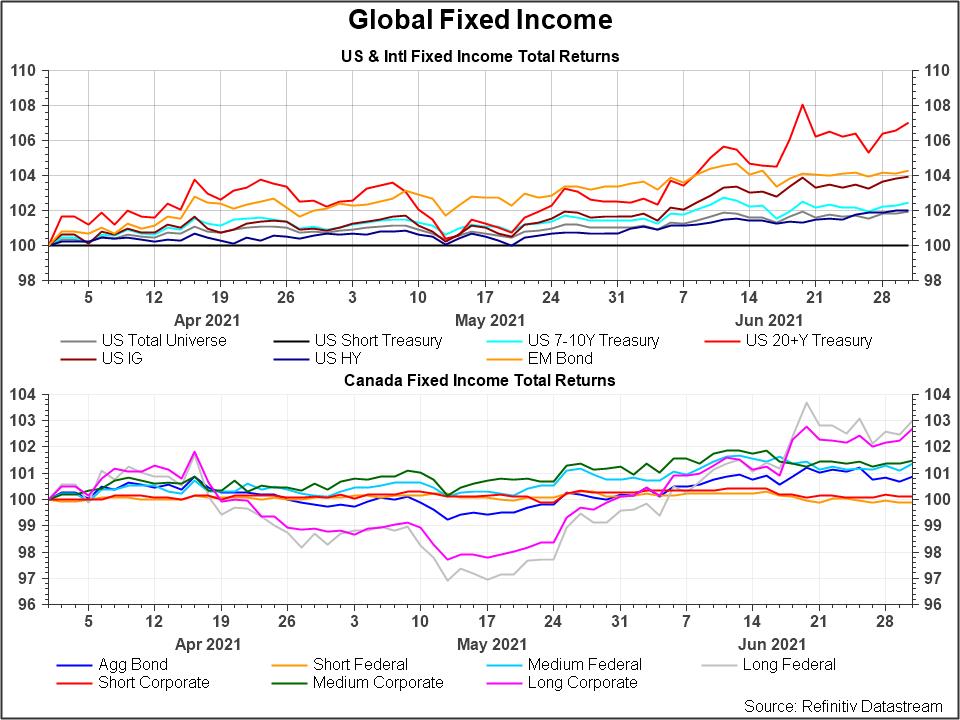 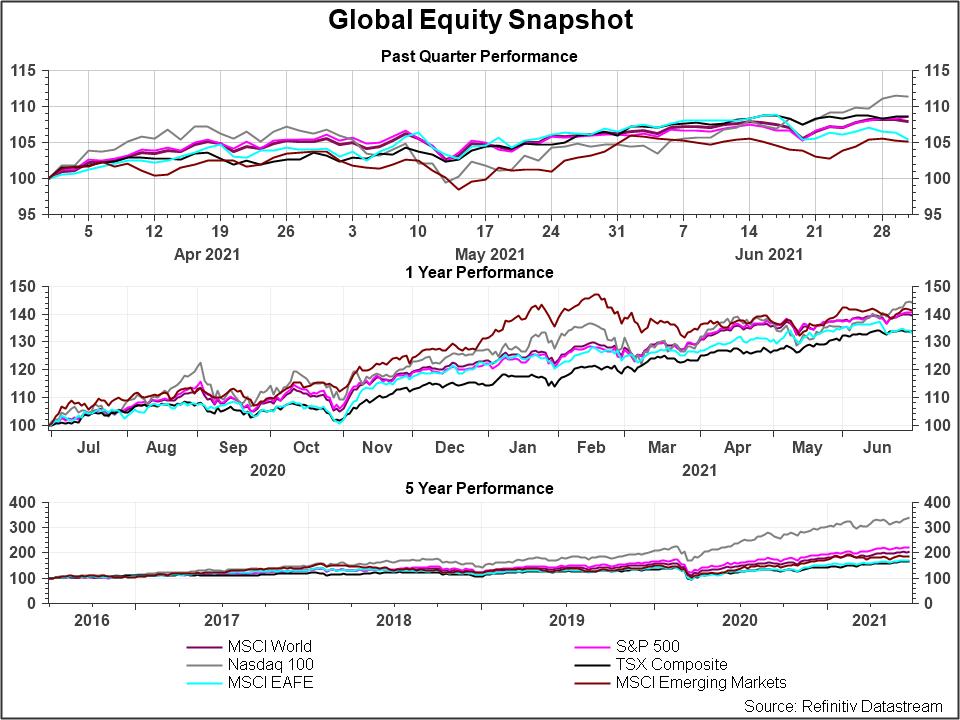 Global equity markets were broadly positive over the quarter as seen in Figure 3 above. This breadth can also be seen in the performance of the major sectors in Figure 4 below. All sectors globally are positive for the year, and while the more cyclically attuned sectors continue to lead the way for 2021 in energy and financials, during the quarter we did see technology also participate. While value was the clear leader at the start of 2021, growth recovered somewhat during the second quarter. In Figure 5 below, we can see that growth has recovered some relative strength versus value, evidenced by a rising line. Whether this is simply a pause if the value rotation or a genuine end will be something to watch closely as we move through the back half of 2021. 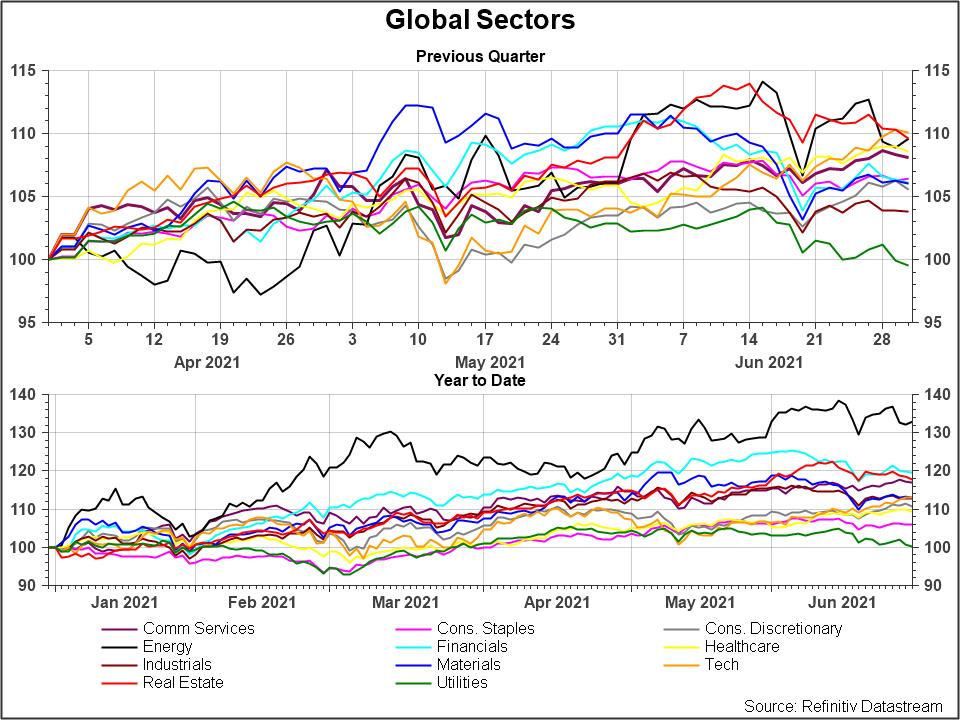 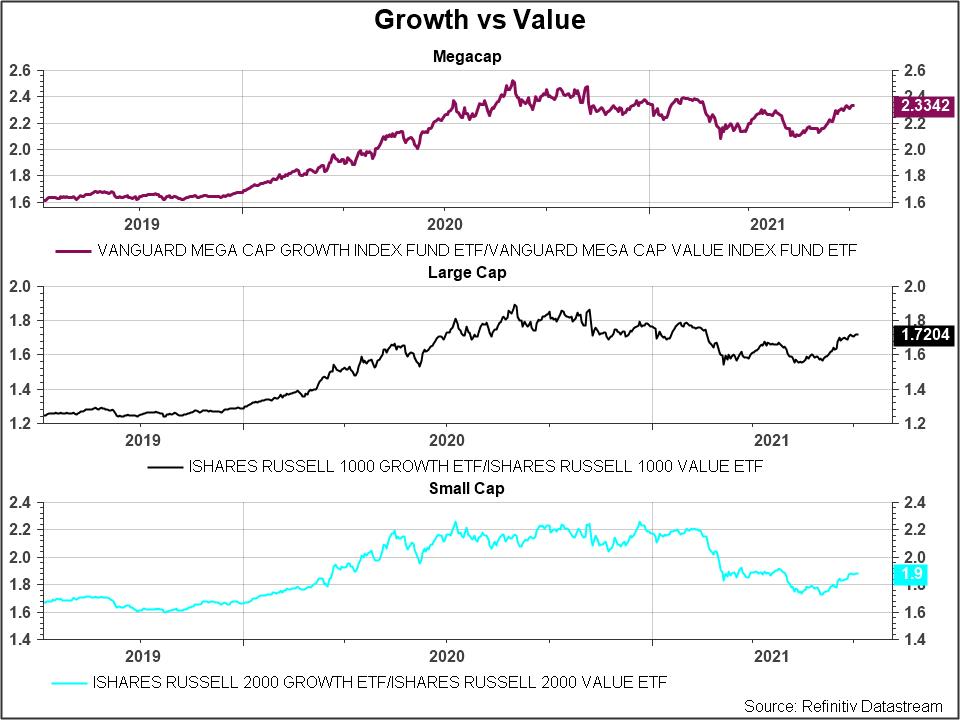 Rise of the Walking Dead Company

More than a year ago, market participants globally were very worried about a major solvency crisis. With the pandemic and resulting lockdowns depriving many businesses of their revenue, it seemed entirely reasonable that a wave of defaults on credit and bankruptcies would hit the financial system like a hurricane, choking the banking system and bringing asset prices down with them.

This view can be seen the by the initial seizing in the bond market during the initial phases of the 2020 selloff, and the subsequent widening in credit spreads in both investment grade and high yield. However, thanks to the actions taken by central banks in the US and around the globe, this potential reality was averted during the last year. Fiscal and monetary policies restored order and a willingness to transact in the credit markets, resulting in a dramatic tightening of spreads to near record lows today.

This has given rise to the notion that the interventions by central banks, while successful in avoiding a far greater economic downturn, have warped some of the longer held beliefs in the bond market. There was historically a strong relationship between the expected defaults and the strength of the underlying economy. Today, we find weak, unprofitable, or over-leveraged businesses remain going concerns. These companies appear incapable of growing themselves out of their poor capital structure, and by remaining solvent in a low interest rate world continue to tie up capital that would otherwise be put towards more profitable and productive purposes. This operating state has been called many things, but we liken these businesses to the walking dead. It is a classic case of a well-intentioned action in a time of crisis having less desirable second or third order consequences as a result. 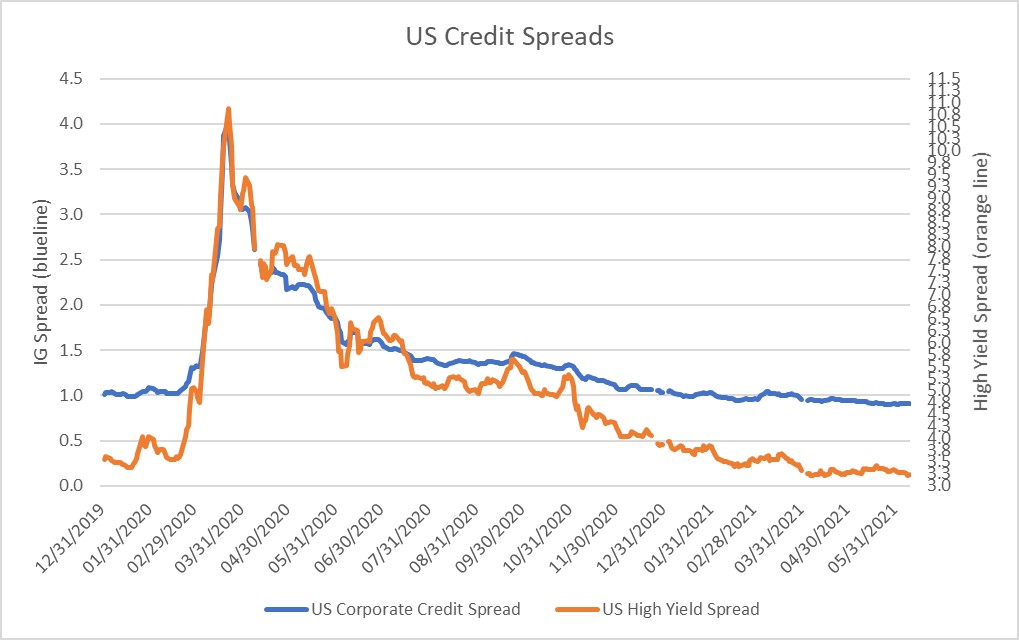 While the world continues to recover from the pandemic, supply chain disruptions and bottlenecks are causing stresses across parts of the global economy. The semiconductor shortage for example has slowed global auto production, as well as directly aiding in the price rises of used cars and electronics. These spikes in prices across various industries in the economy has resulted in some lift in many core inflation measures and has led many to wonder if the days of low inflation are unlikely to return. Another important segment of the global economy seeing rising prices is crude oil, where producers, particularly in the US, have not responded to resurgent demand.

While there are other areas that have seen similar dynamics driving volatile price moves, such as lumber, from a global macro standpoint, we believe semiconductors and oil have the potential to be the most impactful. It is no secret that semi-conductors are used in increasing numbers and in more and more products. Major global trends in 5G and the internet of things (IoT) will continue to require increased demand for chips in everyday products such as smart fridges, thermostats, and vehicles. As such, the disruption felt by lack of supply of chips is felt across many areas of the consumer economy. This supply shock has spurred countries such as the US to invest and subsidize domestic production of semiconductors. This is part of the intensifying competition between the US & China, with much of the current global chip production taking place in Asia.

In contrast, the oil market faces different dynamics. Here, where demand has been recovering from its pandemic lows, the supply side of the market is not responding to these higher price signals. That, coupled with longer term underinvestment being driven by social & regulatory pressures, could result in a different sort of supply side inflationary pressure buildup. Many previous economic downturns can be traced back to major moves up in oil prices. It is worth noting that the oil efficiency in the economies of both the US & China has improved quite a bit over recent years, implying that it may need a larger price shock to trigger recessionary pressures in either country. That said, the price of oil is one we continue to watch closely as continued price increases could push into a more defensive posture. 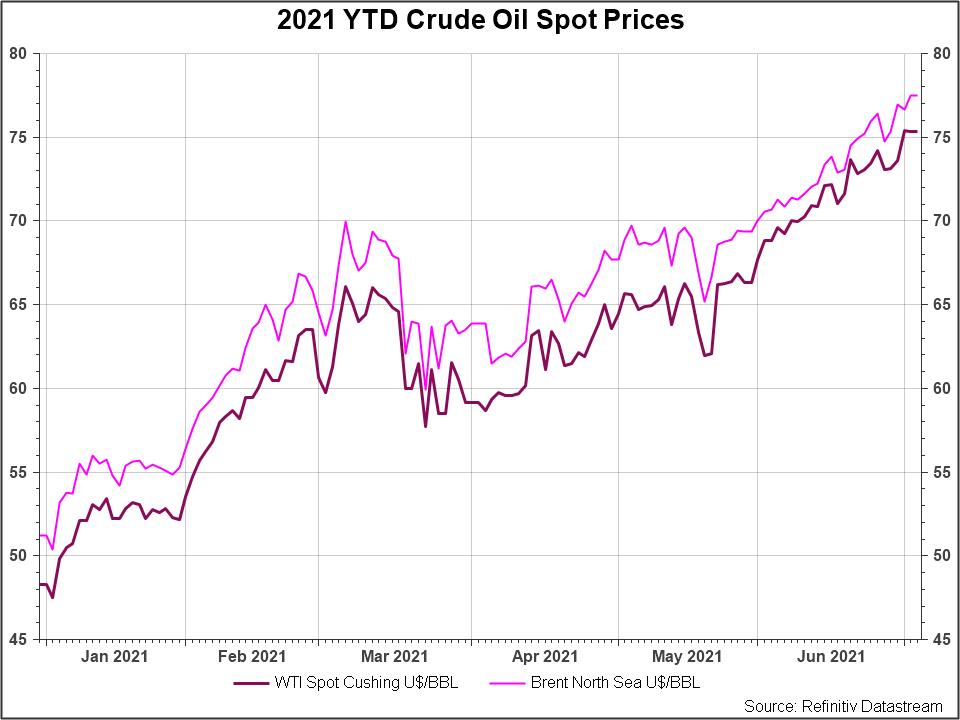 Figure 7: Brent and WTI spot prices have strengthen during 2021

The main portfolio implication for global investors is whether these supply shocks and resulting price pressures are symbolic of a new economic reality rooted in an environment of higher inflation, or if these shocks are exactly that, shocks, and the pressures are “transitory”. On this, there are certainly cases to be made on either side.

The reversing globalization trend can certainly lead us to an environment where businesses are not solely focused on optimizing supply chains to minimize production costs, which could result in higher prices. At the same time, the case can be made that increasing production capacity globally for semiconductors will yield deflationary pressures in the global economy as more supply comes online. Ultimately, time will tell, and the economic data over the remainder of 2021 will be closely watched as we move past comparable periods that consisted of a world in lockdown to see the true trend.

After 2020 was dominated by technology, speculative growth, and work from home beneficiaries, 2021 has seen more cyclical growth sectors take market leadership. Energy, financials, and materials have been the best performing global sectors year to date. This rotation makes sense in the context of a recovering global economy, and continued economic data pointing to a sustained recovery gives this rotation more potential room to run.

While there are many moving pieces right now, we see four broad scenarios summarizing potential outcomes over the coming months:

As such, we favor a barbell approach in portfolios that includes some cyclical sector exposure in energy, financials, global infrastructure, and materials that stand to benefit from a recovering global growth environment. The other side of the barbell continues to invest in many of our longer-term secular growth areas, such as cybersecurity, medical devices, and technology. Across the portfolio, we remain focused on investing in high quality businesses, with strong balance sheets and cash flow profiles, as we retain conviction that fundamentals do matter, and that owning strong businesses provides the best way for generating strong long-term risk-adjusted returns.

The opinions expressed in this report are the opinions of the author and readers should not assume they reflect the opinions or recommendations of Richardson Wealth Limited or its affiliates. Assumptions, opinions and estimates constitute the author’s judgment as of the date of this material and are subject to change without notice. We do not warrant the completeness or accuracy of this material, and it should not be relied upon as such. Before acting on any recommendation, you should consider whether it is suitable for your particular circumstances and, if necessary, seek professional advice. Past performance is not indicative of future results. Richardson Wealth Limited, Member Canadian Investor Protection Fund. Richardson Wealth is a trademark of James Richardson & Sons, Limited used under license.