An Extremely Strong Start to the Year for Equities 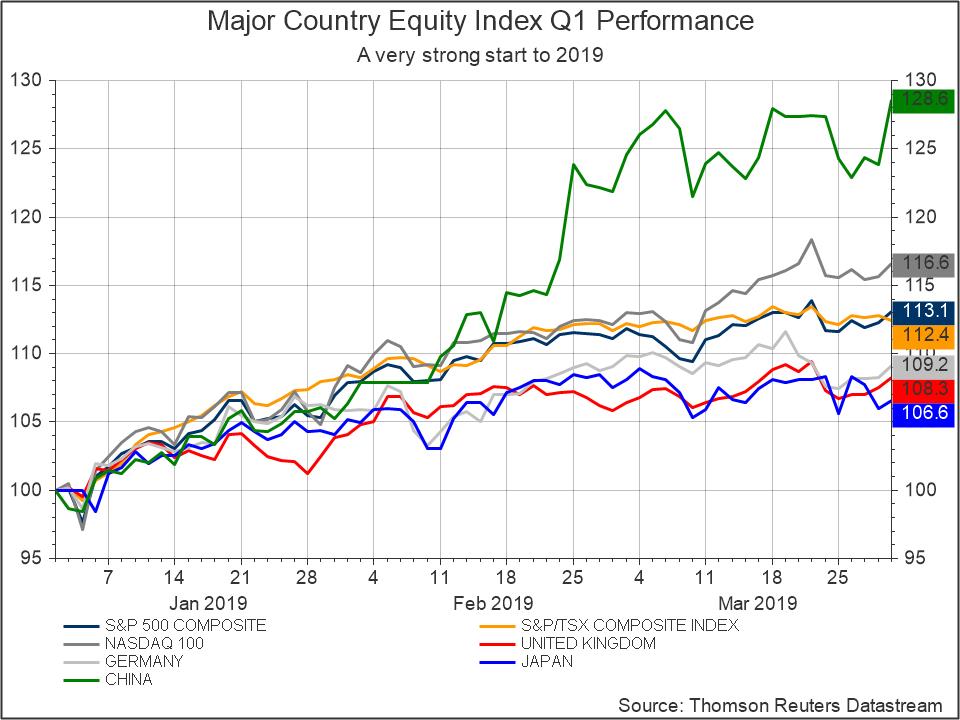 A strong start to the year for most major equity markets

Global equity markets staged a furious comeback in the first quarter of 2019, erasing most of the correction that took place in the final quarter of 2018, as shown in the chart at the top of page 2.

The expectations from the Fed have moved from two hikes in 2019 at the December meeting to one rate hike as of their last meeting in March. The market is implying however, that the next move for the Fed will be a rate cut. It is always important to consider what the Federal Reserve thinks as well as what the market is implying, as major disconnects between the two can introduce excess volatility.

Regardless, it is at this time reasonable to conclude that the Federal Reserve, in the absence of an overheating economy, is firmly on pause for the time being, which has contributed to the sharp rebound in equity markets. 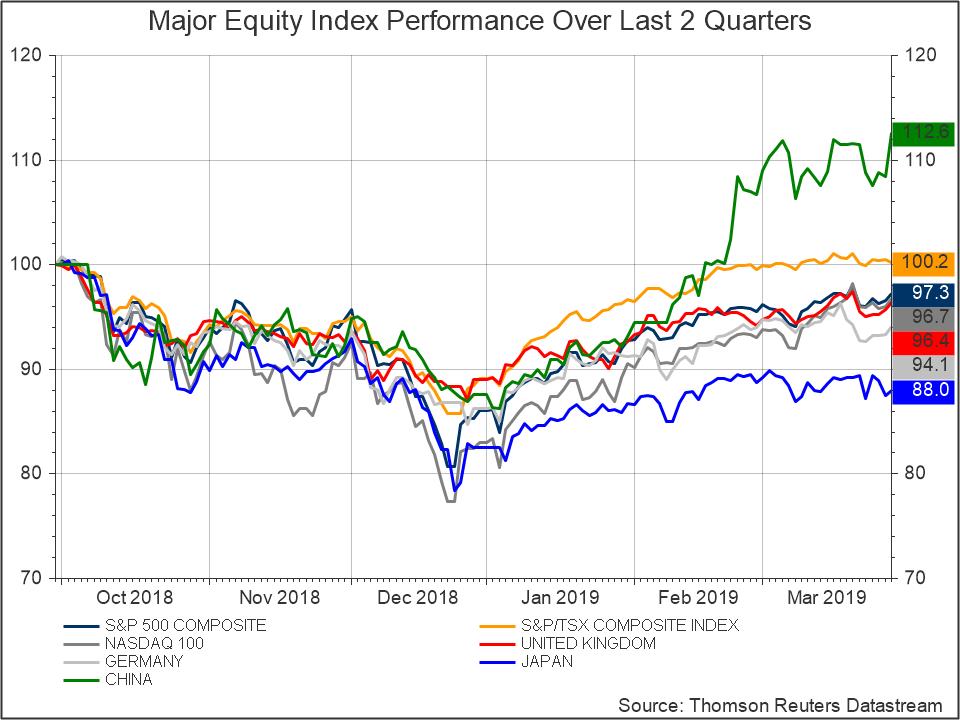 Global markets erased most of the correction from Q4 2018

With regards to the second major area of interest, the US and China continue to creep towards a resolution in their ongoing trade negotiation. While the March 31st deadline came and went without a firm deal in place, as of now both countries are working towards an understanding and as such further tariff escalation tactics are not currently being implemented. This has been taken positively by market participants. China being the best performing major equity market in the first quarter shows continued belief in the global markets that the worst is behind us with regards to the trade war between the world’s two largest economies. With that being said, we continue to monitor developments in this area, as any abrupt change in tone or expectation would re-introduce uncertainty and increase risk.

Focusing on North America, it was a strong quarter across the board. All sectors in both the Canadian and US equity markets exhibited positive price performance. 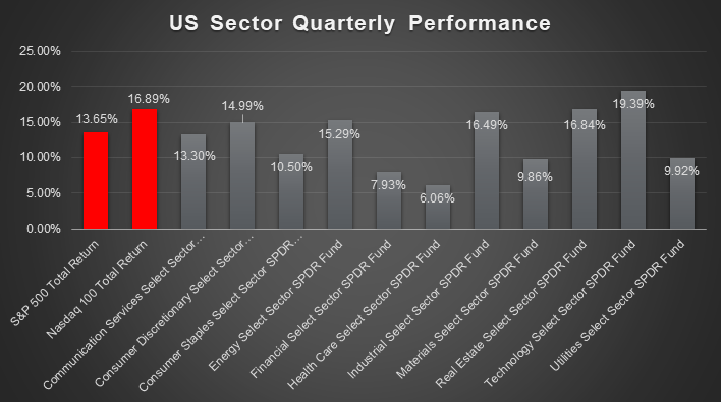 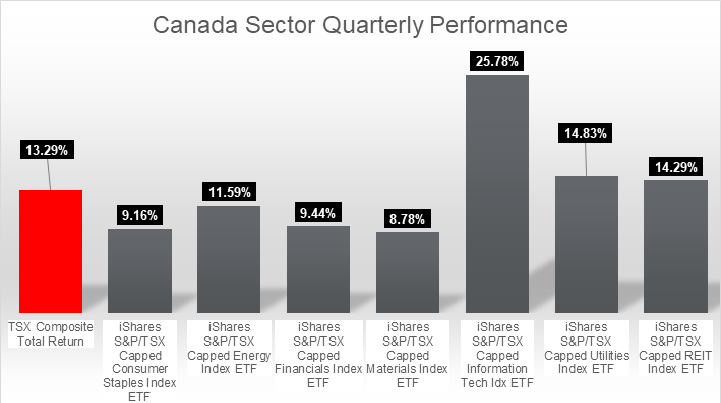 What About Fixed Income?

The first quarter of 2019 was also a strong quarter for bonds, with yields falling across the curve, particularly in the long end. A reminder, when discussing fixed income, yields and price are inversely related. That means that when we state that yields fell, we are implying that prices rose, and vice versa.

Moreover, after widening out during the market correction in Q4, corporate yield spreads tightened over the course of the first quarter. A yield spread is the spread between what a corporate bond, i.e. risky asset, is yielding above the government bond, i.e. safe asset, at the same maturity. So, if a corporate bond with five years to maturity was yielding 4.25%, and a five-year Government of Canada bond was yielding 2.25%, the spread would be 2%. As spreads tighten, corporate bonds prices increase faster than governments, and yields correspondingly decrease at a faster level. Tighter spreads are typically associated with more risk-on environments and positive economic backdrops. Therefore, when spreads are tightening, this is positive for bond price returns.

This decreasing yields and tightening spreads can be seen in the price return of the Canada Universe Bond Index, which rose 3.29% over the first quarter of 2019. As such, you could argue we had a Goldilocks scenario unfold over the first quarter, with both major asset classes, equities and bonds, contributing positively.

The following two charts show the government yield curves for Canada and the US. The red line is the curve at the end of December, and the green line is the curve today. Note that we are starting to see inversions in the yield curves of both countries, which has proven to be a reliable indicator that recession is on the horizon, however the timing of the signal is varied and can range from 6 months to 2 years.

A yield curve inversion occurs when a shorter-term rate moves above a longer-term rate. For example, when looking at the Canada yield curve below, the 1-year treasury rate is higher than the 2 year through to the 10 year. The yield curve inversion has a been a hot topic within the financial media circus as a predictor of an oncoming recession. While there has been much overhype as is the norm in the media, we are certainly not dismissive of the potential implications that the bond market is signaling and continue to monitor leading economic indicators intently.

Strong shift down in the Canada Yield Curve, as shown by the lower green line

Likewise for the US Yield Curve

Looking back at the first quarter of 2019, the market rebounded from the lows of the sell-off in December, which we felt at the time was overdone. The change in direction from the Federal Reserve certainly helped solidify this, and US markets are within striking distance of their all-time highs seen last summer. We witnessed a Goldilocks type scenario, with strong equity markets, tightening spreads, and a lowered yield curve contributing to strong performance in both equities and fixed income.

We continue to believe the US is still the best house on the block, and while growth in corporate earnings and GDP is likely to slow from 2018, our base case is still for a growing economy south of the border. The case for growth in Canada is a little tougher to come by, mainly due to continued challenges in the energy sector, along with the overall leverage in the Canadian economy, and signs that the consumer may be looking tapped out, which would be a headwind for domestic consumption.

It is difficult to see Canada slip into a full-blown recession while the US economy grows, as most of Canadian corporations and GDP are driven by export to and demand from the US. As such, from a Canadian economic perspective, we continue to watch the economic picture in the US very closely, as well as keep an eye on the two major elections taking place over the course of this year, with Alberta first up this month, following by the federal election in the fall. The outcomes of both of those elections could go a long way to solving some of the fundamental policy issues that have caused foreign capital to flee from Canada, particularly in the energy space.

From a portfolio allocation viewpoint, we continue to see no immediate signs of recession. While we remain comfortable with our core holdings during this market rally, we are always paying attention to late cycle dynamics that can alter our views. On the fixed income side, we are looking to increase our duration and exposure to high quality bonds within the fixed income sleeves of portfolios. We continue to look at specific alternative asset classes and investments that show little correlation to equity markets as a hedge against downside risks posed by more challenging economic times and markets that will inevitably arise.