Looking Back Over the Past Month and Plotting a Course Forward

This newsletter contains a discussion with a nervous client after a dramatic month in the equity markets, particularly in the United States

Client: What a month October has been in the markets! Does this mean we are looking at a possible recession?

McCulloch & Partners: It has indeed been quite the month of October, not only from the standpoint of the overall decline in dollar and percentage terms., but also the suddenness and swiftness of the decline. We did state in our quarterly newsletter at the start of the month that we anticipated a return of volatility in the short term leading into the United States midterm elections on November 6th.

Chart 1 shows the performance of the major indices globally over the course of the month, re-based to 100. As you can see, October has been a tough month across the globe; the weakness we saw in the equity markets globally finally seeped into the United States. The US had been the lone driver of growth globally during calendar 2018, and the S&P 500 has seen nearly a full year worth of gains wiped out in one month, shown in chart 2.

The real question right now is if this is a correction like the one experienced in February of this year or are we in recession. When discussing the probabilities of recession in the United States, we have seen little in the way of fundamental economic data changes over the past month to support materially changing our view of not seeing a recession over the next 6-12 months. By most data points, the United States continues to exhibit strong economic growth, and many of the leading economic indicators (as exhibited by a leading economic indicators index - chart 3) continue its uptrend from the 2008-2009 bottom. This coincides with our view that recessionary forces are not at hand. Therefore, the most likely explanation for the market drawdown is an overdue correction and pause within the continuation of the bull market we have enjoyed over the past decade.

While we currently view the fundamental economic picture currently in the US as supportive of an extension the current market cycle, we are watching carefully the growing list of events and factors globally that do have the ability to begin to change our economic outlook.
Chart2 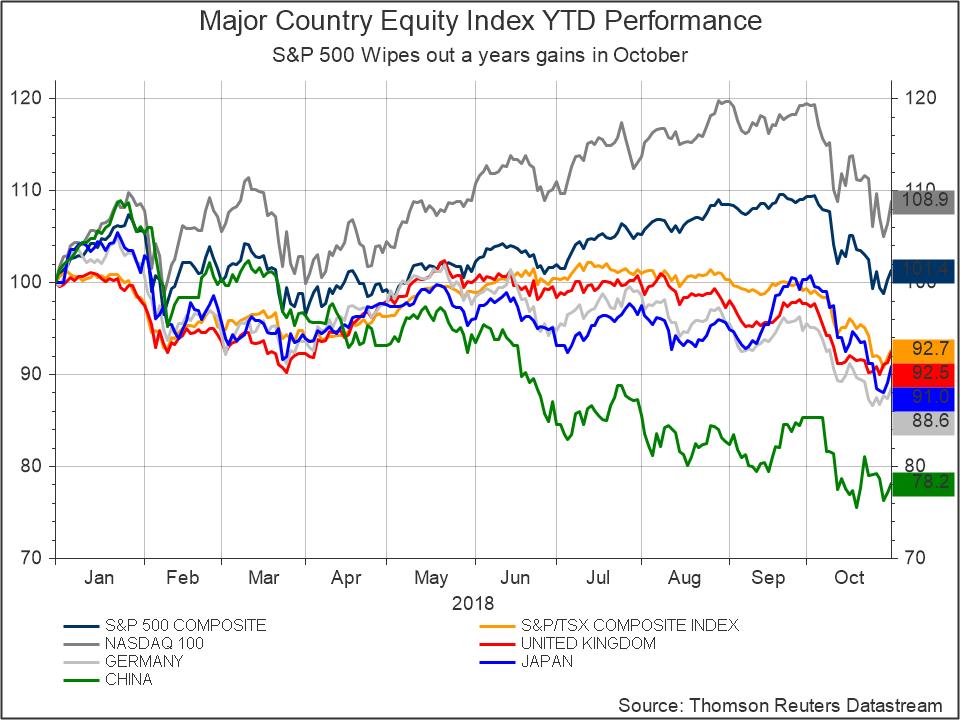 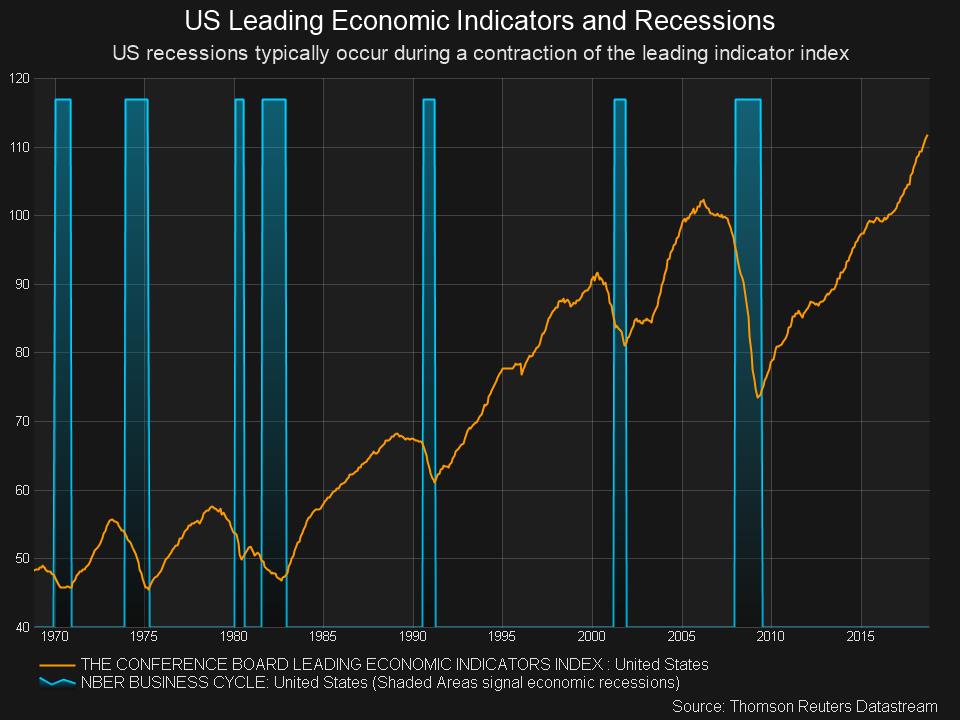 Client: What are these events that you are watching that have the ability to change your outlook?

McCulloch & Partners: Well there are certainly those we have highlighted in depth in previous newsletters, such as trade wars. With the resolution of the USMCA deal, the key focus will be the ongoing US/China trade wars. Continued escalation of this war could have the ability to cripple the global growth outlook; the tariffs being erected by both sides are starting to affect the global economy, particularly those in the industrial sector.

Beyond China, Europe continues to face headwinds, and while Brexit is still a headache to the EU, the emergence of Italy as a major event can pose problems for Europe. Italy is the fourth largest EU economy as measured by GDP, and the escalating fiscal conflict between the coalition ruling party in Rome and the EU leadership in Brussels can have large ramifications for the European Union as a whole. Europe has lagged the United States in performance terms over the last 10 years, and continuing tensions within the EU make it hard to see that underperformance changing.

Inflation continues to be a data point we want to watch closely here. A quickening rise in inflation could cause central bankers to raise interest rates more rapidly than the market currently has priced in, which has the potential to bring the current expansion to a halt. As the old saying goes, “bull markets do not die of old age”. The punch line tha saying is that they usually die because of central bank over-tightening. It is not unreasonable to attribute at least part of this October market action to participants digesting the fact that rates are much higher then they have been for some time. This affects equities negatively in several ways, from the discounting rate applied to future cash flows to asset-allocation decisions between fixed income and equities.
Chart4 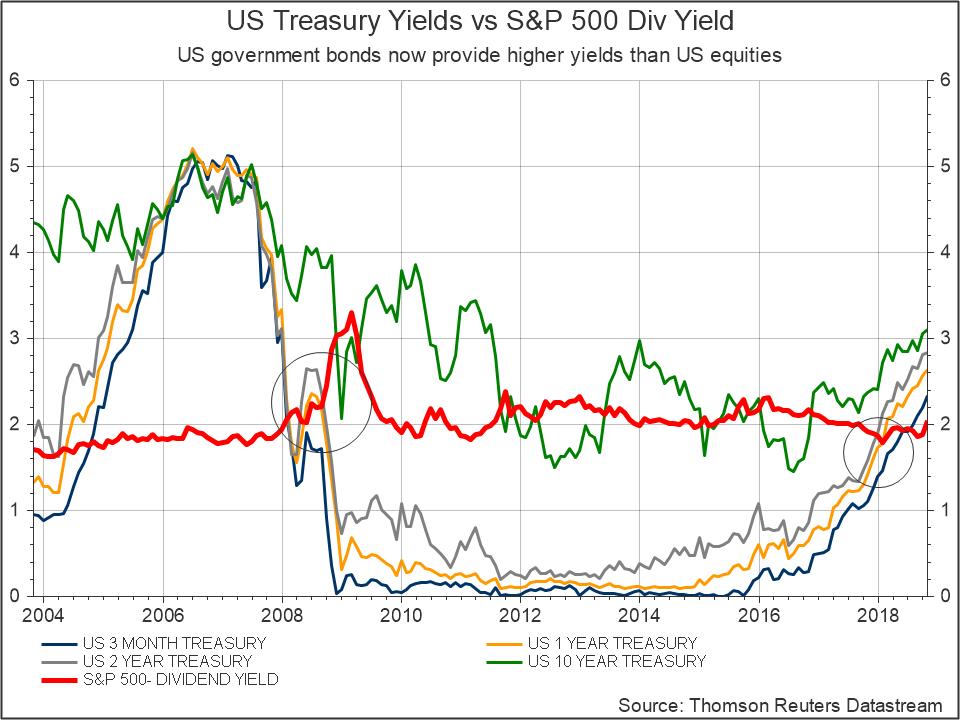 Another topic is overall debt in the world. Many governments continue to run budget deficits and increase borrowing in an attempt to stimulate their economies. This, combined with a prolonged period of low interest rates, has led to dramatic increases in both corporate and government debt. While it is likely that at some point there will need to be a resolution to this debt buildup globally, corporate spreads have remained tight over the course of this month. If bond market participants were exhibiting concern about rising default risks in credit, corporate spreads would have been widening. Therefore, while over the long term overall debt levels are a risk and a concern, they are not currently flashing intense warning signs.

Client: If this is the start of a recession, how would we position the portfolio to protect my capital?

McCulloch & Partners: We have been naturally taking a more defensive position in client portfolios over the course of 2018; we have increased alternative exposures, and we have upped our allocation to covered-call strategies that allow us to generate more yield and income from holdings while also providing some downside protection. We have also been focusing our attention and due diligence on companies and investment options that display defensive business models or mandates, with strong cash flow generation capabilities better suited to withstand economic downturns.

If and when we begin to see our recessionary indicators light up, we plan to reduce our remaining cyclical holdings, raise cash levels, reduce overall equities, and increase longer-term government bond holdings and alternatives. We feel that this action plan and asset allocation through a recession would provide our clients with a strong level of capital preservation potential.

Client: You have talked quite a bit about the US and global outlooks, but what about Canada?

McCulloch & Partners: That’s a great question. Firstly, the reason the US gets so much coverage is because the US is still the world’s largest economy, and on the whole, globally we are not going to have a major economic expansion without the US participating. On the other hand, it is highly likely that if and when the US enters recession the rest of the world is going to feel that in a big way.

With respect to Canada, we would describe our views as decidedly less bullish than our views for US. We find it quite difficult to point to a catalyst for growth for Canadian businesses. It is worth mentioning that when we look for growth sectors in the Canadian market, we are looking mainly at the materials and energy sectors; the other sectors (financials, utilities, communication services) exhibit much more defensive attributes. As such, when considering Canadian investment ideas, we have a strong focus on cash flow generators, with good, stable, safe dividends. In the current political environment, particularly with respect to the energy sector, it is tough to envision Canada outperforming the US. We need to see a more pro-business environment in this country!

All in, we continue to view and allocate to Canada with a more defensive tilt, favoring strong dividend-paying investments.

Client: Thank you for that. It sounds like overall, you still have the view that this market sell-off is more typical of a correction within the overall expansion and that this could be an opportunity to add to some existing and new core holdings

McCulloch & Partners: Correct. That would be the overall view we share right now. It is always concerning to see markets fall over a short period of time. Remember the timeliness Warren Buffett quote, that it is wise to be “fearful when others are greedy and greedy when others are fearful.”