While the US stock indices continue to drive all the global growth, taking out their January all time highs recently, the media and many of the world’s eyes are focused on the ongoing intrigue in Washington, which is more reminiscent of Netflix’s House of Cards than the real world. At the time of writing, the market was showing that the saying “the market makes the news, the news does not make the market” holds true. As for all of the drama surrounding President Trump and his inner circle, and now expanding to the very public Supreme Court appointee Kavanaugh hearings, the US economy remains strong, and the US markets continue to push new all time highs. This presses home the point, that as an investor of capital, it is very important to not fall prey to sensationalized news flow and emotion, and to be able to look and work through the abundant noise barraging everyone everyday in today’s world, find the important takeaways, and then have the conviction to act on those takeaways.

That said, we feel that the heightened tensions in Washington should lead to increased volatility in the markets, which we saw play out in September after very strong market performance over the summer. As headlines and speculation tend to fuel short term decisions, investors may have to contend with any unforeseen and unknown actions/promises/declarations of political actors on both sides of the spectrum heading into mid-term elections in November. This can also be seen in how the US actively pushed for a firm deadline on a renegotiation of NAFTA. At the time of writing, this re-negotiation looks to have resulted in an agreement amongst the three parties, Canada, the US, and Mexico, to be known moving forward as the USMCA, which unfortunately is a bit more of a mouthful to say! As Canadian investors, this finalizing of this new agreement is an important process to follow over the short term, as the US and Mexican governments ill likely want to finalize and pass the new treaty in short order for differing reasons. How much the USMCA differs from the previous NAFTA arrangement needs to be seen, but, with this agreement in place, the US can focus more exclusively on their escalting trade dispute with the emerging world power that is China, which has the potential to derail the global growth story for good and cause serious shocks to the world economy.

Longer term, when evaluating US politics, or politics at all for that matter, we need to ask ourselves to what extent some the stories and news articles and potential outcomes we could see unfold have on the markets in general, and in particular to the secular themes and companies we allocate capital to. What does this or that outcome mean for companies we could allocate our capital to, companies such as Apple, Microsoft, or Walt Disney? What does this or that outcome mean for our longer term growth thesis on the country of India, or the future need for cyber security and infrastructure spending both here at home and globally? We would argue that those companies and secular themes would be relatively unchanged in the long run by much of the potential outcomes in Washington. Political actions can have real ability to impact our assumptions and thinking through real policy decisions, such as the tax cuts south of the border or our pipeline policies and politics closer to home. So all that being said, the plethora of short term noise emanating from Washington, while having the potential to increase market volatility, does not alter our current global economic view in a fundamental way currently. We do not currently see signs of recession over the next 6-9 months, and view the American economy in particular as being on very solid footing for the next year or so. This can be no more evidenced then in the year to date performances of many of the major indices and countries in the world. 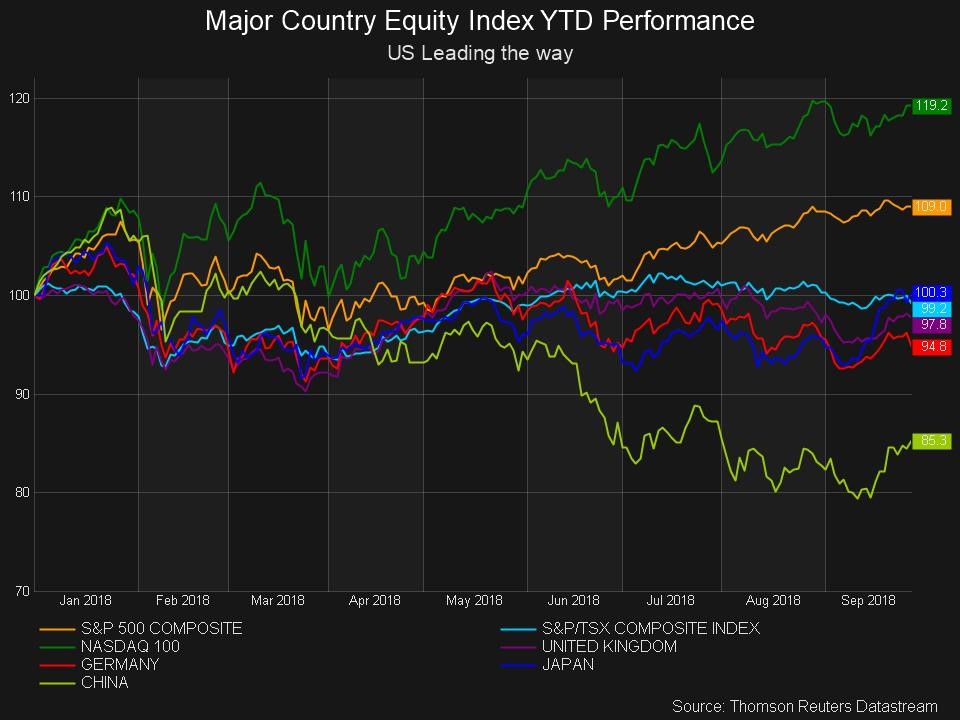 Also, it is worth pointing out that while US technology has been the clear driver of the US outperformance this cycle, this past quarter we saw sectors such as Healthcare and Consumer Services join Technology in leading the strengthening market, signaling some strong depth across multiple sectors in the US. Keep in mind the index performance is shown inclusive of dividends, while the sector returns are measured and shown by price change of the underlying exchange-traded funds (ETFs). 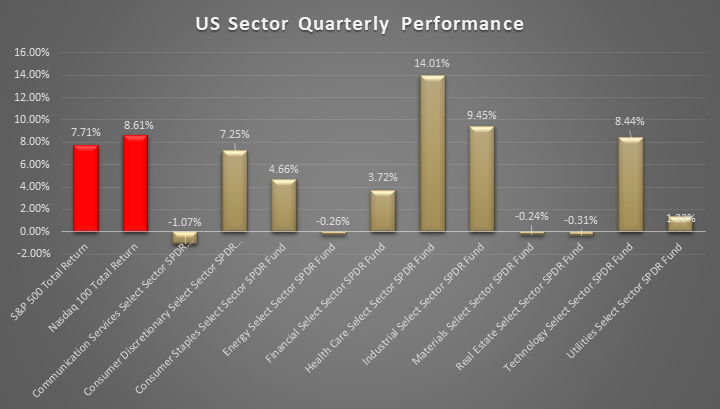 On the Canadian economic side of things, we continue to remain somewhat cautious around Canada and in particular the growth prospects for the economy over the short to medium term. At a conference recently attended by our team in Seattle, much of the conversation around Canada still revolved around how it looked to be tough sledding moving forward from a growth perspective. We continue to look for catalysts for Canadian equities in general but feel that moving forward currently we view Canadian holdings from their capital preservation and income attributes as the main source of investment attraction versus viewing them as growth engines in our portfolio construction process. 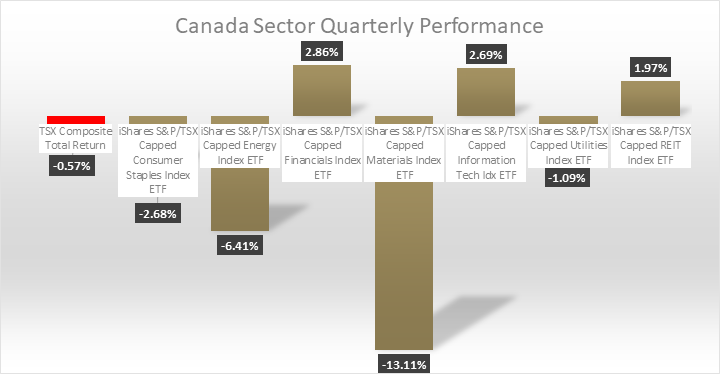 To summarize, we continue to hold the view that we are in the later stages of the current economic cycle, and that is reflected in our relative weights to financials and energy. As we continue to watch for signs of recessionary forces in the US, we will begin to rotate from some of those later stage cyclical sectors into more defensive sectors such as consumer staples, utilities, and telecommunications, while also increasing our longer term government bond exposures.

We continue to research and discuss secular themes and ways to allocate capital to these themes in the most cost and risk effective way possible. Themes and ideas in these area include China, India, cyber security, water, robotics and artificial intelligence, protein, agriculture, and infrastructure. We aim to balance these growth themes with our ultimate goal of preservation of capital and achieving strong returns adjusted for risk.

We continue to be cautious and at the lower end of our fixed-income allocation, as inflation adjusted rates of return in the government and investment grade space continue to look unfavorable, with creeping inflation being one of our larger longer term concerns currently about the global economy, which could have the potential to hurt both fixed income and equities. In the fixed income asset class, we continue to favor shorter term debt that either pays a floating rate of interest or has a short-term maturity that will enable us to has re-invest the maturing capital at projected higher future rates due to the central bank tightening we are seeing in the United States and Canada.

The opinions expressed in this report are the opinions of the author and readers should not assume they reflect the opinions or recommendations of Richardson GMP Limited or its affiliates. Assumptions, opinions and estimates constitute the author’s judgment as of the date of this material and are subject to change without notice. We do not warrant the completeness or accuracy of this material, and it should not be relied upon as such. Before acting on any recommendation, you should consider whether it is suitable for your particular circumstances and, if necessary, seek professional advice. Past performance is not indicative of future results. Richardson GMP Limited is a member of Canadian Investor Protection Fund. Richardson is a trade-mark of James Richardson & Sons, Limited. GMP is a registered trade-mark of GMP Securities L.P. Both used under license by Richardson GMP Limited.