The Who: “Won’t Get Fooled Again!”

In June of 1971 Peter Townshend wrote the song, Won’t Get Fooled Again which promptly reached the top 10 in the UK.  I’m sure you’ve heard it.  Peter programmed human traits into a synthesizer and used it as the main backing instrument throughout the song.  When speaking of the song he said, “Don’t expect to see what you expect to see.  Expect nothing and you might gain everything”.

In my last newsletter (January 2016) I wrote, “Now is not the time to sell everything.  The time for building some cash was around April/May of 2015.”  Since that last newsletter, the U.S. stock markets, such as the S&P 500, have clawed their way higher to regain nearly 96% of their levels in spring 2015.

Do you remember the mood of the markets in January and February of this year?  Many media reports were emphasizing that it was one of the worst starts to a New Year…ever! So, what has changed since February that has caused the markets to move higher? In Europe, Mario Draghi pushed further into negative interest rates and introduced additional measures to try and stimulate the European economy.  Why would he do this if the European economy was healthy?  How long will investors continue to cheer this action without proof that previous stimulus has had any positive effect at all? 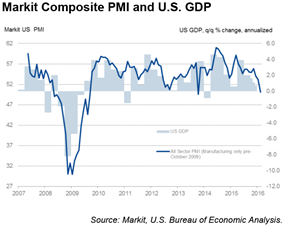 that, “Household spending has been increasing at a

moderate rate, and the housing sector has improved

exports have been soft.”  Many people continue to point

to strong employment numbers within the U.S. as a sign of

strength but this does not recognize that employment is a

lagging indicator.  Employment will typically be one of the

last economic signals to reflect a slowing economy as

employers generally are hesitant to part ways with good

employees.  In contrast to the lagging employment data is the Purchasing Managers Index (PMI) “which serves as a

leading indicator of official economic data.” Historically this indicator has tracked economic growth extremely close (see chart) and the latest data reflected the worst reading since the financial crisis outside of a 2013 reading that was distorted by the U.S. government shutdown.

Like Peter Townshend’s synthesizer, the stock market reflects all human traits. It is a combination of people’s hopes for additional wealth and, at times, their fears.  Those fears may mean the fear of losing money or the fear of missing out on a rally.  These traits cause people to sometimes make irrational decisions such as investing while the fundamentals are deteriorating.

If you missed locking in some gains last spring, you might want to re-visit the decision so that you don’t get fooled again. If you need some help doing that, call me at 519-780-4171, for a clear, independent analysis of your investments.