Uber for kids, Airbnb for your car?… This is the continuing evolution of the so-called ‘sharing economy’

-Would you send your kids to school or soccer practice on their own using an Uber-type driver service?

-Would you rent your car out to total strangers by putting it into a virtual online rental pool?

-What are the larger economic implications of sharing services like a virtual rental pool on the broader economy?

You are likely to be faced with questions like these in the near future.  The ‘sharing economy’ continues to evolve with a number of interesting developments as new start-ups have launched recently that are looking to exploit specific niche markets.

In California, a ride sharing service recently launched called ‘HopSkipDrive’, that caters to the children of busy parents.  The concept is that professional drivers will drive your child to or from school or to whatever after-school activities, on demand or on a set weekly schedule.  The parents/customers pay a premium for this service, as the drivers are more thoroughly screened and trained and their vehicles are subject to more scrutiny than a regular Uber driver or taxi service.  The service also offers the parents the additional peace of mind of allowing them to meet the driver ahead of time and to even do a trial ride with the child in tow.  This allows parents themselves to vet the driver’s friendliness, driving skills and vehicle safety and to allow the child to get to know the driver.  While this is a niche market, it certainly meets a need for busy parents who are likely to pay up for this type of service.  The service can be even more efficient when multiple children are in the same vehicle going to the same activity. 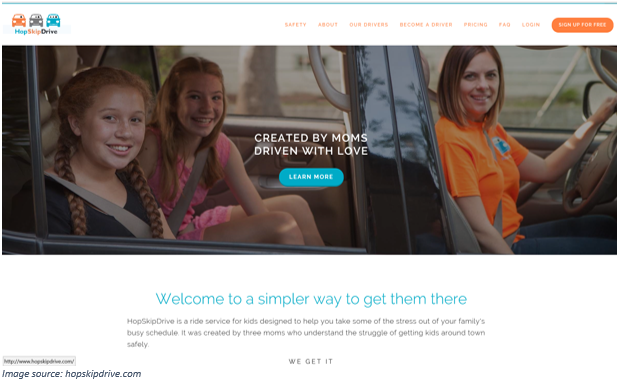 Will we have taxi drivers blocking the streets and protesting the launch of this type of service?

While Uber’s launch in cities around the world has caused controversy, including riots and protests among local taxi drivers, Uber is competing more directly against these traditional taxi fleets.  The service that ‘HopSkipDrive’ offers is not really a competitor to taxis or Uber, as it isn’t particularly common for children to take taxis by themselves.  While I’m sure that most tech savvy pre-teens wouldn’t have any issue using the Uber app to hail a ride on their smartphone, the company actually doesn’t allow their drivers to transport unaccompanied minors.  It is also unlikely that parents and the general public would have much patience for protesting taxi drivers blocking the streets while their children are stuck alone in traffic.

The taxi industry is understandably afraid of Uber’s launch.  Looking at the chart below, the taxi industry in cities like Los Angeles and San Francisco has been demolished by Uber.  In these cities, Uber has nearly 10 times more drivers compared to traditional taxis.  Even in cities like New York, that is known for streets jammed up with a sea of yellow cabs, Uber has grown to a point where there are now more Uber drivers than taxi drivers.  Despite the protests from the taxi industry, the overwhelming popularity of these services among consumers in many jurisdictions has pushed regulators to change the livery laws to allow services like Uber and their competitors to continue to operate and thrive. 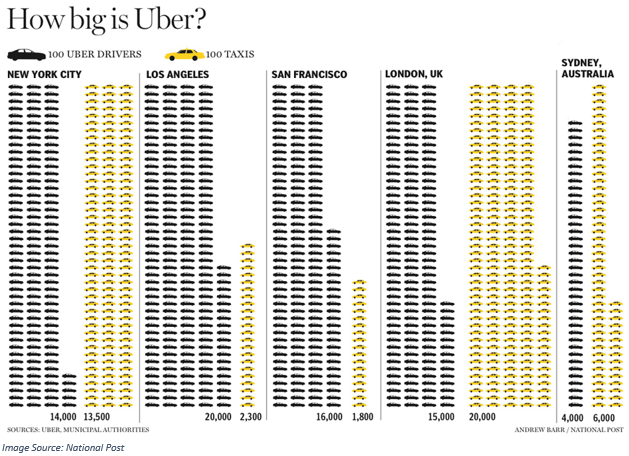 In Calgary, the battle between Uber and the city ended in a stalemate with the city passing new regulations for ‘Transportation Network Companies’ that are stricter than those of other jurisdictions, including Edmonton.  These regulations prevent casual drivers from easily signing up by requiring full commercial driver’s licenses and commercial insurance coverage as well as rigorous vehicle inspections every 50,000km.  While these requirements are all supposed to be in the interest of public safety, services like Uber seem to operate well in other jurisdictions that have much lower requirements for drivers.  Uber’s business model is built around allowing casual drivers to sign up and drive during peak demand times as a secondary source of income.  For example, someone could choose to drive only a few hours per week and pick people up after events like hockey games or concerts when there is higher demand for rides and higher peak fares.  After the laws were passed, Uber declared that Calgary’s regulations were too onerous and refused to re-start the service in the city.  The debate continues to play out with cities trying numerous different regulations and to find a balance between the traditional livery industry and the upstart ride sharing industry. (http://ablawg.ca/2016/03/15/shades-of-grey-in-the-ride-sharing-world/)

The debate on the topic of what actually constitutes ‘ride sharing’ and ‘for hire’ car service has opened a tricky can of worms for regulators to navigate.  Carpools of children going to school, soccer practice or riding together with another parent to a birthday party obviously doesn’t constitute a for hire car sharing service.  Neither should picking up a friend or family member from the airport.  But where is the line actually drawn?  What if you compensate a fellow parent with a gift or Starbucks gift card for driving your child to school? Is this payment for transportation services?  What if you actually pay a friend cash for picking you up at the airport?  Where is the line between a friend or neighbour or stranger giving you a ride?  Or someone that you connect with online or through an app or ‘friend’ on Facebook?  As you can see, the line gets increasingly blurry as you go further down the path and explore various scenarios of what is and isn’t a ‘for hire’ car service.  Take it one step further and ask what if you employ a nanny who drives – would they be breaking the city’s livery laws by driving your child around while being paid to do so?  Are they being paid to watch your child or drive your child or both?

It is likely that a service like ‘HopSkipDrive’ wouldn’t have a problem meeting all of the requirement of the city’s new regulations.  Their drivers are subject to thorough background checks and would have to be more dedicated to a regular schedule.  As long as a driver was willing to pass a commercial driver’s license test and committed to drive enough hours per week to justify additional commercial insurance, they would likely be able to satisfy the city’s requirements.

We may see something like a ‘Hop Skip Drive’ set-up shop and start transporting children around the city and bring the public more familiarity with the convenience that services like this offer.  As services like this creep in, it is likely only a matter of time before other niche markets are found and eventually transportation industry adapts to offer a variety of services for different customer needs.

A functioning competitive marketplace with an array of customer choice?  Isn’t that how most industries should work?

When I was nearly finished writing this blog, the Uber controversy popped up again in Calgary, with Mayor Nenshi finding himself in hot water over the weekend while on a trip to Boston.  Mr. Nenshi hailed a ride in Boston using Uber’s biggest competitor Lyft, and the driver covertly recorded and broadcast the entire conversation from the ride online.  Mr. Nenshi’s private thoughts about Uber and the strategies that the city used to fight against the company were broadcast online for the world to hear.  The Mayor described how the city found registered sex offenders and people with violent criminal records and had them try to sign up as new Uber drivers to test whether they could get through Uber’s background check system.  In the conversation the Mayor stated that essentially all of the criminals got through the background check system, but after the video surfaced he had to apologise and admit that this was an exaggeration and that to the best of his knowledge only one person with an assault charge (but not convicted) made it through.  I wonder how much time and tax-payer money was spent finding the criminals and running this project? (http://calgaryherald.com/news/local-news/nenshi-apologizes-to-uber-ceo-and-for-causing-confusion)

While recording and posting a private conversation on the internet is an obvious violation of individual privacy, anyone in public office should know better than to assume that what they say in public isn’t somehow being recorded.  I’ll leave the city’s ethics commissioner to sort out the details of any specific wrongdoing, but the irony of Calgary’s mayor riding in a Lyft car in a foreign city that has faced taxi driver protests and is still in the process of reviewing their own taxi laws, all while making the case against Uber and its business practices is not lost here.

The main theme is that the sharing economy continues to evolve and find new and interesting ways to share underutilized resources by connecting people with technology to efficiently meet a market need.  A start-up company called Turo recently launched in Canada that allows people to rent out their private vehicles in an online virtual rental pool.  Need a truck for a weekend?  Find one down the street… Visiting a new city? Get a car for less than a rental company’s price and have the owner pick you up at the airport.  Turo navigated the insurance restrictions on allowing individuals to offer their vehicles for rent at the outset and partnered with insurance companies in Alberta, Ontario and Quebec to offer an innovative solution.  The service launched recently and the company is aggressively recruiting individuals to offer their underutilized vehicles on the system.

One statistic on the sharing economy that is often quoted is that Airbnb now has more room listings than many of the largest global hotel chains.  They have accomplished this without owning a single property or investing in any real estate.  Could a company like Turo follow this same playbook as Airbnb and become larger than the major players in the car rental business, all without actually owning any vehicles?   At the time of writing there were only 5 cars available in Calgary for the coming weekend, but this is sure to change as the service only launched a few weeks ago.  It will be interesting watch this company and see how disruptive this trend is.

It is likely that the introduction of services like these in North America and globally is already having an impact on the share prices of rental car companies.  See below for the two year price charts for the Avis Budget group and Hertz Global.  Both of these companies’ stock prices are down more than 50% in the last two years.

Carefully assessing the impact of disruptive trends plays a huge role in developing investment strategies.  Finding the sectors with tailwinds as opposed to headwinds is critical.  While the start-up and disruptors like Turo and Airbnb are most often early-stage private companies that are difficult to invest in directly, half of the battle is realizing what the big picture trends are and avoiding the sectors that are being rapidly disrupted.