Automation, computerization and artificial intelligence are powerful forces that threaten to disrupt employment in many sectors. Sectors that require a depth of knowledge and skill and have traditionally been safe from automation or replacement by robots are now being threatened.

What does this mean for employment trends?

What does this mean for the economy and investing?

How far can robots or automation go in replacing human jobs?

How to invest in an age of massive disruption and rapid technological change?

In mid-2015, the Starwood hotel chain introduced a robotic butler for delivering items to guest rooms such as extra towels, a forgotten toothbrush and any other small item that a guest may need. Starwood isn’t a small boutique hotel and you would likely recognize them from their 11 brands including Westin, Sheraton, St. Regis and Aloft.  With over 1200 hotels worldwide and employing over 180,000 staff, they are one of the top ten largest hotel chains in the world.

While this robot has obvious limitations on what it can do, it is a small step towards the presence of increasing numbers of robots in our lives. A simple task like delivering a towel or forgotten item is relatively simple compared to, for example, delivering and setting out a room service meal or changing the sheets on a bed. 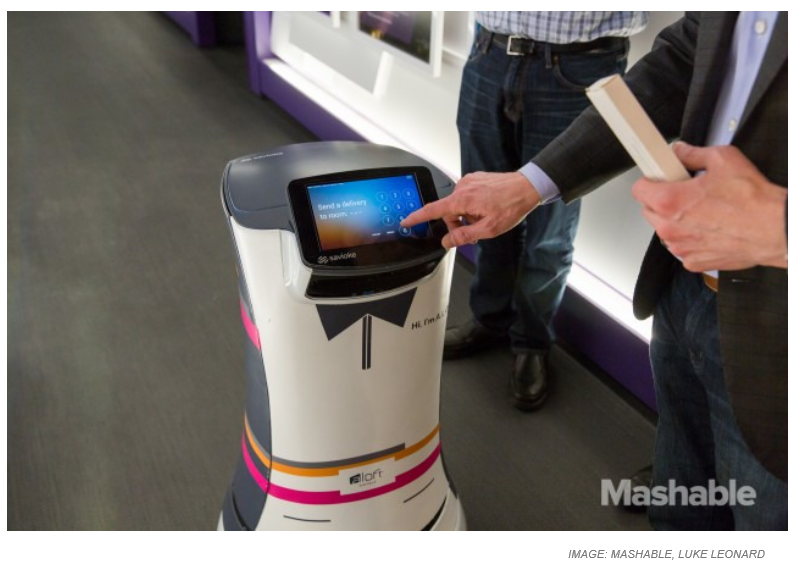 Not to be trumped by their competitor (sorry, couldn’t help but use that word), the Hilton hotel chain recently announced a pilot program in partnership with IBM’s Watson group to test a robotic concierge in their hotels. This is a much more complicated role than a delivery robot, as concierges are traditionally relied upon for their in-depth knowledge of the local area including restaurants, events, shopping, and directions.

On January 14th 2011, IBM’s Watson Artificial Intelligence (AI) program beat the top human Jeopardy contestants, marking an important moment in artificial intelligence development. Since this development, IBM has opened up the Watson program to outside developers to adapt the use of this powerful AI system for other uses.

This robotic hotel concierge may be an interesting novelty and attract guests to the hotel, but it is unlikely that it is much more useful or convenient than simply searching for the information you want on the smartphone that is already in your pocket.  Tickets, restaurant reviews, maps, directions, weather and most types of commonly requested information is already available with a few clicks or a voice command to Apple’s Siri or Google search.

Taking things a step further, a Japanese hotel group recently opened the Henn-Na Hotel (roughly translates to: ‘Weird Hotel’) which is run almost entirely by robots. In this hotel, everything from check-in, luggage handling and the restaurant/cafeteria is automated. To add some fun (or extra creepiness, depending on your perspective) to the experience, the check-in clerk is an animatronic talking dinosaur. The entire check-in process is automated and once completed, a robotic trolley leads you to your room while carrying your luggage. A facial recognition scan allows entry to your high-tech hotel room that features voice controls and other forms of automation.

The youtube link below leads to a short video tour of the hotel and does an entertaining job of describing the experience of spending a night there.  https://youtu.be/mpzIQt6l4xY 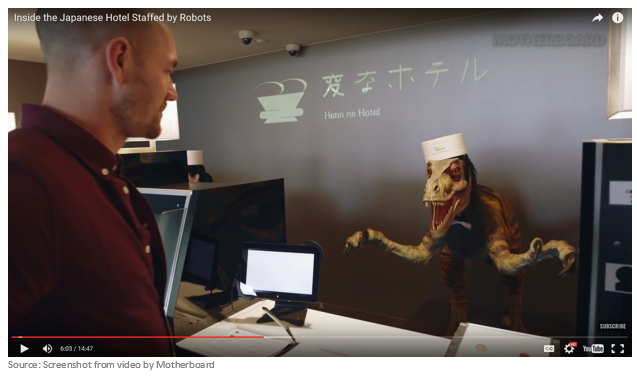 Fully-automated hotels as the norm may seem like the distant future, but we already see many aspects of this trend creeping into our day-to-day lives. Is a robotic check-in clerk at a hotel really any different than a self check-out terminal that we see at most North American grocery stores? In addition, the traditional hotel models is starting to see disruption by AirBNB and other similar players.

While it may seem frightening that robots and computers will eliminate jobs in many sectors, this is a trend that has been going on for decades. To put things in context, roughly 100 years ago the level of employment in the agriculture and manufacturing sectors was around 30% of overall employment in each sector; today it is less than 3% in each sector and could drop further as more automation creeps into these markets. While this would lead one to believe that over 50% of jobs have been eliminated in the past 100 years, we obviously don’t have over 50% unemployment today. What happened to all of these jobs?

As the argument goes, people’s lives have steadily improved since the first simple technological developments. As is the case in the developed world, we no longer suffer the drudgery of plowing fields with oxen, walking to the village well to get water and other time consuming and labour-intensive tasks. In roughly the same time period the average number of hours worked by people around the world has fallen by half while people’s lifespans have roughly doubled. While some people may still choose to work 80-hour weeks, most people now work something more in-line with a 40 or 50-hour week and have a balance between work and leisure time. In the past, an 80-hour week working the fields was a necessity for survival. Today those working this type of schedule is more a luxury of lawyers and investment banker types choosing to live this lifestyle.

Will the trend of automation continue to improve people’s lives or will it reach a point where automation causes massive unemployment?

This question has been debated since the industrial revolution. While certain sectors get disrupted, new jobs are created to replace them. Innovation is inevitable and people need to be able to adapt to change.

Self-driving cars and trucks will soon hit the market and be more efficient and safe than their human driven counterparts. Recent surveys of people’s perceptions of self driving cars is still mixed with many respondents indicating that they wouldn’t trust a self-driving car. I wonder if the same people who have reservations about riding in a self-driving car would fly in a commercial airplane without a second thought?  Airplanes obviously still have pilots onboard, but for about 99% of a given commercial flight the pilots are simply overseeing the autopilot as the airplane flies itself between destinations. Modern autopilot systems can even take-off and land in foggy conditions and basically fly the entire route on their own.

Human drivers cause hundreds of thousands of traffic accidents every year resulting in approximately 40,000 deaths per year in the United States. Do self-driving cars or trucks need to be perfect and never cause a single accident or simply better than human drivers? Even with today’s technology, a car with adaptive cruise control can react to an oncoming hazard and apply the brakes faster than a human driver can even react and move their foot towards the brake pedal. What will replace the jobs of millions of truck drivers that are currently employed around the world if self driving trucks become commonplace and do a better and safer job?

How to invest in an age of massive disruption and rapid technological change?

Our process involves looking for companies with undeniable tailwinds for the foreseeable future as well as companies that are essentially ‘undisruptable’ by new technology. A good example of a company with an undeniable tailwind is Google (now called Alphabet). This company is dominant in internet search and advertising and they are benefitting from the simple fact their market is growing as the reach of smartphones and high-speed internet access spread around the world. Eventually it will reach a point where basically everyone on the planet who chooses to, will have access to an inexpensive smartphone with high-speed internet access. Alphabet is even investing in infrastructure like high-altitude balloons and solar-powered drones that will provide internet access to remote areas and parts of the developing world.  While this may seem like an altruistic goal, they will likely succeed in growing their own market, which in turn results in more Google searches.

Compliance regulations dictate that this blog isn’t the forum to make specific investment calls. This example is used to show the characteristics of a company with a strong tailwind. Making a decision to buy Alphabet stock will depend on your own investment goals and risk tolerances and where the stock is currently trading.

Companies with tailwinds require constant monitoring, as market leadership today may change with a failed product or as a nimbler competitor comes along.  Alphabet may have what seems like an insurmountable market position in internet search and advertising today, but this may not always be the case. A telling example of a technology company that squandered their market lead in a growing industry is Blackberry. Blackberry once held over 50% share in the North American smartphone market; today they are a niche player with around 1% share.

Companies in the ‘undisruptable’ category would qualify if their industry fulfills a basic need that can’t be displaced by new technology. Examples in this area are food, real estate and some media companies with proprietary content. While trends in diet and nutrition change over time, people’s need for basic food items is unlikely to change.  Housing, office and certain types of retail space are also less likely to diminish in need over the long term, especially in mature and non-cyclical markets.

A specific example of a media company with a strong content library is Disney.  While Disney’s stock price has been hit recently by the effect of ‘cord cutting’ as fewer people are paying for their ESPN live sports package, their library of media content is basically an irreplaceable competitive advantage.  In addition to the traditional Disney content (Mickey Mouse, Sleeping Beauty, Little Mermaid etc) they now own Pixar, Marvel and Star Wars and have the ability to continually create and re-create new feature films and TV shows based on this library. Creating knock-offs of this type of proprietary media content that people will pay to watch is nearly impossible, not to mention the copyright and legal battle that would ensue.

There is obviously a lot more that goes into making investment decisions, but it does help to use a framework like this to identify the underlying themes and trends. We find that it is generally much easier to sail downwind on a steady course, than to fight against the trends and battle the storms of volatility.