Just before Christmas, on December 22nd, 2015 the private company SpaceX vertically landed its Falcon 9 rocket on a landing pad after delivering its payload of 11 communication satellites to orbit.  Two things stand out as remarkable feats from this accomplishment.  The first is the fact that a private space company was able to launch a re-usable rocket to orbit and land it safely back to earth and the second is the fact that 11 individual communications satellites were launched in one payload.  Examples of innovation and progress in areas like this recent rocket launch are striking examples of how technology is significantly driving down the cost of nearly everything.

One of SpaceX’s stated objectives is to achieve an all-in launch cost of around $USD 60 million with a re-usable rocket and in the next few years to take astronauts to the International Space Station and back.  This may still sound like a large sum of money, however, it is actually a fraction of the cost of other launch programs that were run in the past.  While specific numbers are difficult to find, it is estimated that each Space Shuttle launch cost between $USD 300 to 500 million when the program was running.  The Russians are particularly concerned as they have been unseated as the low-cost provider of launch services by a wide margin.  Since the retirement of the Space Shuttle, they had the only rocket technology that was powerful enough to take humans to the International Space Station, though with decades old Soyuz technology.

NASA’s Space Shuttle was somewhat re-usable, however, the main shuttle did require significant refurbishment between launches and large parts the launch system burned up in the atmosphere after they detached from the main shuttle and fell back to earth during a launch.  As opposed to the Space Shuttle that looks more or less like an airplane and would glide down to land on a runway, the Falcon 9 is a rocket that lands vertically.  The video of the recent landing is amazing to watch, as it simply looks like a rocket being launched with the video played in reverse. 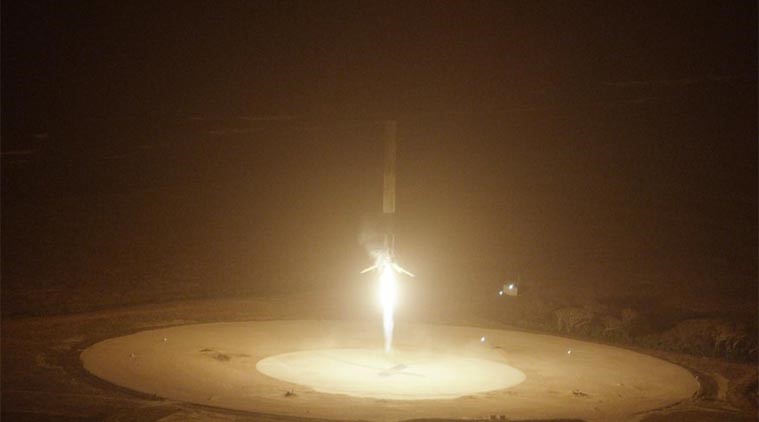 A short clip of the landing is available

I’m not sure what your dexterity is like, but I can barely balance a pencil on the end of my finger for more than a second.  Landing a 20 story tall rocket with over 1.5 million pounds of thrust coming out of the bottom and parking it gracefully on earth, without it tipping over or crashing is a remarkable feat of engineering and control systems.  This rocket is now being examined for signs of damage from the launch and re-entry, but the company’s eventual goal is to be able to re-launch the same rocket within a few weeks, with only minor maintenance checks and refilling the fuel tanks.

The second impressive feat from this launch was the fact that the rocket delivered 11 satellites to orbit in one payload.  The satellites were launched for a private company called Orbcomm which offers services for communication and tracking of equipment like ships, trucks and rail cars.  In the past, a single communications satellite would take up the entire payload bay of the Space Shuttle or other launch system.  The Orbcomm satellites are obviously much smaller, but with the advent of much smaller and more efficient electronics, they are undoubtedly much more capable than the communications satellites that were launched decades ago.  Launching 11 satellites at once, means that the per satellite cost is further reduced by an order of magnitude.  On a per satellite basis, this launch cost about 1/100th of what a similar launch would have cost decades ago.

The launch also prompted some interesting social media taunting between the two technology moguls involved in two of the competing space companies.  Jeff Bezos of Amazon fame turned to his twitter followers to offer some back-handed congratulations to Elon Musk, the CEO of SpaceX (and Tesla).  Bezos’ rocket company, called Blue Origin, had accomplished a similar landing with their smaller rocket a month earlier and drew similar taunts from Musk. 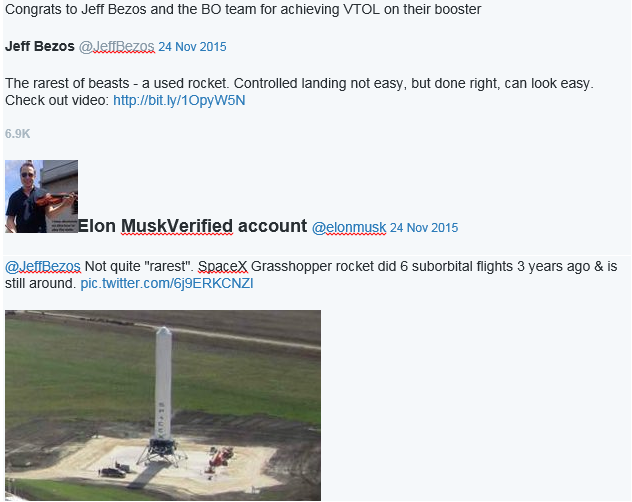 While Blue Origin’s ‘Shepard’ rocket is much smaller, less powerful and achieved a lower altitude than SpaceX’s ‘Falcon 9’, the fact that two private companies achieved basically the same feat of landing a reusable rocket within a month of each other likely marks a new era of lower cost space exploration and rocket technology.  On the surface, the rivalry between Bezos and Musk may appear to be simply two tech moguls taunting each other’s egos and makes for some humorous headlines.  However, digging deeper into the plans for each of their companies, they appear to be building profitable businesses in an area that was traditionally funded directly by the resources and taxes of national governments.

Other players are involved in different aspects of this new space race.  Richard Branson’s Virgin Galactic is scheduled to take passengers on a short space flight in a couple of years once their rocket/aircraft system is further developed and approved by flight regulators.  They are offering the luxury to fly up to 100km altitude (the technical definition of reaching outer space) and experience a few minutes of weightlessness as the craft completes a parabolic trajectory and glides back down.  On paper the passengers will technically breach the outer part of the atmosphere, however it isn’t truly an orbital flight for any extended period of time.  The tickets for these flights cost $USD 250,000 per person and it may seem frivolous to some to pay this much to achieve what is only technically space flight and a few minutes of weightlessness.  However, hundreds of people have signed-up and paid their deposits to be among the first commercial space passengers.  (For me, riding the 7th largest roller coaster in the world – ‘Leviathan’ - at Canada’s Wonderland in Toronto this past summer and experiencing an 80 degree drop for 300 feet and a series of parabolic arcs for the $50 park admission fee was plenty of excitement and weightlessness).  On a recent trip to London England, I passed by the Virgin Galactic storefront and snapped the photo below.  Regrettably, it was early on a Sunday morning and the shop was closed, as I was quite interested to go in and at least hear the sales pitch. 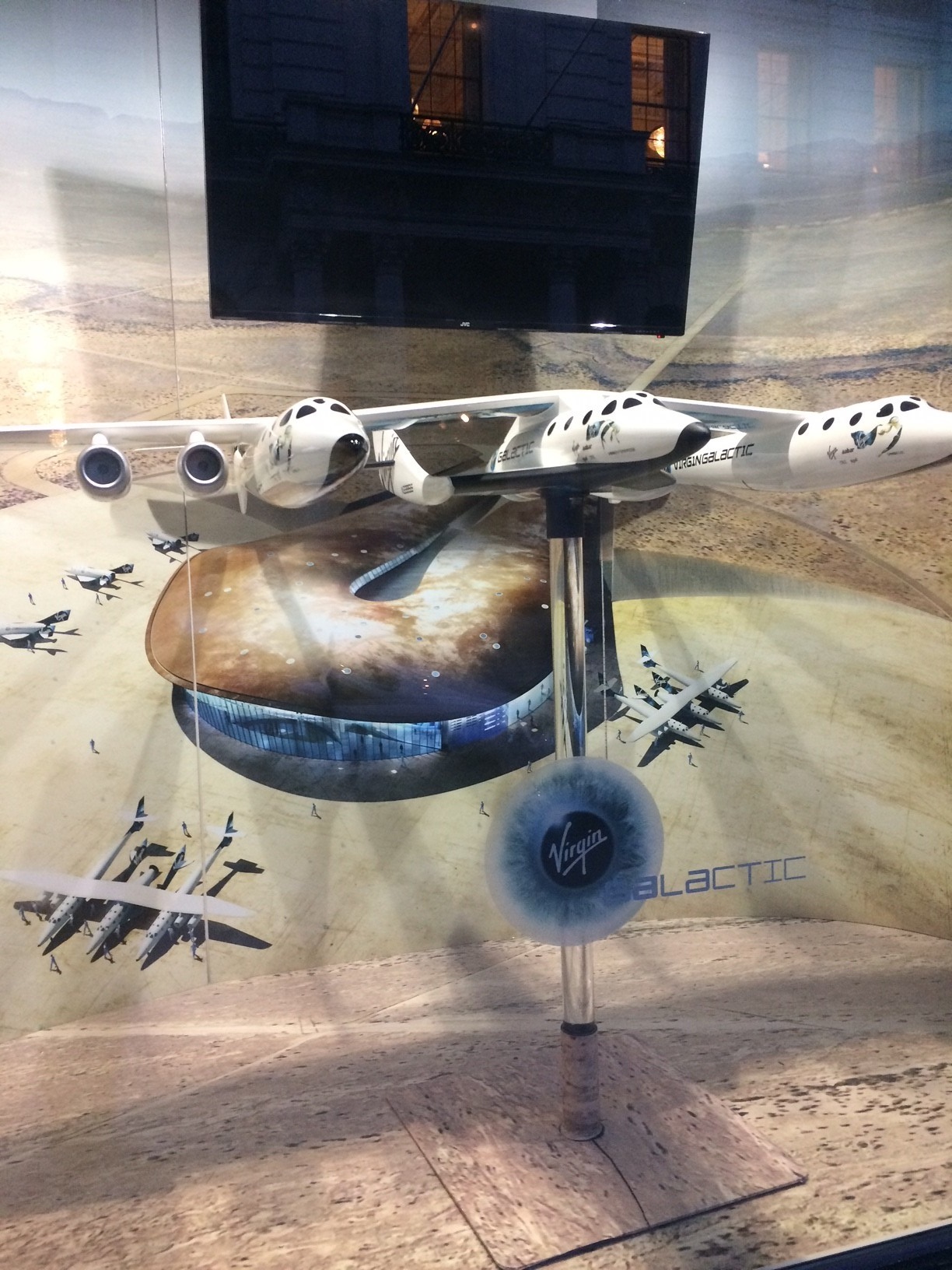 One other company that is involved in a commercial aspect of space exploration is called Planetary Resources.  This company is looking to send small robotic crafts into orbit to mine valuable metals from asteroids that are within reach.  The company plans to pulverize the high grade ore from the asteroids and turn it into chunks of a foam-like metal compound that can float back to the surface of the earth without burning up in the atmosphere.  While this concept may sound like total science fiction, comparing it to the multi-billion dollar costs of some of the mining mega-projects that have been built on the earth’s surface, it actually doesn’t sound that far-fetched. Asteroids are known to hold very high-grade metals and the company claims that a single 500 metre-wide asteroid could contain more platinum and related metals than have ever been mined on the surface of the earth.  Considering that many mining companies are mining very low-grade ore and need to move millions of tonnes of dirt and create massive craters in the earth in the process, perhaps doing this all of this in outer space makes a lot of sense.   Putting things in perspective, a single 400 tonne mining truck for a large open pit mine costs roughly $USD 5 million, which is in the same range as the per satellite launch cost of one of Orbcomm’s satellites.  Launching small mining robots into outer space doesn’t actually seem implausible and we will likely see this company or one of their competitors succeed in the next few decades. 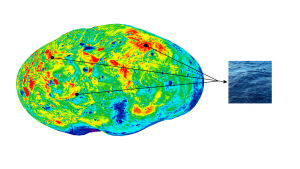 The development and implementation of technology has put massive deflationary forces on the prices of commodities of all types.  Years ago, the world was ‘running out of oil’ while today the reality is that technology has unlocked nearly limitless supplies of oil and natural gas at various price points.  (I’m sure that many Albertans wish that we were actually running out of oil and prices for oil and natural gas were a bit higher at the moment.)  Canadian ingenuity has been part of the problem.  Hydraulic fracturing technology (or ‘Fracking’ as it is now known and commonly spelled) was perfected to a large part in Western Canada and began as a way to stimulate an unproductive vertical well bore with a single ‘frac’.  Today, companies like Calgary-based Packers Plus are able to perform 100-stage ‘fracs’ in a horizontal well that can stretch a several kilometers underground.  The result is wells that have prolific output that is multiples higher than what was achieved using conventional technology.  While this technology is proven in many basins in North America, it is only in the early stages of deployment in other parts of the world, where it will undoubtedly work just as well.

Looking at this type of innovation everywhere in the global economy and the significant cost reductions that it drives, it is hard to point to any areas of inflation.  Fuel and raw materials are now cheaper, which drives down the input, transportation, and production costs of nearly every product that people consume, from food to steel to clothing and electronics.  Central banks around the world have stated inflation goals in the 2% per year range.  The fact that technology is driving down the cost of extracting fuels, materials and commodities as well as making their consumption much more efficient (LED lighting, hybrid vehicles etc.), makes creating an economic environment with any kind of inflation a difficult challenge for those in charge of monetary policy.

These deflationary pressures are having a profound disruptive impact on the world of investing.  Interest rates are likely to remain very low or and have even turned negative in some jurisdictions as central banks work to stimulate economic growth and inflation.  The energy and commodity weighted Canadian stock market is now at roughly the same point it was ten years ago.  Investors clearly need to look for other areas of growth that are less subject to deflationary pressures.