The end of Uber in Calgary… at least for now

The ink was barely dry on my last blog before the service was shut down in Calgary on November 21st by a provincial court order. The city of Calgary pushed for the shutdown to allow council more time to review Calgary’s taxi bylaws. The delay only seems to be postponing the inevitable introduction of the service, but for now Calgarians will have to wait until at least February, when the city’s review deadline has passed, before they can hail another Uber ride.

The pushback from city councilors makes Calgary seem like a backwater that is clinging to a ‘buggy whip’ type regulatory system compared to other cities around the world such as New York, San Francisco and Los Angeles, where the service has been operating successfully alongside the taxi industry for years. It shows a strong reluctance to adapt to allow new services that are more convenient and better for consumers, for the sake of protecting the status quo in the taxi industry that hasn’t faced competition or any significant changes to its regulations for decades.

Based on their public comments, some city Councilors seem to be missing the point entirely. Councilor Ray Jones was quoted in the Calgary Herald saying:

“It’s annoying that somebody can come in and tell you how to run your own business when the business has been running fine. All we have to do is add more (taxi) plates.”

I am curious to know if Councillor Jones has ever tried Uber firsthand in another city. Perhaps the taxi service in Calgary is ‘fine’, but could it not be better? The Yellowpages were a ‘fine’ way to look-up a business, before we had the internet. Rail travel was a ‘fine’ way to cross the country, about 100 years ago. Candles worked ‘fine’ for illumination, but electric lights are much brighter and safer. We now have LED lights, which are an even further improvement in power consumption and longevity (incidentally, the city of Calgary is busy replacing our streetlights with LED bulbs). Why should a government cling to a dated regulatory system, when a better alternative exists? The argument that we should settle for a product or service is ‘fine’ doesn’t hold much weight in an era of rapid technologically driven improvement. 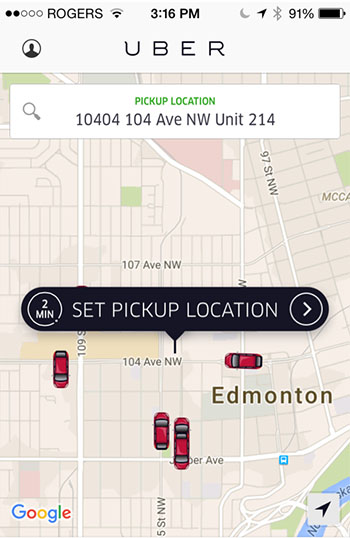 Uber allows users much more choice and control over their experience. Hailing a ride with Uber gives the user much easier access to a ride, a fare estimate ahead of time, a precise time when the car will arrive, and more certainty that the car will be clean and the driver will be friendly. The traditional taxi industry, under its current form of regulation, has little incentive to improve or provide a level of service that is anything above and beyond basic transportation.

Calgary’s mayor, Naheed Nenshi’s argument against the introduction of the service is based on the concern that Uber doesn’t currently have the appropriate insurance in place to operate in this city. The argument is a bit puzzling as the service continues to operate in Alberta’s capital of Edmonton under the same provincial insurance system. (Checking my Uber app as I write this blog, I note that the service is still operating in Edmonton with a number cars available in the downtown streets within a 2 minute pickup time.)

The argument seems a bit unfounded generally, as Uber is a company with global operations and has insurance policies in place that cover their drivers in cities all over the world. What is so special about the insurance required to operate in Calgary? Uber covers drivers while they are driving for Uber under a blanket corporate policy that seems to work everywhere else that they operate. By the law of large numbers, Uber drivers in other jurisdictions have undoubtedly been in accidents and been covered by Uber’s insurance without issue. The company would face huge reputational risk and backlash from drivers and passengers alike, if they didn’t honour any insurance claims or stand behind their drivers and passengers in the event of a bad accident.

A voice of reason has come from the Canadian Federal Government’s Competition Bureau in a statement discussing the issue released November 25th 2015. Quoting their report directly:

“The Competition Bureau is of the view that these innovative business models have the potential to offer important benefits to consumers through more competition, including lower prices, greater convenience and better service quality for a variety of reasons.”

Their statement basically urges municipalities to get with the times and to allow more competition and innovation into the protected taxi market for the benefit of consumers. Their recommendation is very clear in addressing the shutdown of these services in Canadian cities such as Calgary:

“The Bureau believes municipalities should consider whether prohibitions on digital dispatch services and ridesharing applications are necessary and explore whether less restrictive regulations could adequately address their concerns.”

The Competition Bureau also provided input to a review of the Toronto taxi system in early 2014 in a separate report. This report noted that no new taxi plates had been issued in Toronto since 2005 and that prices for a taxi plate were valued between $300,000 to $400,000 dollars. I’m not an expert in the economics of the livery industry, but this does seem like an exorbitant price to pay for the privilege of driving passengers in any city. It is roughly 10x the cost of a Toyota Prius, one of the most common taxi fleet vehicles. One has to wonder how much money is left over to maintain the vehicle or pay the driver, after the cost of financing the taxi plate is factored in. In theory, one of the only barriers to entering an unregulated market would be the cost of the vehicle. It is apparent that consumers are paying for these highly valued taxi plates through higher taxi fares, as the plate owner would need significantly higher rates to generate an economic return on cost of the plate on top of fuel, insurance, driver pay and other vehicle costs that go along with operating a vehicle.

The Competition Bureau’s 2014 report to the city of Toronto also notes that taxis services are disproportionality more important to lower-income groups of the population than to higher groups. To quote their report directly:

“Taxis are important to certain segments of the population. Studies consistently show that particular groups that depend on door-to-door transportation, such as seniors, stay at home parents and the disabled, each account for a much higher share of taxi trips than their population share. In general, low-income groups are disproportionately higher users of taxi services than upper income groups. We respectfully suggest that inflated taxi fares decrease the amount of taxi service available to these members of the Toronto public.”

One of the concerns to introducing new taxi plates into the market is that drivers fear that their earnings will be diluted as they compete with new drivers entering the system. Uber has studied the effect of their entry into various markets and they use New York as an example on their website in an article titled ‘Four Septembers of UberX in NYC’. (Uber is providing all of the data in this example, so they are obviously putting a positive spin on the article in their favour, but it is an interesting study regardless of the source.) In New York, the number of drivers in the Uber system nearly doubled from 2014 to 2015, while the average hourly earnings for their drivers actually went up as well. This may seem counterintuitive, as one would think that adding double the number of cars available for roughly the same population would lead to drivers collecting half as many fares as they compete with each other. The reality is that as more drivers are available in the system, more people use the system and the entire market for paid fares grows. The chart below shows the growth of an Uber driver’s average hourly pay from September 2012 to September 2015. 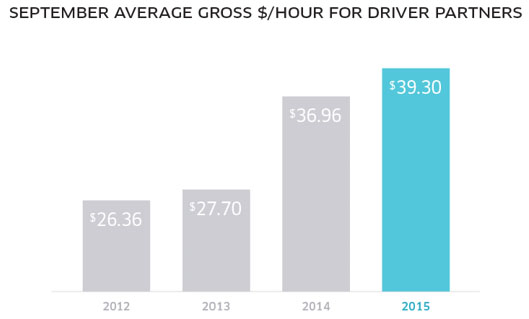 Anecdotally, I had a colleague in Toronto send me a note after he read my prior blog on the topic and tell me that he has recently been able to sell his car and go without it. He now uses Uber almost exclusively as a way to get around the city and finds it cheaper and more convenient than driving, insuring, parking and maintaining his own vehicle.

Changing a system where one group has paid tens or hundreds of thousands of dollars for a taxi plate and another group has paid nothing to enter the market is a difficult problem. Some new policies to level the playing field should be introduced, so that neither traditional taxi drivers nor drivers for Uber or other similar digital dispatch services are faced with prohibitive costs to access the market. In the end, consumers end up paying when a market is too highly regulated or too costly to enter. An efficient system to address standard licensing and vehicle safety requirements should also be implemented. While there will likely be a period of adjustment, there are dozens of other cities around the world that have managed through this type of adjustment that can serve as examples of how best to adapt the market to a new reality. As the Competition Bureau notes in their report:

I am optimistic that Calgary’s city council will thoroughly review the issues at hand, and find a more balanced approach to allow competition and innovation in our local taxi and transportation markets.

The Calgary Herald’s coverage of the story is available at the links below:

A link to the full recommendation from the Competition Bureau and their recommendations to the City of Toronto are available at the website links below:

The newsroom on Uber’s website is the source of the data and article ‘Four Septembers of UberX in NYC’:

The opinions expressed in this report are the opinions of the author and readers should not assume they reflect the opinions or recommendations of Richardson GMP Limited or its affiliates. Assumptions, opinions and estimates constitute the author's judgment as of the date of this material and are subject to change without notice. We do not warrant the completeness or accuracy of this material, and it should not be relied upon as such. Before acting on any recommendation, you should consider whether it is suitable for your particular circumstances and, if necessary, seek professional advice. Past performance is not indicative of future results. The comments contained herein are general in nature and are not intended to be, nor should be construed to be, legal or tax advice to any particular individual. Accordingly, individuals should consult their own legal or tax advisors for advice with respect to the tax consequences to them, having regard to their own particular circumstances. Insurance services are offered through Richardson GMP Insurance Services Limited in BC, AB, SK, MB, NWT, ON, QC, NB, NS, PEI and NL. Additional administrative support and policy management are provided by PPI Partners. Richardson GMP Limited is a member of Canadian Investor Protection Fund. Richardson is a trade-mark of James Richardson & Sons, Limited. GMP is a registered trade-mark of GMP Securities L.P. Both used under license by Richardson GMP Limited.