Electric cars part 2 - How to solve the ‘Chicken or Egg’ problem?

The fine print disclaimer that almost nobody reads, but my firm makes me put at the end of my blogs will explain that nothing in the blog should be taken as specific investment advice. Because this particular blog discusses one specific publicly traded company, I feel that I should come right out and say it at the beginning. Tesla Motors is a fascinating company with very ambitious goals. It trades at a lofty valuation compared to other auto manufacturers, but it is also doing a lot of things differently from other manufacturers. Is Tesla a good investment at the moment? I can’t tell you. I’ll let you do your own investment research and decide for yourself.

Electric cars face an uphill battle in adoption, as the incumbent technology of combustion engines and retail locations to buy fuels are already in place, and generally in the most convenient locations for motorists. Who wants to buy an electric car when there is nowhere to charge it up? Who wants to build electric charging stations when there are hardly any electric cars on the road? I describe this as a ‘Chicken or Egg’ type of problem – So what comes first? Tesla’s answer is to build both at once.

This blog will take a look at Tesla’s strategy to build out a network of ‘Supercharger’ stations across North America, Europe, and Asia, while simultaneously starting a car company from scratch and facing off against competitors in the automobile industry with much deeper pockets. It is an aggressive and ambitious strategy, but they appear to be pulling it off. I even paid a visit to what is, at the moment, the northernmost Tesla ‘Supercharger’ station in North America to research this blog. This trip was not as remote or romantic as it may sound. This ‘Supercharger’ station is located in the parking lot of a Sheraton hotel in Red Deer, Alberta just off the highway that runs between Calgary and Edmonton. (Photo: The Tesla Supercharger station in Red Deer, Alberta)

The upcoming generation of electric and plug-in hybrid vehicles has the promise to address some of the major drawbacks of owning an electric vehicle that plagued prior generations. Historically, electric vehicles had limited range, basically nowhere to charge them except at home, and the overall performance was generally poor compared to a combustion vehicle at the same price point.

An average gasoline powered car will get about 500km-800km on a tank of fuel, and finding a place to fill-up in either the city or on the highway is almost never an issue. One of the only electric vehicles of the 1990’s with any type of commercial production was GM’s EV1 that offered about 200km in range with their extended battery pack option. This would make a weekend outing from Calgary to Lake Louise (about 180km each way) a dicey proposition, as you would worry about getting stuck in traffic, have no ability to make any detours, side trips or change your route, and have the hassle of finding somewhere to fully re-charge before returning home. Almost making it to your final destination is not a particularly good option, and no one, other than you, will be cheering your arrival if you do just make it before your batteries are spent. No one wants to be stuck at the side of the road waiting for a tow truck with a dead vehicle of any kind.

Tesla’s Model S sedan claims to offer a range of 385km-430km (240-270 miles) depending on the battery pack and model selected. This is clearly a more practical range than the prior generation of electric cars and is approaching the range of a gasoline powered car between fills. Electric car owners also have the convenience of charging their vehicles overnight at home and always having a full charge before they head out, making the slightly lower range between charges or fills less of an issue.

But where can you charge an electric car when you are travelling between major cities?

Tesla has also addressed the issue of charging on longer trips between cities by building out their own network of charging stations. The map below, from the Tesla website, shows that you can drive from coast to coast and nearly anywhere in between in the U.S. lower 48 states if you plan your route to charge up at their charging stations along the way. Looking at the map, you can see that you can now drive from Calgary to Vancouver with five places to charge along the way using Tesla’s ‘Supercharger’ stations. You would have to plan your route more carefully and make sure that you hit enough stops, but it can be done. Personally, I might not choose to cross through the Rocky Mountains in an all-electric car in the dead of winter, but perhaps it is no more risky than doing the same trip in a regular gasoline powered car.

Figure 1: A map of the current network of Tesla Supercharger stations in North America 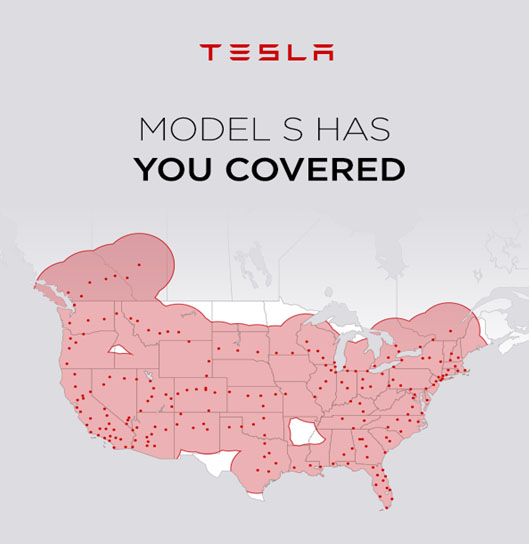 The navigation system in all Tesla vehicles is continually updated with the location of every charging station and has the capability to calculate a route for you that incorporates stops for charging along the way. They also provide owners with a smartphone app that will tell the owner when the vehicle is done charging, so they can leave their vehicle at the charging station and go do other things. Tesla estimates that at one of their Supercharger stations their vehicles can be charged from nearly empty to 80% charged in 30-40 minutes. While this is obviously a lot longer than the five minutes it might take someone to fill their car up with gasoline, taking a 30 minute break after every 3-4 hours of highway driving probably isn’t a bad idea.

Tesla also offers the electricity used to charge their vehicles for free to Tesla owners at their charging stations. I’m not exactly sure how they make the economics work to offer this to their customers as a perk and still make money as a company, but it sounds like a pretty good deal if you can take advantage of it. I don’t hear of any other car companies offering free gasoline for life with the purchase of one of their vehicles. There are also a number of retail stores like Whole Foods in the U.S., for example, that offer preferred parking and electric vehicle charging to owners of electric cars. In this case, I can see how they could make money offering this service, because as a condition of charging their vehicle, the customer also goes into the store to buy things, so the retailer would make it back on the grocery or product sales. It appears that, for Tesla, the network of ‘Supercharger’ stations is simply a loss leader with the goal of breaking down the consumer hesitation to owning an electric car. 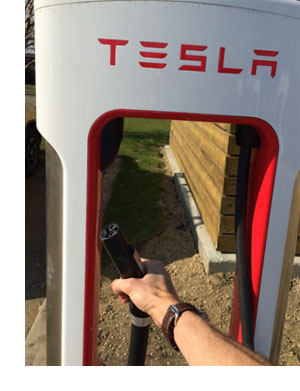 The map uses a 280 km or 175 mile radius for their network coverage. The Tesla Model S has a claimed range of 385 km or 240 miles for the base model. A range estimate should incorporate some common situations like traffic delays, stop and go driving, and using things like Air Conditioning and other factors that will reduce the overall range, so the radius they project doesn’t seem unrealistic. This map shows their network today, and they definitely haven’t stopped building new stations. (Photo: A Tesla Supercharger stand and charging cable – unfortunately it wasn’t much use for filling up my gasoline powered Honda)

The Tesla charging network has grown dramatically over the past few years to the point where virtually the entire U.S. and Canadian population is within range, as well as northern and western Europe. Over the next 12 months, all of Europe and North America (excluding northern Alaska) will be covered, as well as China (apart from low population areas far inland), the Japan main islands and southern Australia.

Depending on where you live, powering your car on electricity, even if you are paying for it from your home power connection, is about a fifth the cost of filling up a similar sized car with gasoline or diesel. Tesla uses an example of a jurisdiction with $0.12 kw/h for electricity and gasoline at $3.90 per gallon (approximately $1 per litre) to come up with this estimate. In Alberta, I can lock in my residential power for $0.07 for the next 5 years and I pay about $1 per litre for gasoline at the moment, so I would likely save even more by driving an electric car.

Electric car owners also have the advantage of being able to charge their vehicle at home and always have a full charge. While this option isn’t free, this would mean never having to stop at any fuelling station and would likely be more convenient than having to stop for gas once every week or two. Even if the current network of electric charging stations on the highways across North America seems sparse, as a second vehicle in a two vehicle household, an electric car could make a lot of sense for city driving. 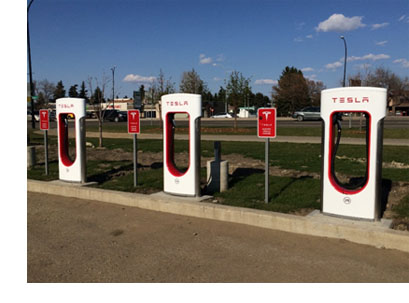 If you do a lot of highway driving and you find situations where there might not be enough range for an electric car to be a practical vehicle for your own lifestyle, we have to always remember the inevitable improvement of technology. The batteries in today’s Tesla Model S have about 30% more capacity and range than when their first model came out in 2008. This trend will obviously continue, and as the battery technology is continuously being developed it will only get better. What will things look like a few years in the future, when there are two or three times as many places to charge-up and the range of electric cars is even better? (Photo: The newly constructed Tesla Charging station in Red Deer - They haven't even filled in the sod yet)

This material is provided for general information and is not to be construed as an offer or solicitation for the sale or purchase of securities. Neither the author or Richardson GMP Limited makes any representation or warranty, expressed or implied, in respect thereof, or takes any responsibility for any errors or omissions which may be contained herein or accepts any liability whatsoever for reliance on this report or its contents. Richardson GMP Limited, Member Canadian Investor Protection Fund. Richardson is a trade-mark of James Richardson & Sons, Limited. GMP is a registered trade-mark of GMP Securities L.P. Both used under license by Richardson GMP Limited.