Welcome to a multi-part blog series on electric and plug-in electric hybrid vehicles. As I began to write this blog, I quickly realized that I could easily span two or three blog posts or even a few books if I really got into the subject. I will begin with a brief history of electric cars, followed by a look at the coming line-up of plug-in hybrids, and finally a look at the introduction and possible future for fully electric cars like the Tesla line-up.

There is a certain allure of having a vehicle that uses no gasoline and runs quietly and efficiently on electric power. The thoughts of breaking free from having to go to gas stations, saving money, and helping reduce the overall impact on the environment are all appealing aspects to electric cars. While it is a nice concept to think that there are ‘zero emissions’ that come from running an electric vehicle, we can’t forget that the electricity used to run it has to come from somewhere.

Living in Alberta, a province that generates over 50% of its electricity from coal power and another roughly 40% from natural gas, it is a stretch to think that running an electric vehicle on the power grid here would really generate ‘zero emissions’. Alberta is certainly a hydrocarbon/coal intensive jurisdiction, but even broadly across the United States the energy mix is around 40% coal and 28% natural gas, with nuclear, hydro and renewables making up the balance. Not to get too technical into the numbers but, on average, only 1/3 of the electricity generated on this continent is from ‘zero emissions’ sources. This third of power generated also doesn’t include the energy input relating to manufacturing solar panels or wind turbines, or mining and processing uranium for nuclear power.

I will leave this analysis aside for the moment, as I could get into a never ending debate on whether or not running an electric vehicle on the grid or just driving a reasonably efficient gasoline powered car is actually better for the environment or produces fewer emissions overall. The fact of the matter is, as there is no significant amount of grid power generated on this continent from oil or refined products, that running an electric vehicle in North America would directly displace the consumption of gasoline or diesel in favour of whatever mix of power is used to run your local electric grid. Diesel generators are used in sparsely populated or remote areas like the far north, but their overall use is miniscule in terms of power generation on this continent. Therefore, wide adoption of electric vehicles does create the potential for a disruptive change in the patterns of fuel consumption and energy consumption in general.

But when will this happen? Haven’t electric cars been around for decades with limited commercial success?

Let’s start at the beginning 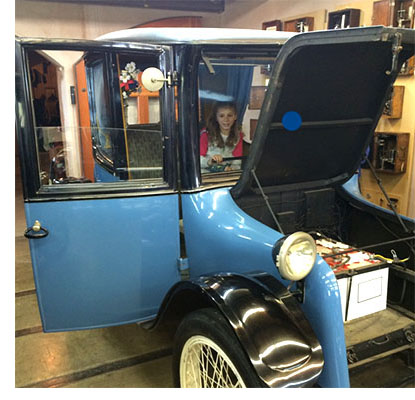 Electric cars were actually introduced around the same time as combustion engine cars and for a brief time had strong interest from consumers. One of the first commercially successful electric vehicles was the ‘Detroit Electric’. I had the opportunity to see an original restored Detroit Electric last year at the Canadian Museum of Making. (www.MuseumOfMaking.com) The image to the right shows my daughter sitting in the sporty vehicle (an original Detroit Electric at the Canadian Museum of Making).

This vehicle was originally designed as a ‘Lady’s car’ for shorter trips in and around the city. I’m not making any sexist comment here, but as you can see in the photo, the car has features like vases for flowers and curtains in the windows (standard equipment), that were designed to appeal to a lady in the 1910-1930s era, when the car was in production. The car is also steered with a long lever, as opposed to a steering wheel, which I suppose in the days before power assisted steering, made the vehicle easier to steer. The car had a range of about 80 miles, or 130km, on a charge and a top speed of around 20 mph, or 30km/h, which was competitive with combustion engine vehicles of the day. The marketing for the car positioned it as a reliable vehicle that would allow a lady to run errands around town and not have to worry about cranking the engine of a gasoline powered car to start it. The museum has fully restored this vehicle and it currently runs on standard lead acid batteries that you would find in an electric golf cart. It did look like a fun and sporty car to drive around town, but unfortunately we weren’t allowed to take it for a spin.

Eventually combustion engine vehicles became more reliable, introduced electric starters, offered better range, faster fueling and better overall performance. The production of the Detroit electric stopped in 1939, partly as a result of the challenging economic environment of the Great Depression and partly due to the improvements in combustion engine technology that provided many advantages in performance, range and convenience.

Between 1939 and today there have been only a few notable efforts to develop electric vehicles and none that were of any particular commercial success. The American ‘Big 3’ automakers all had electric car programs through the 1960s and 1970s, but no vehicles were made for commercial sale during this time period. Arguably, the most notable electric vehicle to come out of this time period was the electric powered lunar rover vehicle that astronauts used during the Apollo 15, 16 and 17 missions to the Moon.

The first glimmer of a revival in passenger vehicles came in the form of General Motor’s EV1 that was introduced in 1996. The EV1 had a limited range of approximately 150km and less than 1200 were ever produced. This vehicle remains somewhat controversial and is the subject of the documentary “Who killed the Electric car?”. Part of the controversy arises from the fact that the vehicles were never sold to consumers, but leased on a short term basis. When the EV1 program was cancelled in 2003, GM recalled all of the remaining leased vehicles from consumers and nearly all of them were destroyed.

So what is different about electric vehicles this time around?

In my next two blogs I will explore some of the significant improvements in both electric and plug-in electric hybrid vehicles and take a look at why your next vehicle might take one of these forms.

Coming up in the next few weeks, I will discuss the electric car company Tesla and their innovative business plan to solve the ‘Chicken or Egg’ problem of electric cars and charging stations. I define this problem as - ‘what comes first, the electric car or somewhere to actually charge it?’. It is tough to build one without the other.

In my third installment on the topic I will take a look at the technology of plug-in hybrids and how this type of vehicle has the potential for disruptive change to fuel consumption patterns in the shorter term. The German automakers, Audi, BMW and Mercedes have made a significant bet on plug-in hybrid technology and are each introducing three or four plug-in hybrid models to their line-ups later this year.

The opinions expressed in this report are the opinions of the author and readers should not assume they reflect the opinions or recommendations of Richardson GMP Limited or its affiliates. Assumptions, opinions and estimates constitute the author's judgment as of the date of this material and are subject to change without notice. We do not warrant the completeness or accuracy of this material, and it should not be relied upon as such. Before acting on any recommendation, you should consider whether it is suitable for your particular circumstances and, if necessary, seek professional advice. Richardson GMP Limited is a member of Canadian Investor Protection Fund. Richardson is a trade-mark of James Richardson & Sons Limited. GMP is a registered trade-mark of GMP Securities L.P. Both used under license by Richardson GMP Limited.