I have decided to start a blog to share some of the insights and interesting trends that we are following in the market and in the world of technology. I have always had a natural curiosity for technology and have generally been an early adopter. I recently attended a conference called ‘Abundance 360’ that covered a number of interesting technology related themes and I would like to share the insights that I learned there.

A bit of background — Abundance 360 was started by Peter Diamandis who was the founder of the XPrize Foundation. His XPrize concept was modeled after the Orteig prize that was offered in the mid-1920s to the first group to complete a non-stop transatlantic flight. As you probably know, the first transatlantic flight was completed by Charles Lindberg with his solo New York to Paris flight in the single engine plane called the Spirit of St. Louis in 1927. Lindberg collected the $25,000 prize, rose to instant fame, and ushered in the age of modern aviation. Out of the many groups vying for the prize, Lindberg’s approach of building a simple, lightweight single engine aircraft mirrors the approach that won the modern XPrize. (A great book on Lindberg’s flight is Bill Bryson’s ‘One Summer America 1927’) Up until that point, aircraft were essentially a hobby industry and commercial flights didn’t really exist. The fact that someone travelled across the Atlantic non-stop in an airplane captured the world’s imagination. The number of commercial airline passengers in the US grew from roughly 6000 in 1926 to 180,000 in 1929, or a 30x increase in just 3 years.

The modern XPrize was a $10 million prize offered to the first team to launch a spacecraft meeting the following criteria: it must carry 3 or more people, be launched to an altitude of 100km above the earth and land, and be re-used and launched again within 2 weeks. This challenge was completed and the prize awarded in 2004, won by a company called Scaled Composites with the backing of Microsoft co-founder Paul Allen. Although they did spend $26 million to win the $10 million prize, the incentive prize concept proved that it doesn’t take multi-billion dollar government programs to successfully launch a spacecraft. By comparison, during the Space Shuttle program, each and every Space Shuttle launch (not including the construction costs of the vehicle or surrounding systems) was estimated to cost around $400 million. The Scaled Composites rocket, called ‘SpaceShipOne’, didn’t reach a true orbital altitude, but it did successfully usher in the era of commercial space travel. Today you can pre-book a space flight on Richard Branson’s Virgin Galactic that is scheduled to fly commercial space travelers in the next few years (provided you have a spare $USD 200,000 that is burning a hole in your pocket — check out www.VirginGalactic.com) We don’t recommend our clients sign up unless you are adamant to be an early adopter. As with any new development, in a few years it will be cheaper and safer.

After the first XPrize was awarded the XPrize group was approached by many influential people with ideas for other XPrize type concepts like the creation of a 100mpg car, creating a robotic lunar lander, and prizes for innovation in other areas like education, health, and environment. The concept evolved into what is now called the ‘XPrize Foundation’ and they oversee several dozen XPrize competitions that are currently underway with the help of notable trustees like, Larry Page (Google Founder), Elon Musk (Tesla/Spacex), Ratan Tata (Tata Group of India), Rob McEwen (Goldcorp), James Cameron (explorer and film director), Ariana Huffington (The Huffington Post), Dean Kamen (Segway PT), among others. (www.XPrize.org)

Peter Diamandis has since founded a University called Singularity University, which focuses on technology and leading edge innovation. He is also the founder of Zero Gravity corporation, Human Longevity Inc, and Planetary Resources (this company’s goal is to mine low orbit asteroids using robotic spacecraft and bring platinum and other rare minerals back to earth — sounds a bit crazy, but most of the technology already exists and they claim that they will have their first product back to earth by 2018 - more on this company in a later blog). He is clearly a well-connected big-thinker, and having the opportunity to spend three days with him and his peers and hear their thoughts on where they feel the world is headed was an amazing experience.

The conference covered a number of themes including incentive prizes, technology, exponential organizations and ideas, data mining and machine learning, crowdfunding, crowdsourcing, human longevity, and virtual worlds, among other things.

The first day was a meet and greet afternoon with fellow attendees, and an evening that showcased a number of fascinating technologies that are moving from the point of being deceptive (ie: Virtual reality goggles — what are they actually useful for? — why did Facebook pay $2B for a company called Oculus that had yet to launch any kind of commercial Virtual reality product?) to being disruptive (ie: Solar power dropping in cost by 75% in the past 5 years and going mainstream and making economic sense without subsidies).

Some of the highlights included:

There was also a display table covered with technology and products from the past 20-25 years that all currently fit in your pocket in the form of an iPhone (and in most cases a better higher quality format.) The table held everything from a TV, camera, video camera, VCR, DVD player, Walkman, Boombox radio, calculator, compass, thermometer, GPS, books, cook books, translation software, maps, encyclopedias and not to forget the telephone. The attached photo illustrates the power of exponential technologies. What will the next 20 years bring? 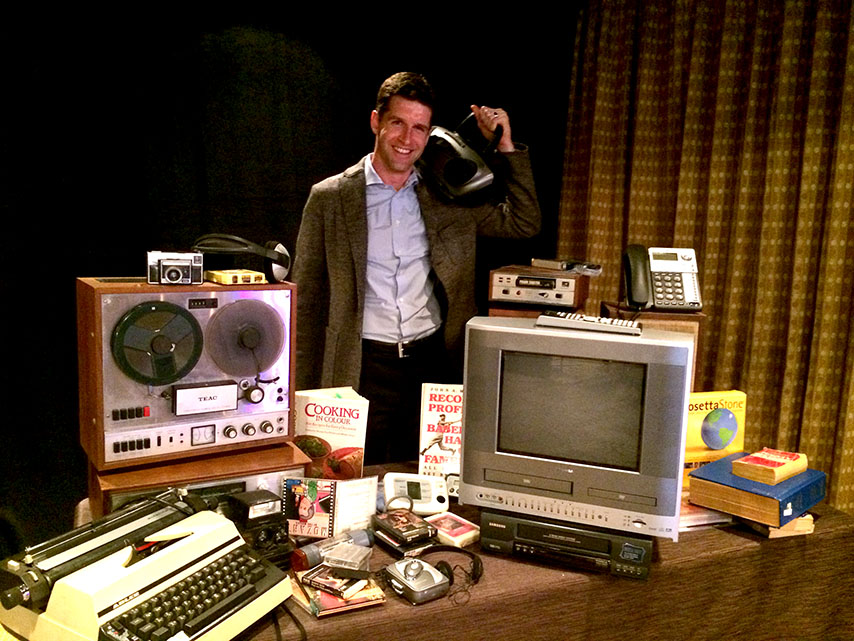 I will explore some of the concepts from the conference in more detail in my next few blogs, but I will jump to the end of my trip to conclude this one.

It seemed like a fitting way to end my trip to try out an Uber taxi for my cab ride on my way out to the airport. You may have heard of the Uber taxi service and the conflict that it has caused with the taxi drivers and their lobby groups in other cities. For example, the service isn’t yet allowed in places with a strong taxi lobby like Calgary, but examples of the success of the company and the disruption that it has caused are evident in places like San Francisco where approximately 60% of taxi rides are now run through Uber. From downloading the app on my iPhone to setting up an account took about 5 minutes, including download and install time. They basically only need your name, cell phone number and even capturing your credit card is accomplished by scanning it with the camera on your phone. (as an aside - we try to find every way we can to make our own business ‘frictionless’ as possible to keep up with the consumer experience that people are getting used to in other parts of their lives, unfortunately we are in a massively regulated industry that has little interest in adopting new technology and there is no end to the paperwork that comes our way.) From there you go to a screen that finds you on a map using the GPS in your phone that also shows the Uber cars in your area. You input your request for a ride from your location to the airport or wherever you want to go and one of the nearby drivers picks up the request. You can literally watch the car on the map moving down the street towards you and then see it as is comes around the corner into view. You get to see a profile of the driver and his rating as well as the type of car and license plate of the vehicle. The rating of drivers is a massive incentive for drivers to be clean and presentable, as well as keep their vehicles clean and well maintained. It is also an incentive for the driver to take you on the best route and not drive like a maniac. The drivers also rate you as a passenger, so it is a two way street in terms of a social contract. My driver offered me a bottle of water, some candy, asked me what radio station I wanted to listen to, whether the A/C temperature was ok, and so on. He made every effort to ensure that my ride was comfortable and I was taken care of. At the end of the ride, the entire financial transaction is completed behind the scenes with the app. Your credit card is automatically billed with one flat fee — tax, tip, flat rate for the route and distance etc. You simply get out of the car and off you go. So there is no fussing with cash, tipping or credit cards at the end of your trip. Uber has created a scenario where the often mediocre experience of taxi rides with an inattentive or complacent driver can instead be a pleasant and a seamless transaction. This is clearly a way of providing a service that is much better than the status quo. Calgary is regrettably beholden to the taxi lobby, which is serving to delay the inevitable and is certain to force a mediocre experience and service on us for as long as they are able.

I recently read an article that mentioned that Uber had just raised $USD 1.2 Billion at a $USD 40 Billion company valuation. How does a company that owns no taxis, has no full time drivers (all drivers are 3rd party drivers that are screened by the company) and only a handful of staff that are mostly programmers justify such a valuation? This is only a slightly lower valuation than the current market value of Suncor (currently trading at roughly $USD 44 Billion market cap), Canada’s largest energy company that produces over a half million barrels of oil per day and operates refineries and a retail gas station network across the country. The valuation of Uber may be a bit overdone, but this is a clear example of an exponential technology that has taken full advantage of being the first mover and disrupting an industry. Perhaps one day you will be able to enjoy this type of taxi experience in Calgary too.

The comments and opinions expressed in this presentation are, except as otherwise noted, the comments and opinions of the Author and may differ from the opinion of Richardson GMP Limited and should not be considered as representative of Richardson GMP , belief, opinion, or recommendations. The statements and statistics contained herein have been prepared by sources we believe to be reliable but we cannot represent that they are complete and accurate. Past performance may not be repeated. This material is published for general information only. Richardson GMP and the Author assumes no liability for financial decisions based on this information. Readers should obtain professional advice before applying any ideas mentioned to their own personal situation to ensure their individual circumstances have been properly considered. Richardson GMP Limited is a member of Canadian Investor Protection Fund. Richardson is a trade-mark of James Richardson & Sons, Limited. GMP is a registered trade-mark of GMP Securities L.P. Both used under license by Richardson GMP Limited.