So how do we win the COVID-19 pandemic battle?

“We don’t have any silver bullets, so we are just going to have to use a lot of lead bullets.” – to quote author Ryan Holiday from his book on stoic wisdom ‘The Obstacle is the Way’.

This simple analogy fits well with where things are today in the effort to fight the COVID-19 pandemic. There is no single treatment, cure or technology that will defeat the virus worldwide in one shot, but many small efforts will add up to make a difference.

The biggest silver bullet that everyone is waiting for is a vaccine. While the trials for a vaccine were started in record time of 63 days from isolating the viral strain to the first human trial, it is still many months away before the results are known and it is determined whether or not this vaccine is safe and effective. Until then, we need to rely on the simplest of lead bullets to fight the virus. One of these bullets is time. While humans retreat and isolate themselves, it buys time to better understand what has worked in other countries, time for doctors and healthcare systems to deal with those currently infected and time for technical minds to develop effective treatments and eventually a cure or vaccine.

Social/physical distancing and hand washing are the simplest and cheapest tools that are available to everyone. Stay at home and avoid public places. We encourage everyone to use online delivery services and to reduce the number of trips out to get groceries or necessary items to as few as possible. Wearing face masks and gloves when going out are also likely to be helpful. Not that a Home Depot dust mask will stop the virus itself, it is more likely to be effective as a simple reminder and barrier to touching your mouth and nose or rubbing your eyes when out in public, which are subconscious habits that most of us won’t admit to.

The following chart was provided by Dilbert creator Scott Adams on his Periscope/Twitter feed. 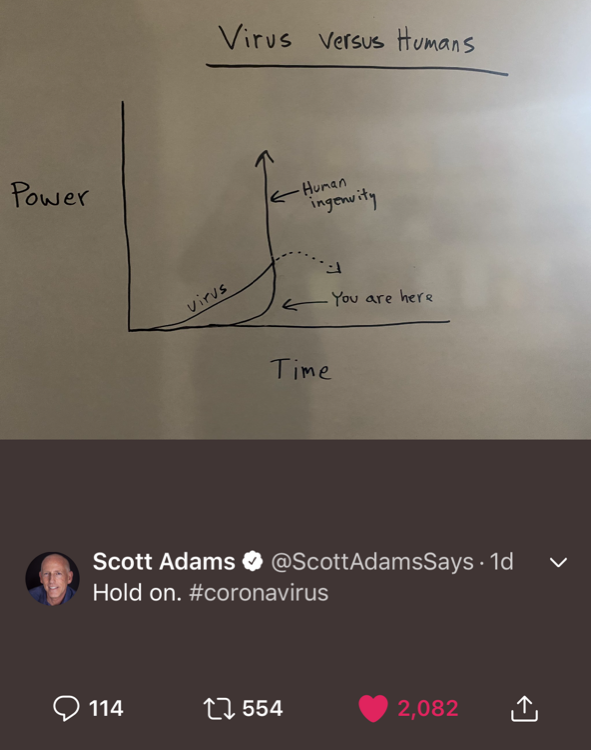 This virus has the attention of the world’s brightest technical minds and an unprecedented global cooperative effort is now underway. Even analogies to the space race between the US and USSR to land on the Moon or the ‘Manhattan Project’ to develop the atomic bomb don’t fit, as they were concentrated on single sectors and individual countries. Companies, researchers and governments around the world are all devoting available resources to the pandemic effort today.

Tesla has converted part of their California factory with the help of medical device company Medtronic to quickly ramp up manufacturing of ventilators. British vacuum maker Dyson has reported that they are able to design and manufacture ventilators on short order. Canada’s three largest auto parts suppliers have teamed up to re-tool and produce ventilators in their factories. There are even online videos of how to make a ventilator at home with off-the-shelf parts.

Testing of new and repurposed drugs for treatment of those infected are underway with several showing promising results. Hydroxy-Chloroquine is already approved for other uses and is being trialed in several countries to treat COVID-19 infected patients. Gilead Science is currently testing a new drug called Remdesivir as a potential anti-viral treatment for those infected. These are only two examples of treatments that may be helpful, but many others are underway. Not every test or drug will be effective, but it is likely that some will work. 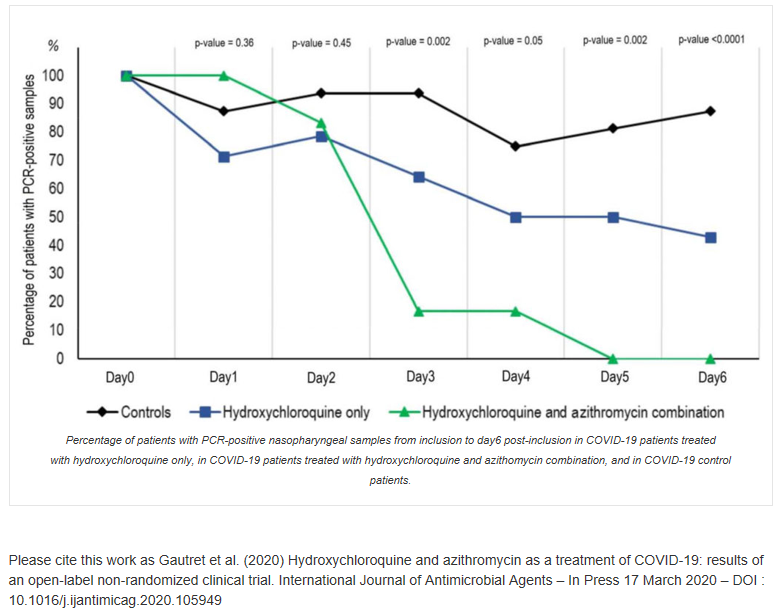 While early stage and small scale, the test result above does show a promising initial result for the use of a Hydroxychloroquine and Azithromycin treatment.

While treating those that are infected and building the necessary supplies and resources that are needed to address the acute need and demand on the healthcare system, they are not a long-term solution to solving the underlying issue. Either a vaccine to prevent the general population from falling ill and further spreading the virus or a way to isolate those who are infected until the virus runs its course and preventing the spread to others are the only long-term solutions. Either that or to simply let the virus run wild and devastate the population before the so called ‘herd immunity’ is developed and the virus can’t spread any further as everyone has already developed a tolerance. The last option seems unpalatable to most rational people as the near-term death toll and stress on the healthcare systems would be staggering.

The pandemic is really an information problem disguised as a health problem.

If we could figure out who is contagious or infected and who they have visited, we could quarantine only those people and everyone else who is not infected could resume normal life. The main bottleneck today is testing for who is infected.

Is there really a way to test everyone in a city, country or continent all at once?

For a simple thought experiment, imagine a scenario where everyone in North America could be tested in a 3 to 4-week timeframe and remain quarantined during this period. If we could do this, the pandemic would be essentially contained in a month. Resources could then be devoted around the world to the same effect. This seems like an idealistic scenario, but it is certainly plausible if you follow a logical path.

A few days ago, Abbott Labs announced that they have developed, and the FDA has approved, a testing device that will provide a positive COVID-19 test result in 5 minutes. This is a remarkable feat when compared to the hours or days that current tests take. Using this testing device for a simplistic example, we can calculate roughly how many testing machines and how long it would take to test everyone in North America (and eventually everyone on the planet). The current populations of Canada, USA and Mexico combine to roughly 500 million people. If a testing machine from Abbot can run a test in 5 minutes, using round numbers this works out to around 250 tests per day, per machine (assuming they could run 24 hours per day with a bit of down time between tests). Therefore, in a 3-week period a single machine could test about 5000 people. To test every person in North America in a 3-week timeframe, it would take 100,000 testing machines distributed to major centres across the country. This seems like a large number, but Abbot isn’t the only company with a fast and effective test.

How long will it take to manufacture enough of these or other similar testing machines? To put some context to the scale of global technology manufacturing, Apple and Samsung routinely manufacture over 20 million iPhones and Galaxy smartphones each per month. While building a smartphone is obviously different than building a medical testing device, the modern smartphone is also likely to have more sensors and computing power than a benchtop testing device. Could a technology manufacturing facility be re-purposed from building laptops, iPhones or other gadgets to making COVID-19 testing machines at scale? It doesn’t seem implausible that 100,000 or even a million testing machines could be produced relatively quickly when factories already manufacture smartphones and all the necessary, chips, sensors and hardware by the millions each month.

Is the cost prohibitive? Even if these testing machines cost $100,000 each (which seems high), purchasing 100,000 of them would cost $10 Billion. This seems like a huge sum, but in the context of a $2 Trillion dollar aid package that was recently passed in the United States, $10 Billion is only 0.5% of the total US pandemic relief package. There is clearly cash available to ramp up production in a ‘war-time’ manufacturing effort and the cost is essentially a rounding error in the overall relief budget. Rolling out this test, combined with other available testing devices and existing testing equipment, the effort certainly seems attainable in a relatively short period of time.

I realize that this example is overly simplistic, no test is 100% accurate and there are many logistical constraints to orchestrating this type of wide-scale testing. Forcing essentially everyone on the planet to stay home is also an unprecedented move and there is clearly the will to find solutions. The announcement by Abbott Labs is only one example or many that made the headlines. Another medical company Henry Schein announced a test that works in 15 minutes and tests for the antibodies that result from the body fighting the virus and can determine whether someone currently has the virus or had it in the past and still has some residual immunity. Other companies and researchers are working on other testing methods and the time and cost to test is likely to come down even further as availability increases and the technology improves.

While the numbers of infected people continue to ramp up and the headlines of the death toll increase by the day, looking past the peak of the pandemic to the other side when we are through it is challenging. Imagine a world where a test for COVID-19 (and perhaps tests for a slate of other infectious diseases at the same time) is a routine part of life. Similar to how security ramped up at airports after 9/11 and the ‘shoe bomber’ incidents, we are now scanned, patted down, electronics separated and swabbed, our shoes are taken off and we can only bring small containers of liquids onboard an airplane. A hypothetical new world past the COVID-19 pandemic could include infectious disease testing of every passenger before they board an airplane as part of a new security screening process without even slowing the process down, as the results could be available before you even have your shoes back on. Preventing disease spread could save more lives in the long run than airport security screening ever has. In a world where a test for COVID-19 only takes 5 minutes, a new normal could be waiting for a test result before visiting an elderly family member at a nursing home or testing every passenger before they board a cruise ship or testing healthcare workers on a weekly basis or even at the beginning of their shifts. 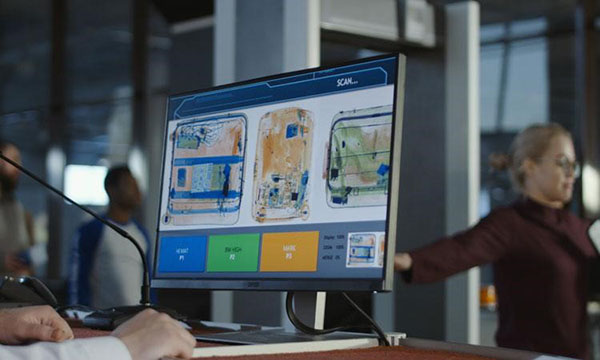 Human ingenuity has ramped up to an incredible pace. While the headlines and case numbers continue to get worse, the level of knowledge and technology that is being developed in the background without making the headlines continues. This pandemic won’t be over next week or even next month, but we can at least look beyond to a world where we are past it and imagine a future where life is a bit different, but essentially back to normal.