The summer of scooters

Looking back over the last few months, as summer draws to a close, one of the events that drew the most buzz this summer was the introduction of electric scooters to Calgary’s streets. Two rival California based start-ups ‘Lime’ and ‘Bird’ introduced 1000 scooters each to the city in a 16-month trial program to battle it out for market share and test the viability of the business model here in Calgary.

It is interesting that electric scooters have been around for decades but have only recently become prevalent as a mode of transportation. Part of the reason that they have only taken off recently is the fact that batteries have improved in terms of cost and power to weight ratio. The main reason seems to be the convenience of the business model that these companies provide.

Calgary’s citizens were already familiar with the Lime e-bikes that were introduced last October, so those with the Lime app could immediately grab a scooter and ride away. Lime’s e-bike launch took place in the middle of a snowstorm last year so started out slowly through the winter months. (I wrote a blog last year about how introducing electric bikes to Calgary’s streets in October seemed highly out of touch with the local climate and the city’s harsh winters.).

The launch of the scooter program was much better timed, as the trial started in June and caught the summer months with the best weather. The scooters seem to be more approachable and fun so, have a broader appeal than the e-bikes. I have seen people from all walks of life, both young and old, zipping around on the sidewalks and around downtown on them. Although it is not permitted by the user agreement, a popular thing to among young couples is to share a scooter and embrace as they ride around downtown. I even witnessed my firm’s CEO and my branch manager coming back from a meeting from across downtown each on their own Lime scooter (not sharing one) and grinning from ear to ear. At that point I knew I had to test one out. 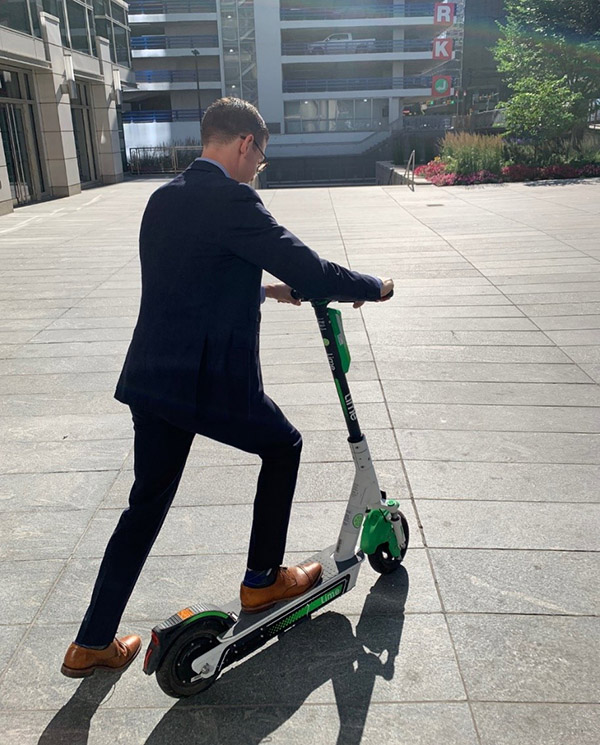 My assistant accompanied me to photograph my first trial and we headed out behind our building to the courtyard. The regular smokers that hang around in the courtyard area looked on in bemusement as I tried to figure out how to scan the QR code to unlock and operate one of the scooters that was parked behind the building. After a few minutes of fussing with the scooter and the app the scooter made a friendly chime noise indicating that it was unlocked and ready to ride. 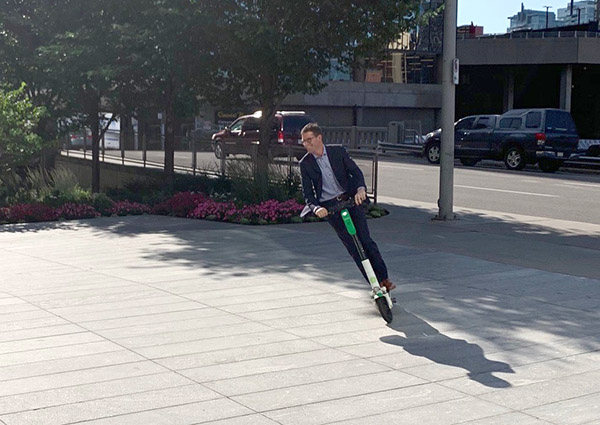 The scooters are very simple to operate and with a few initial pushes to get going and then pressing the throttle lever the electric motor kicked in and I was on my way. The scooters are designed with a speed limit of 20 km/h. After taking a few laps around the courtyard to get the hang of it and to further amuse the onlookers, I was off to tackle the city’s bike lanes.

The novelty of the system and the business model that drives these companies is the fact that renting a scooter almost instantly by the minute and being able to leave it at your destination is a very convenient way to get around. Anyone can pay up $500-$800 for a similar scooter and own it privately, but then the owner must worry about parking it, locking it up or carrying it into the building with them wherever they are going and also remembering to charge it overnight at home. It is essentially the same business model as the Car2Go system for smart cars but on an even smaller scale. The Lime and Bird have taken advantage of the ‘convenience store’ model where people use things occasionally and end up paying a bit more for an item on a per unit basis but consume smaller amounts. Renting a car for the weekend is most often cheaper than a Car2Go rental for the same time period, but most people only rent them for a few minutes at a time. The combination of GPS, camera enabled smartphones and long-lasting lightweight batteries and cities that allow these companies to roll out their scooters onto city streets has created a feasible business model for that last mile (or kilometer depending on your preferred unit of measure) transportation.

The city’s by-laws stipulate that the scooters are not to be ridden on city streets among vehicle traffic and are only to be ridden in the shared bike lanes, pathway system and on the sidewalks. In contrast the e-bikes are not to be ridden on sidewalks and restricted to use on the streets, the shared bike lanes and pathway systems. The other main difference between the two, is that helmets are mandatory on the e-bikes and only recommended on the scooters. This last rule seems to be completely ignored by riders of all types, as I have yet to see a rider wearing a helmet on either Lime’s e-bikes or the new electric scooters. 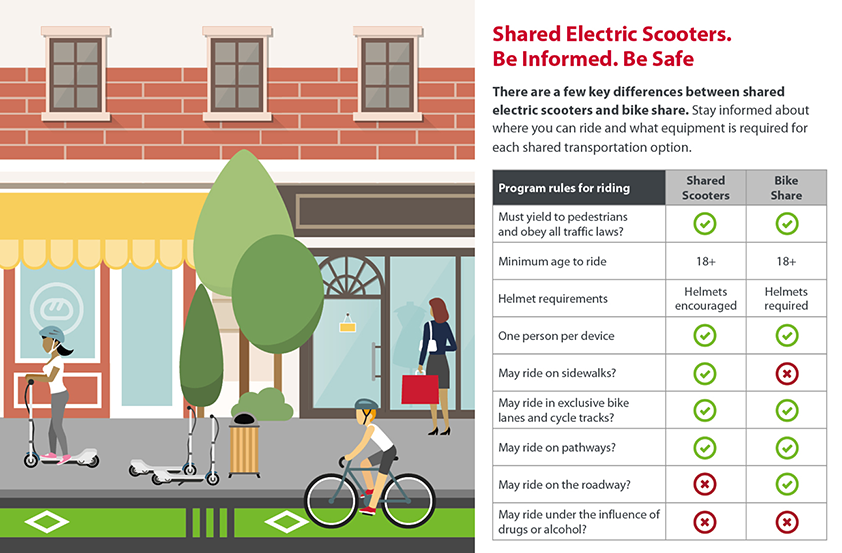 Each of the bright green ‘Lime’ scooters and the black ‘Bird’ scooters has some minor differences, but both follow essentially the same business model and a similar pricing structure. A 10-minute ride costs about $3.50 and 20-minute ride on either type costs about $7, which is more than the cost of a transit fare, but likely much cheaper than the cost of a taxi or Uber ride for the same distance. The convenience of grabbing a scooter and dropping it off exactly at your destination is undeniable and for most people, the extra convenience would be justified for a shorter trip. Users seem indifferent as to what type of scooter they jump on, as the only minor inconvenience to picking one over the other is the act of downloading the company’s app and setting up an account on a smartphone.

Lime has expanded aggressively and is now operating in over 90 US cities and 200 worldwide. So far, they are only available in three cities in Canada – Calgary, Edmonton and Montreal. Calgary and Edmonton seem to be represented by a single dot as a lonely northern outpost on the North American map. 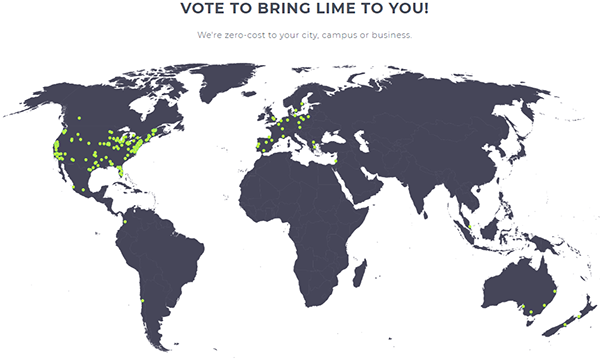 The initial trial program seems well received by citizens, but it has not gone off without issue. Safety is a concern as some people tend to ride aggressively or do so while intoxicated and many injuries from accidents have been reported. The other issue is people leaving them irresponsibly blocking sidewalks, building entrances or driveways when they leave them parked at the end of their trips.

Other cities that have launched scooter programs have seen numerous controversies. San Francisco and Santa Monica issued permits to several companies to the point where scooters were literally clogging up the sidewalks. There were even cases where frustrated locals would toss the scooters in the ocean or in dumpsters as a statement of protest. I haven’t heard of cases like this in Calgary, but I have seen some parked in odd places.

As with any new technology, there are some bugs that need to be ironed out. Initial popularity seems to be quite positive but, whether the initial buzz of people trying them out fades and they become simple and practical fixtures to get around the city remains to be seen. 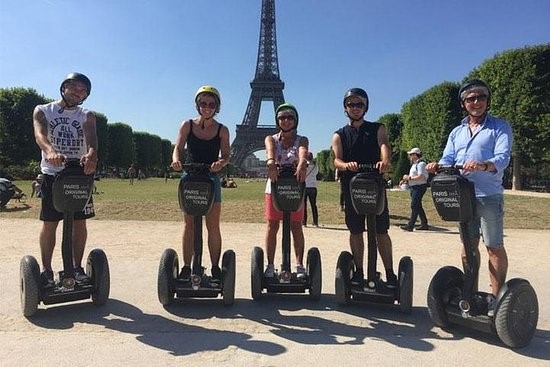 And whatever happened to the Segway?

Introduced in 2002, the two wheeled self-balancing ‘personal mobility device’ was touted a technology that would change civilization and potentially displace cars as a main form of transportation. For whatever reason, they never really caught on in anything other than a few specific niche markets. To date I have seen ‘Segway tours’ for tourists in popular cities and security guards riding on Segways patrolling airports and shopping malls. However, seeing an individual on a privately-owned Segway is still a rare sight. The Segway has many advantages as it is more stable, safer and equally fast as an electric scooter, but for whatever reason the introduction of electric scooters has taken off while the Segway remains a footnote in technological history. Perhaps the ‘nerdiness factor’ has something to do with it. You can look and feel pretty cool zipping around on an electric scooter, but it is impossible to feel like anything, but a nerd or a tourist on a Segway. 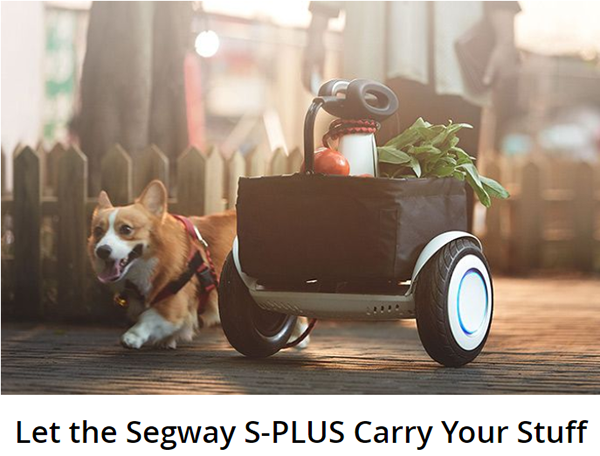 The Segway company still exists and sells both electric scooters and the self-balancing Segways for the exact same price of around $699 (USD). The self-balancing Segway is still in roughly the same format at the original 2002 version and now there is a robot version of the Segway called the ‘Loomo’ that functions as a personal robotic helper that can carry groceries or walk a dog or follows you along as your own personal R2-D2 type robot. You might look like a nerd riding a Segway, but having your own personal robotic helper following you around carrying your stuff actually sounds pretty cool. It has the added benefit that you can ride around on top of it as you can with any other Segway. The onboard camera and speakers allow you to communicate with others and see what the robot is seeing so you can even send it to meetings in your place allowing you to be in two places at once. Perhaps the ‘Star Wars’ future is just around the corner and the original Segway was just ahead of its time. 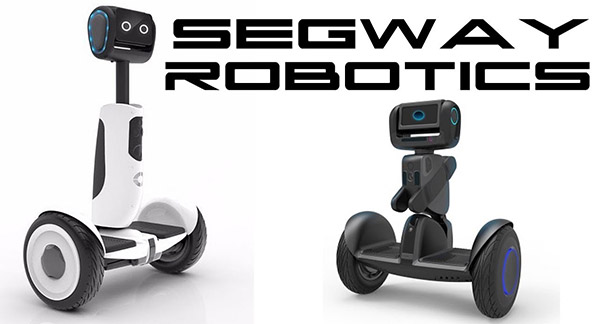 What might really launch the Segway business model would be the ability to rent their ‘Loomo’ robots on demand. Imagine if there were robotic helpers scattered on city streets that could be summoned and rented by the minute to walk your dog, run errands, attend meetings or carry you around? Applying the ‘Lime scooter’ business model could really launch a robotic future. Perhaps the Segway was ahead of its time but had the business model of renting cars or scooters on-demand existed back in 2002, history may have played out differently for this technology.