My last blog on electric cars received a few comments from readers, which are always welcome. (It is nice to know that people actually read these blogs!) One reader suggested doing an analysis of whether the adoption of electric cars has an overall benefit in reducing emissions. Their view is that most of the North American (and global) electrical grids still rely heavily on coal and natural gas for base load power generation. Therefore, charging a so-called ‘zero emissions’ electric car on the grid doesn’t actually reduce emissions and simply shifts the source from the exhaust of the vehicle to the smokestack of a power plant somewhere else. It is a nice thought that every electric car will only consume the electrons that come from renewable sources, but unless they are charged exclusively from the owner’s personal rooftop solar array or some other purely ‘green’ source of power, this isn’t the case. The reader made a valid point, so I was curious to find out the answer and crunch the numbers and see what the real-world benefit is and how it stacks up compared to the hype. 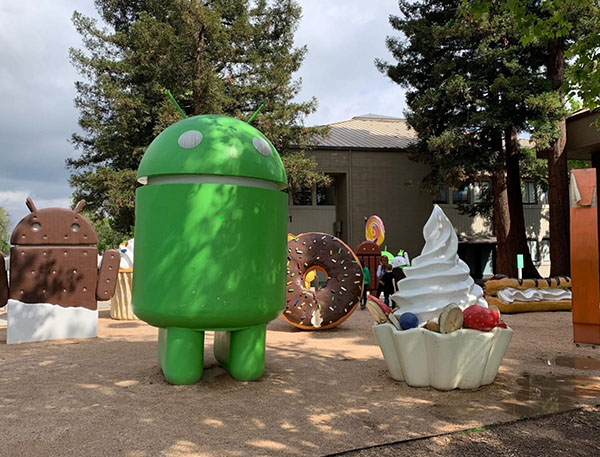 I recently visited the Google/Alphabet campus in Mountain View, California for a photo-op of their ‘Android’ sculpture garden (and visit to the merchandise store, of course). In the parking lot next to the visitors centre, I noticed a dozen parking spots had solar arrays covering each spot. Parked and charging each parking spot was an electric vehicle used by the onsite security to patrol the sprawling corporate headquarters. In an ideal world (and sunny California climate) this type of arrangement probably works quite well to charge a fleet of vehicles for this purpose and likely results in a zero-emissions fleet of vehicles.

The photo below shows the set-up:

However, not everyone lives in California or has installed a personal rooftop solar array for their exclusive for charging their electric car. The Google campus is obviously a very specific use case and doesn’t reflect reality for most drivers or homeowners. Taken a step further, even if a rooftop solar array is installed on a home, it is most likely that the vehicle needs to be used during the day and wouldn’t be parked in the garage during the day hours. Most people use their vehicles to get to work or drive kids around and then park at home overnight. To re-create the ideal ‘Google’ scenario would require a secondary battery that is at least as large as the electric vehicle’s battery to store the power during the day and then transfer it to the vehicle at night for charging. This may be the case for some green minded owners, but it is likely that most drivers will simply opt to charge from the existing electrical grid.

If we assume that most electric cars sold will be charged from the local electrical grid, is there really a benefit to driving an electric car?

Well, it depends on where you live and charge the vehicle. Simply using the overall power grid for Canada is one approach, but as I noted above, it is not accurate to think that the electrons that are consumed in Alberta would be sourced from Hydro-electric projects in Quebec.

Canada – The overall electricity generation mix in Canada is: 60% Hydro, 15% Nuclear, 9% Natural Gas, 9% Coal, 4% Wind and 2% Biomass/Geothermal with a few percent solar and other sources making up the balance according to the most current National Energy Board Statistics.

Source for all charts and data: National Energy Board of Canada

Comparing these four provinces, the starkest contrast is between Alberta which is almost entirely (90%) coal/natural gas sourced electricity, and the other three provinces which are almost entirely renewables or nuclear (>95%).

The simplest example that I could think of to provide a direct comparison between a gasoline powered vehicle and an electric car is to compare two similar-sized vehiclesand calculate the resulting CO2 emissions for each of the vehicles to travel the same distance. For further simplicity, and given that BC, Ontario and Quebec all generate 95%+ of their electricity from zero emissions sources, we can do a comparison of charging in Alberta vs the other three largest provinces.

So how does it look?

A new Tesla S with long range battery (100kwh) has a claimed range of around 600km. Comparing the Tesla to a similar size gasoline vehicle (The main competitors in its class are the Mercedes E or BMW 5 series) which have a fuel economy of around 10l/100km. To compare ‘apples to apples’, it would take about 60 litres of gasoline to drive the same distance as a fully charged Tesla Model S which, would consume 100kwh of electricity.

According to the US EPA’s online calculator – a 60l (15.85 gallon) tank of gasoline produces 141kg of CO2. The amount of CO2 produced from burning gasoline would be the same regardless of which province the car is driven.

How much CO2 is produced from 100kwh of electricity generated in Alberta? 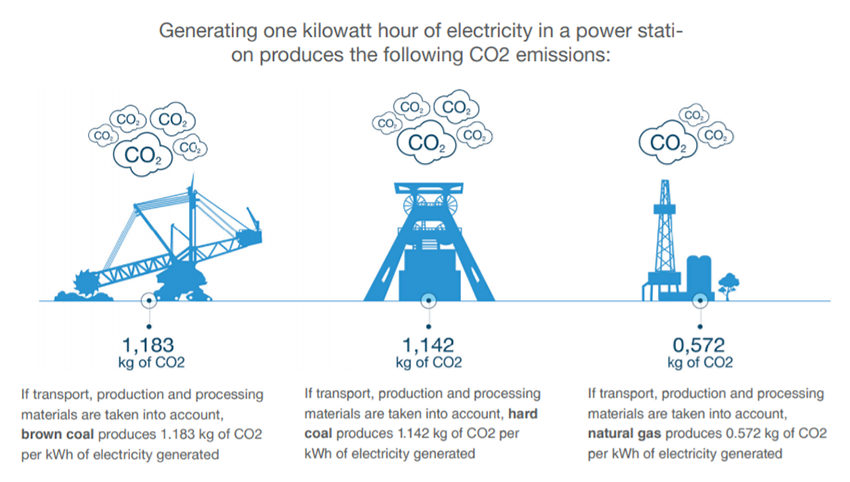 How much CO2 is produced from 100kwh of electricity generated in BC, Ontario or Quebec?

Given that these provinces produce electricity almost entirely from Hydro and renewables (or Nuclear in the case of Ontario) the resulting emissions are very small; between 1-4kg of CO2 per 100kwh of electricity generated coming from the small percentage of fossil fuel derived electricity in their grids.

Even in the fossil fuel dominated province of Alberta, the difference is a reduction in CO2 emissions by nearly half (-45%). This is in a province with an electricity grid that is one of the most heavily dependent on coal and natural gas in Canada. If the electricity is generated purely from coal, the difference is less striking, but Alberta has plans to phase out and convert the existing fleet of coal generation to natural gas over the next ten years, so the ratio should improve slowly over time.

The comparison assumes that both cars are driven under similar conditions using the government rated fuel economy numbers. We don’t get into the difference between ‘stop and go’ driving in city traffic compared to highway cruising, but it is reasonable to assume that if both cars are driven aggressively or conservatively, the ‘fuel economy’ of each type of vehicle would suffer or improve by about same amount.

It should be noted that the one driving condition where the fuel economy of electric cars suffers more than gasoline vehicles, is in cold weather. Gasoline and diesel-powered cars generate significant excess heat from their engines, even while idling, that is more than sufficient to heat the cabin of the vehicle. Electric vehicles rely solely on battery power to run the onboard electronic systems including cabin heat, heated seats and steering wheel, in addition to keeping the battery itself warm enough to function properly. I have seen the range on an electric car drop significantly in cold temperatures, and at extremely cold temperatures (-25C or colder) the range of an electric car falls by about half. In the same extremely cold conditions, a gasoline powered car would have virtually the same fuel economy as in mild weather (unless we account for the time spent idling to warm up the vehicle if it is parked outside). Therefore, the 45% reduction in emissions from an electric car driven in Alberta is negated under extremely cold conditions, as the car would consume about twice as much power to go the same distance.

So, are electric cars the answer to reducing CO2 emissions?

It depends on which province you live in and how the power used to charge the car is generated. In provinces that have abundant hydroelectric power (or Nuclear in the case of Ontario) the gains are significant. In the prairie provinces where electricity is generated mostly from coal and natural gas there is a benefit most of the time, but not on the harshest of winter days. 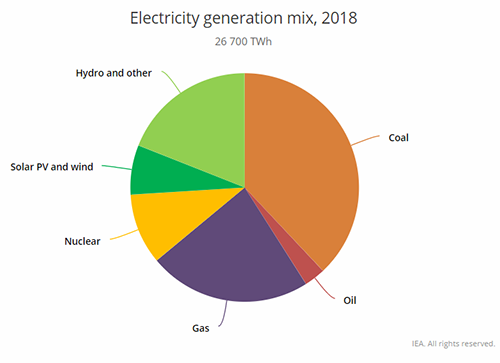 Globally the electricity generation mix is roughly 2/3 derived from fossil fuel sources according to the latest International Energy Agency (IEA) data. This is a less fossil fuel intensive mix than Alberta’s (and most of the world’s population doesn’t live in a climate with such harsh winters), so the widespread adoption of electric cars will still have the effect of have reducing overall emissions significantly. In regions that are endowed with plentiful hydroelectric power, the difference is basically a drop to zero emissions, but obviously not everyone lives in one of these regions. For the ‘zero emission’ claim to hold true globally, the world would need a massive switch to renewable electricity generation, and this is a long way off. 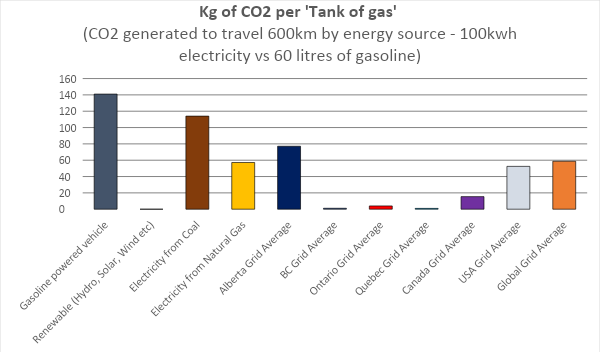 (Calculations by Author from NEB, EPA and IEA data)