A few weeks ago, I attended Peter Diamandis’ Abundance 360 conference in California and had the privilege to hear a number of fascinating presentations and panel discussions from the likes of Ray Kurzweil (author, inventor and futurist), Astro Teller (head of Alphabet/Google’s X division) as well as executives from Uber and many others from a wide range of disruptive industries.

The conference identified eight major trends that are unfolding at a rapid pace and are predicted to significantly disrupt how we live, work, communicate and get around. The eight major themes of communications, capital, transportation, energy, robotics, artificial intelligence, health, and space travel were discussed in various sessions throughout the conference. In this edition, my goal is to introduce the first two of these topics and touch on the potential in of each theme. I’ll expand on other themes in later blog posts as there was way too much info to cover in one blog post.

The conference started with a look back 100 years to how the world looked in 1918 to remind everyone of the advances that have been made and how much we take for granted.

In 1918, the literacy rate in North America was roughly 25% and only 6% of Americans graduated from high school. One hundred years ago, global travel was a time-consuming undertaking and it would take 5 days to travel from London to New York by ship and over 3 months to travel from London to Australia. The first vacuum tube electronic circuits were invented in 1918 and introduced the dawn of the computer age. Only 8% of homes had a telephone and a 3-minute-long distance call cost $11- this works out to $179 in today’s dollars, adjusted for inflation. This list of comparisons went on, but these first few were striking. Even 20 years ago, the power and capability of an average smartphone would have cost hundreds of thousands of dollars and taken up an entire room full of electronics. 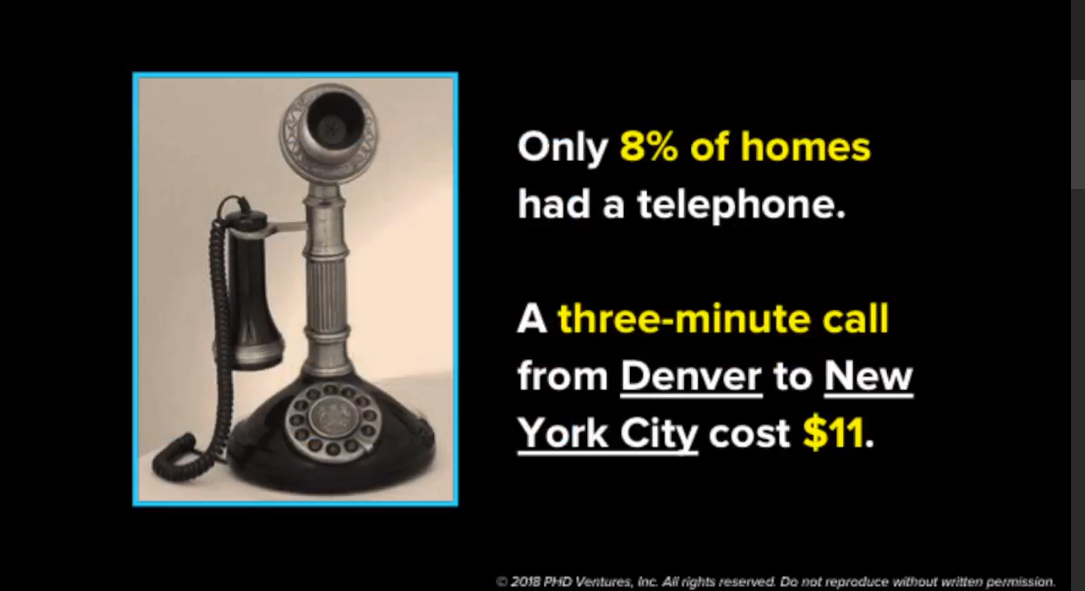 The Abundance of Communication – we are approaching a time where the entire planet will have access to high speed wireless internet communication for low to no cost.  The major trend is that today roughly 40% of the world’s population has access to high speed internet connections – in a few years from now the technology will have advanced to the point where essentially 100% of the world will have access to high speed internet and on top of this the global population is projected to grow to approximately 8 billion people.  Just as the developing world was able to skip over land line technology and jump straight to mobile phones, they will also be able to skip over dial-up and tethered communications and jump straight to mobile high-speed internet and potentially jump straight to electric cars.  The addition of over 4 billion new people online with the same quality of internet access that North Americans have today is a game changer for the sharing of ideas, commerce and communication.

The ‘X’ division of Google (now called Alphabet) has been working on their ‘Project Loon’ for a number of years and put it to the test after hurricane Maria hit Puerto Rico in September 2017.  Project Loon floats a fleet of helium balloons twenty kilometers above the earth to provide high-speed Wi-Fi internet access and cellular connections for free.  The trajectory of the balloons can be controlled by adjusting the altitude to catch the more consistent winds moving in different directions in the upper layers of the atmosphere.  The project successfully restored access to the disaster area and helped the relief efforts communicate during the recovery.  Technologies like these may eventually provide access to entire countries, without the need to build fixed towers or networks. 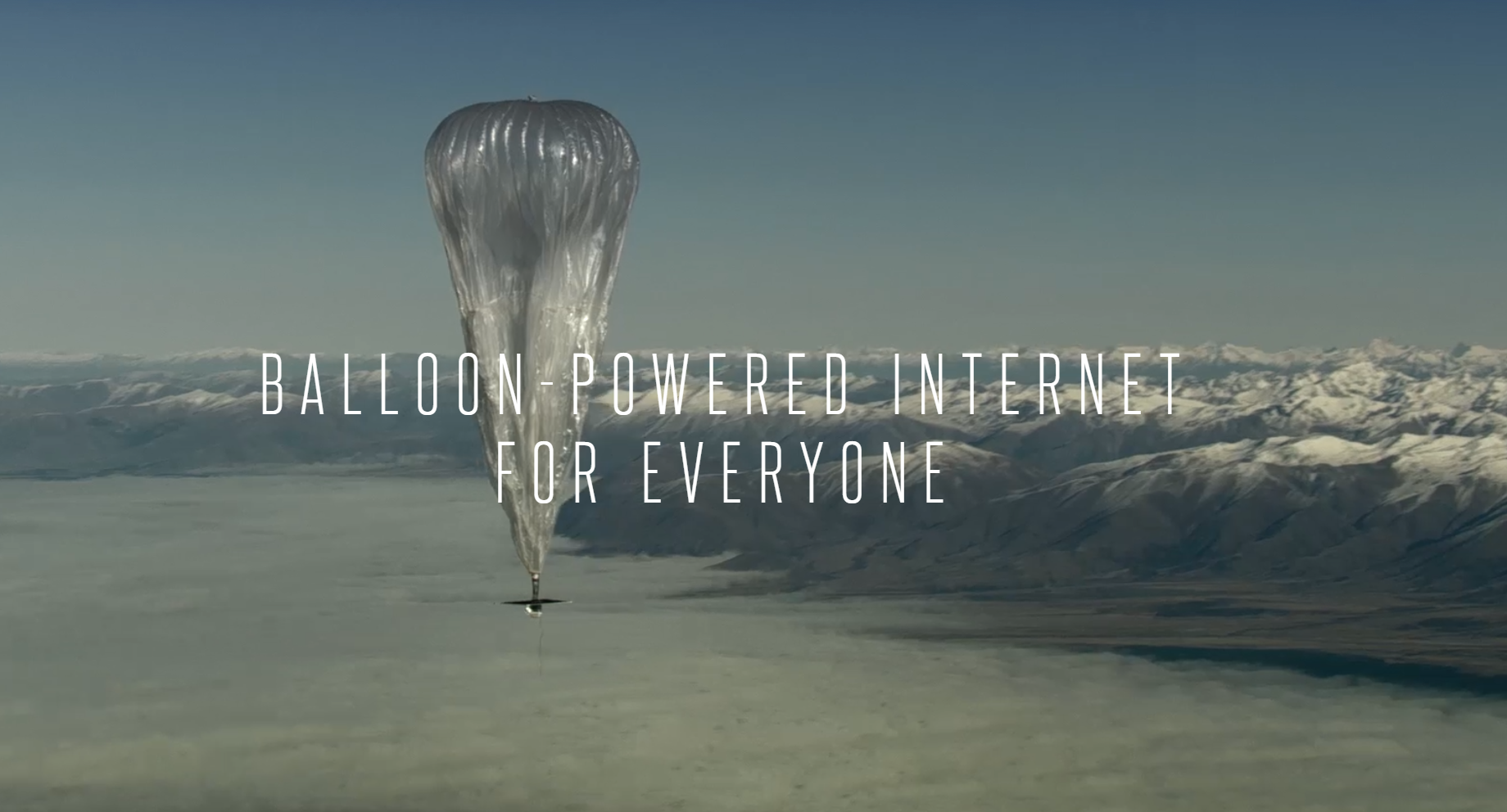 The other competitors in this sector have plans to launch arrays of hundreds of low orbit satellites that will provide high speed connections around the world by satellite.  A consortium called ‘Oneweb’ is backed and funded by Airbus, Virgin, Qualcomm, Softbank and Blue Origin (the rocket company founded by Jeff Bezos of Amazon fame) has plans to launch 720 satellites to provide a global communications network. Not to be outdone, SpaceX (Elon Musk) is planning to launch a network of over 4000 communications satellites and is scheduled to start launches in 2019.  This is all enabled by the miniaturization and cost reduction of computer technology and the reduction in cost of rocket launches.  A single launch can now place dozens of satellites in orbit, making the goal of launching hundreds of satellites achievable in only a few years.

Even if these projects hit delays or technical challenges, it is likely that most of these efforts will eventually succeed and in the next few years we will enter a world where every corner of the earth has access to a communications signal.

Abundance of Capital - The theme of capital and finance was largely focused on the rise of the cryptocurrency market.  Cryptocurrencies saw a 5000% increase in value in 2017 and nearly every week a new headline was made in reference to one of these new types of currency rising in value.

Over $6.3 billion was raised in new crypto ‘token’ sales in the past two years with some financings in the hundreds of millions being raised within a few hours of the offering.  The naysayers will argue that these ‘tokens’ are nothing more than a collective insanity, akin to buying magic beans.  However, the money behind these token purchases is far more than retail individuals and is entering the realm of institutional investors.  The graphic below shows the number and size of the various token offerings between 2016 and 2017. 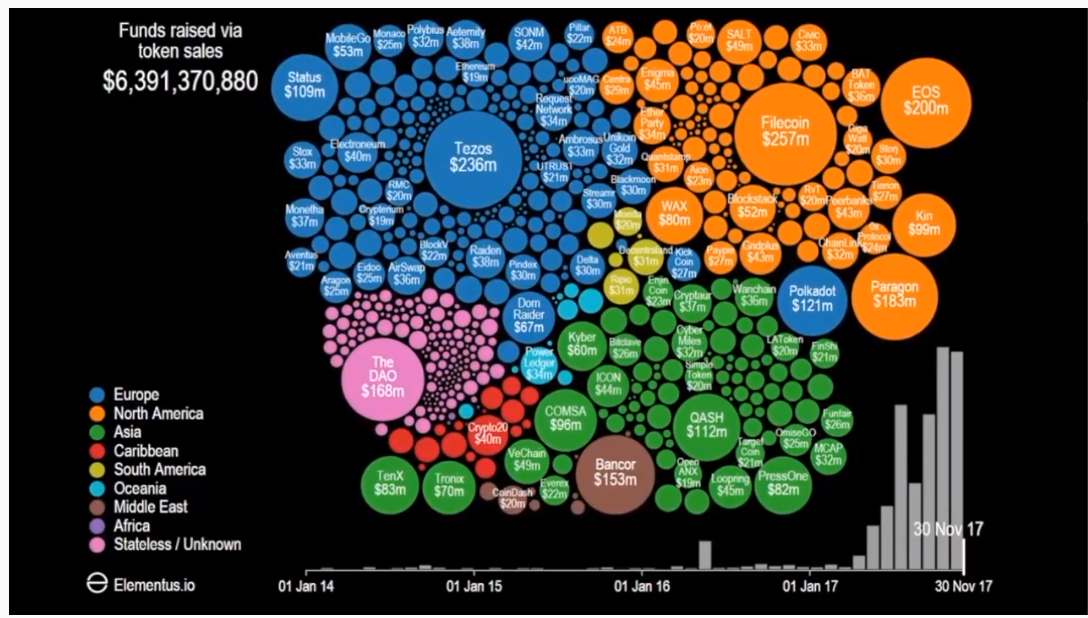 While it is still early days for cryptocurrencies, this sector is likely an area that is transforming from a deceptive technology to a disruptive technology.   An example that hit the public markets and transformed once storied brand, was the resurrection of Kodak.  Kodak emerged from bankruptcy a few years ago and languished as a shell of its former self with a limited market of film, papers and specialty products to those clinging to the medium of physical photography.  Kodak was once the poster child for a company that was a victim of disruptive technologies (and the company that had ironically invented and held the first patents on digital photography technology).  On January 9, 2018 Kodak announced the launch of their own cryptocurrency and their market value tripled during the trading day.  Kodak’s new cryptocurrency will allow a publisher of digital images to manage the use, rights and payments on their proprietary images.  Kodak stock has fallen in recent weeks, but it is still more than double where it was before the announcement.

Similar announcements have had seen other stocks rise as companies announce the implementation of some sort of ‘blockchain’ technology into their strategy.  On February 26, 2018, one of the world’s largest independent diamond miners announced that they are acquiring a blockchain company to track the trading of diamonds ‘on the blockchain’.  This company saw their share price rise over 25% on the morning that the news was announced.  I assume that the current system for tracking and trading diamonds is at least somewhat secure, so it remains to be seen whether applying a ‘blockchain solution’ will be a significant improvement.  The company’s shares are now worth 25% more, so the stock market is speculating that the company must be on to something more glamorous than digging holes in the ground in search of a prize gem.

My personal view on these types of announcements is analogous to the dot-com days where any company’s announcement of a foray into the ‘blockchain’ or ‘cryptocurrency’ technology world is met with investor enthusiasm, just as was the case where adding ‘.com’ to a company name would add to the share price.  As in any new trend, history will tout the winners and largely forget the ones that didn’t make it.  Remember that owning shares in a company gives the shareholder voting rights, regulatory oversight, a place on the capital structure and eventually a claim in dividends and profits of the company.  Even with these protections, the stock market and individual stocks still exhibit significant volatility.  Buying a company’s new ‘cryptotoken’ is largely unregulated and it is definitely an area where investors need to do their research and truly understand what they are buying.

It is also unfortunate that in its early days, hackers have been able to steal investor’s coins, in spite of the supposed security of the blockchain.  It is a rapidly changing sector and it will likely evolve like the ‘dot-com’ companies did, where many fell by the wayside while a dozen or so new companies rose to control the majority of the market.  We are always looking out for the potential gems in this emerging sector.