What is the environmental impact of Bitcoin mining?

What is the environmental impact of Bitcoin mining?

Since my last blog was posted the price of Bitcoin moved from around $USD 5,000 per coin to over $USD 20,000.  I figured that I had better get another blog out on the topic before the price moves up another 200-400%.

How is a Bitcoin ‘mined’?

One aspect of the cryptocurrency space that has garnered a lot of attention is the concept of ‘Bitcoin Mining’ or ‘Cryptocurrency mining’.  In the context of cryptocurrencies, the term ‘mining’ means that computers are used to verify transactions on the network and in turn they are rewarded for their efforts by being awarded a portion of the transaction as a ‘mining fee’.  These transactions involve running complex verification algorithms that must be verified by multiple parties before a transaction is deemed to be complete.  The term ‘Blockchain’ generally means a distributed network involving multiple verifications by different parties.  The theory is that because all transactions are publicly available on the main ‘Blockchain’ and have been verified by multiple parties, it is nearly impossible to change the records or falsify a transaction.  This is the opposite of a closed transaction network like those run by the major credit card companies where they control and verify all aspects of the transaction and keep all data private.

The term ‘Bitcoin mining’ or more generally ‘cryptocurrency mining’ is somewhat analogous to mining in the physical sense as the computers running the transaction algorithms are awarded new coins or tokens for their efforts in addition to a cut of the transaction fees.  As real mines consume diesel and electricity and use trucks and complex processing systems to move and crush ore, ‘blockchain mines’ use powerful computers and also consume electricity to complete their tasks.

Computer chips and electricity are both commodities and they can be sourced from the cheapest suppliers and locations.  If all it takes is a computer and cheap electricity to mine bitcoin, why isn’t everyone doing it?  The largest cryptocurrency mining operations are now showing up in China (with ample inexpensive coal power) and other jurisdictions with low-cost hydro power like Iceland, Norway and even Canada.  The other factor to be considered is that running a large array of computers to process the transactions generates a lot of heat.  Therefore, a location with a cool climate will have the advantage of natural cooling, and therefore lower air conditioning costs to cool the computer processors.

How much electricity does Bitcoin mining consume?

One interesting aspect of Bitcoin mining is that, depending on the estimate and efficiency of the computers running the algorithms, it takes between 200-250 kWh of electricity to confirm one bitcoin transaction.  At the current retail rate of electricity at my home in Alberta of $0.07/kWh, this equates to approximately $15 worth of electricity.  I checked my last utility bill and this is as much electricity as my household consumes in ten days to run everything including washing machines, dryers, televisions, iPads and children forgetting to turn of lights throughout the house.  By this math, all of the daily bitcoin transactions combined would consume around $4.5 million worth of electricity per day at the $0.07 kWh retail price.  Most Bitcoin mining operations source lower cost power than is available at the retail level to homeowners, but even at half the cost it is still a significant amount of money to run the mining operations.

By comparison, it is estimated that a single transaction on the Visa network consumes a fraction of a kWh (estimates of 0.0065 kWh or $0.0005 worth of electricity).  Therefore, the power cost for running the same number of Visa versus daily bitcoin transactions would be around $135.  This calculation is only a rough estimate of the power consumed to run the Visa network and doesn’t account for the number of people that work at Visa that have desktop computers and consume energy lighting and heating their offices or commuting to work.  However, the comparison between network efficiencies is striking and it is a problem that the designers of Bitcoin and other cryptocurrency networks will need to solve.

As an interesting side note, and to tie into my other blogs on electric cars, a news report recently circulated that a clever Tesla owner had rigged a bitcoin mining computer into his car and plugged into Tesla’s free supercharger station to run it while the car is charging on this ‘free’ source of power courtesy of Tesla’s charging network.  I would guess that the exercise of setting this up was probably more to highlight the owner’s tech expertise, rather than for any serious profit, as doing so would strand the vehicle at the charging station making the whole transportation and convenience aspect of owning the vehicle useless. 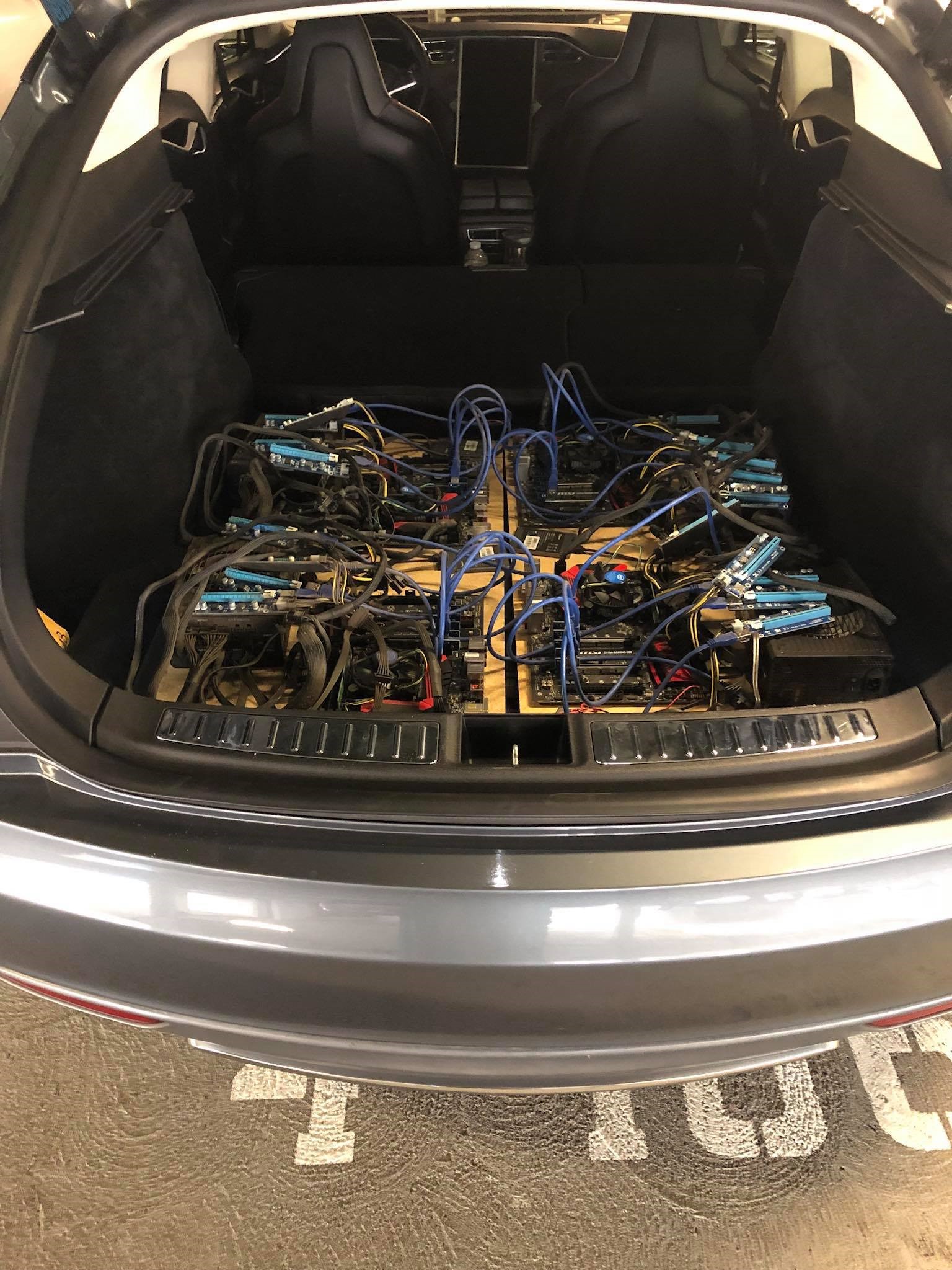 The US EPA website has a neat calculator tool that allows you to convert from electricity consumed to equivalent CO2 emissions assuming that the electricity was generated by means of burning fossil fuels.  Using the current estimate for the amount of electricity required to run the Bitcoin network of 34 Terawatt hours (one Terawatt is equivalent to 1,000,000,000 Kilowatts… don’t worry I had to look it up too) it produces the estimates in the image below – for example: running 2.7 million homes or 5.4 million cars running for a year.  Even if half or most of the electricity is generated from renewable sources, it is still a significant amount of emissions.  Could this electricity be used for other more useful purposes like lighting homes, refrigerating food or cooking meals? 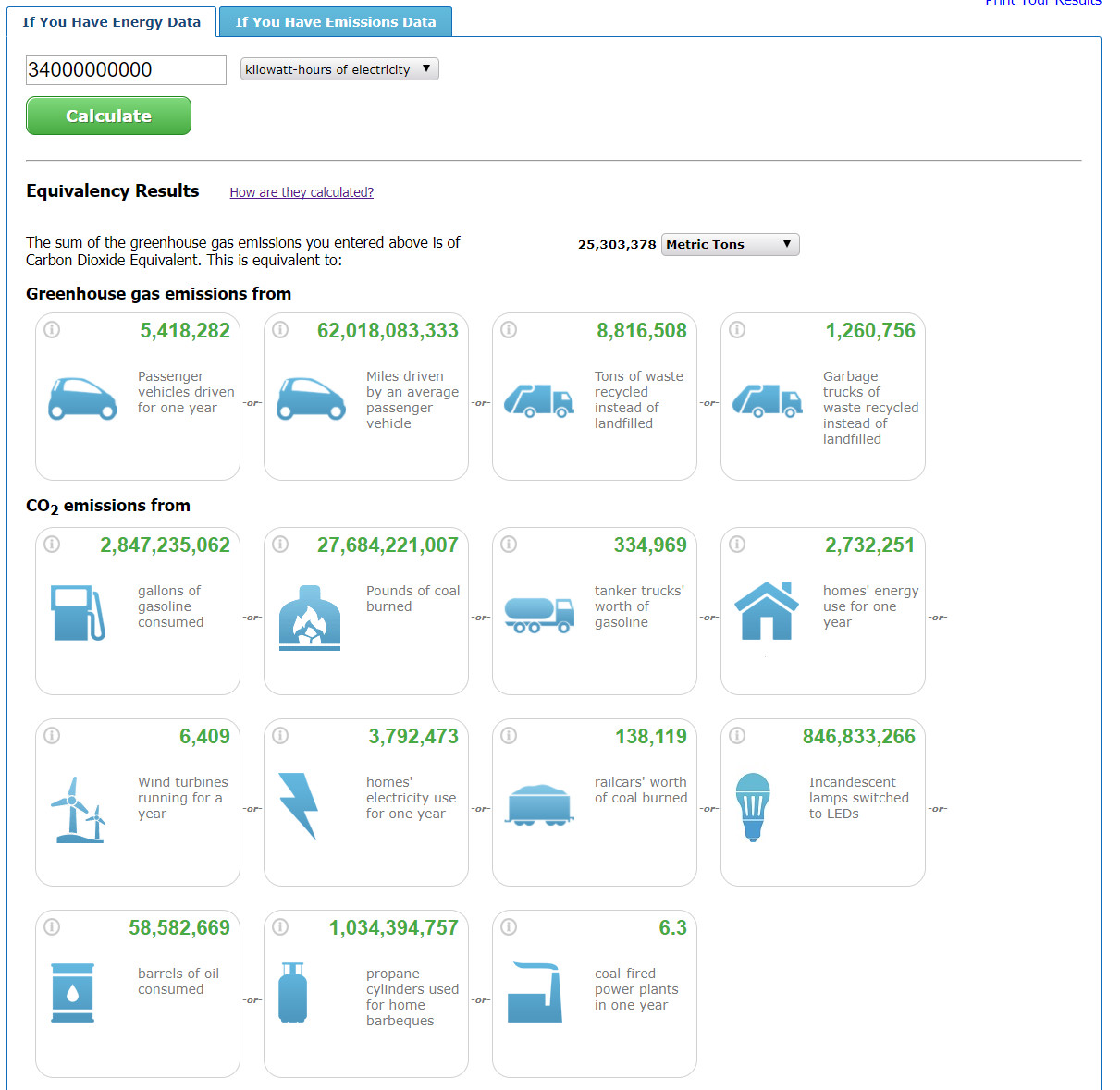 So how does this compare to other sources of emissions?

Putting this in context and using the assumption that half of the electricity used to mine Bitcoin is generated from renewable sources and half is generated from coal fired power or other fossil fuel source, then the CO2 output for running the Bitcoin network on an annual basis is approximately 12.5 MT (Mega tonne) of CO2 per year. This estimate is likely low, as approximately 60% of the worldwide Bitcoin mining takes place in China and Mongolia, countries where over 70% of the electricity is generated by coal and fossil fuels.

Using the global average electricity generation mix, which is approximately 39% coal, 22% natural gas, and 5% oil, a total of 66% fossil fuel based power the CO2 estimate rises to 16.5 MT per year. 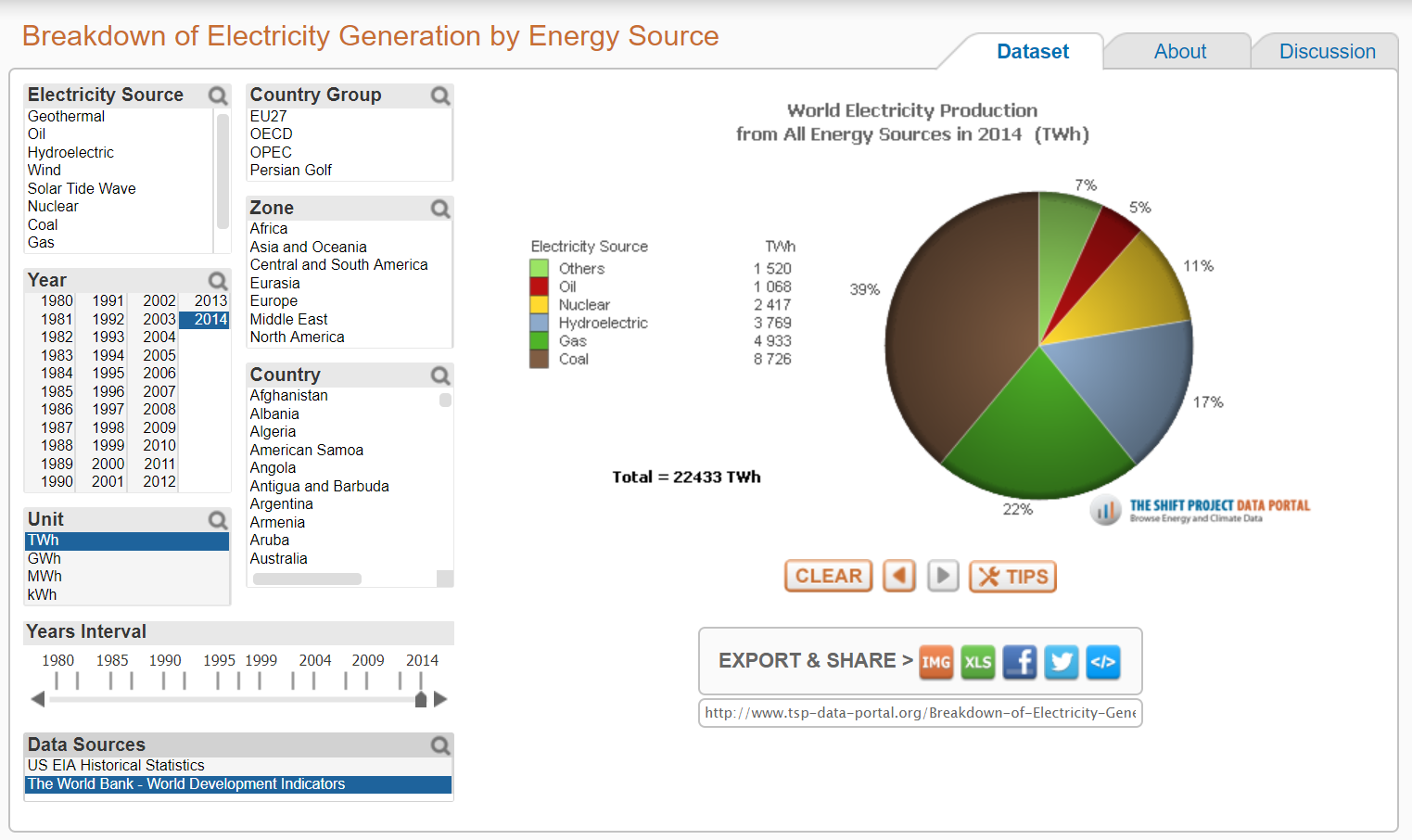 My simple math matches the site digiconomist.net, that estimates that the annual CO2 output for the network is 17.1 MT/year vs my estimate at 16.5 MT/year.  It should also be noted that Bitcoin is not the only cryptocurrency that is running this type of algorithm and creating this type of power draw.  There are now hundreds of other cryptocurrencies of varying popularity that run a similar process.  Some networks are more efficient than others, but even if the impact of all of the other cryptocurrencies combined is half as much as the Bitcoin network it adds the equivalent of another small country worth of electricity demand and resulting emissions.

If we estimate that the Bitcoin network’s electricity consumption produces around 17 MT of CO2 per year and all of the other cryptocurrencies combined produce another 8 MT we get to a total of around 25 MT per year.  By comparison the environmentally maligned oil sands produce approximately 64 MT per year of CO2 emissions.  Based on this estimate, the impact of running the Bitcoin/crypto networks is about 40% that of all of Canada’s oil sands projects combined.  If the growth in power consumption continues at the same exponential rate for another year, the emissions produced could exceed that of all the oil sands projects combined.

The growth rate of power consumption of the Bitcoin network is staggering and has moved up in lockstep with the price of a Bitcoin and the number of transactions occurring on the network.  A number of estimates show that the Bitcoin network already consumes more electricity than 159 countries including some developed and significant countries like Ireland.  Ireland isn’t a global powerhouse like the USA or China, but as a country of nearly 5 million people who generally enjoy the amenities of modern life, it isn’t an insignificant place either.

To extend this further, the power demand from cryptocurrency mining is up from essentially zero ten years ago and if the rate of increase that we have seen for these operations continues as they have this year, they could theoretically consume half of the world’s electricity in about 8 years.  This seems like an absurd notion, but so does the fact that cryptocurrency mining is already consuming as much power as it is today. 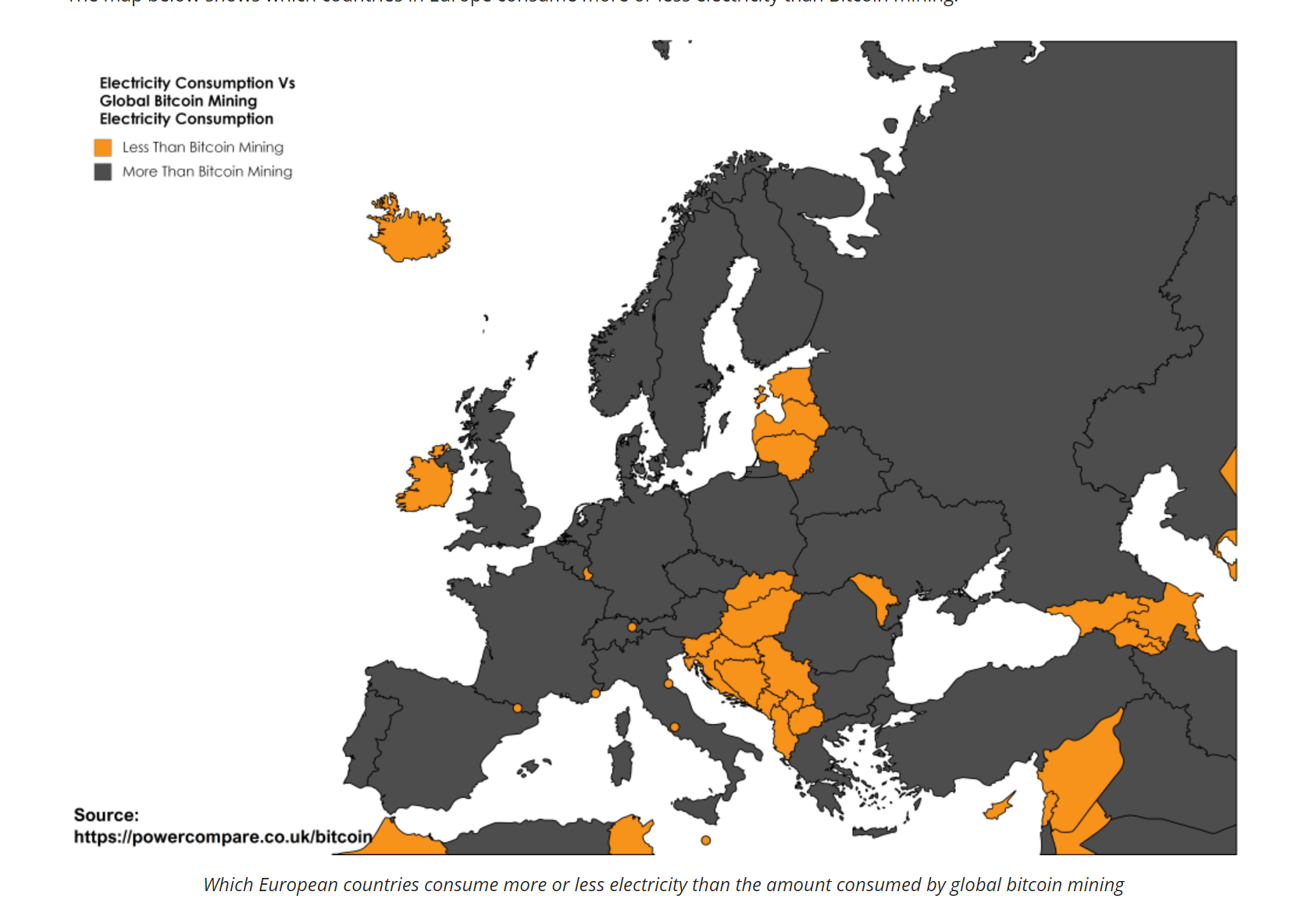 I wonder if the environmental protesters that are currently focused on the environmental lightning rod of the day: pipelines and oil sands projects, will shift their focus to this new source of power consumption and related emissions that is quickly approaching the same level of impact many major countries?  What value is being created through the consumption of such a vast quantity of electricity?

One-month chart of estimated power consumption of the Bitcoin network.